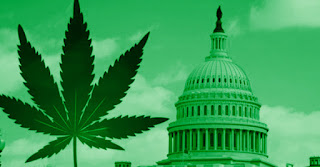 A bill with bipartisan support introduced in Congress this week is finally tolling the death knell for cannabis prohibition. By removing a notorious legal contradiction, the legislation would give precedence to state marijuana laws—making federal enforcement a thing of the past in states where medical and recreational weed are legal.

While its brevity is astonishing—without the obligatory title pomp, it would struggle to take up a single page—the legislation is capable of ending perhaps the most contentious provision in the ubiquitous War on Drugs. Simply titled the “Respect State Marijuana Laws Act of 2015,” the bill introduced by Rep. Dana Rohrabacher has incredible potential for substantial reform that makes its passage of paramount importance.

Like a pebble thrown into a still pond, once federal cannabis law is essentially nullified, states where lawmakers were previously reluctant to approve medical or even recreational use will be far likelier to approve decriminalization. As ripples go, once constituents see neighboring states end prohibition, the chance exists for those states with even the harshest pot penalties to succumb to public pressure and follow suit. It’s entirely feasible to expect the death of cannabis prohibition altogether, resulting from this single-sentence legislation.

From there, the ripples become waves.

If the de facto elimination of prohibition passes, the true beauty of the legislation will begin to shine. Consider the U.S. claim to fame as the world’s leading jailer of its citizens—a notorious achievement resulting from the insanity of sentencing due to the plant’s inexplicable designation as a Schedule I substance (Could there be any clearer evidence the War on Drugs is purely for government profit than lumping pot with heroin? But I digress). Removing the possibility for such penalties would immediately ease prison overcrowding and free court dockets to begin to deal with more serious criminal cases.

And that’s not all.

Besides the legal benefits, there are myriad beneficial economic corollaries stemming from passage of this little bill. Consider Colorado. In the state’s first year of legal weed, tax and licensing revenue alone topped $60 million—most of which the state devoted to school construction. That figure—though less than the anticipated $100 million—sharply contrasts the estimated $145 million Colorado had previously been spending to enforce cannabis laws, according to a 2010 Harvard study. With America’s seriously sketchy infrastructure in desperate need of repair and improvement, schools around the country in total disrepair, and countless other improvements in every state waiting to happen, there are endless possibilities. Ending cannabis prohibition would benefit everyone—ironically enough, even those who somehow still believe negative propaganda.

If ending prohibition takes away any possible legal consequences, people whose only ostensible criminal activity involves cannabis suddenly aren’t able to incur a related arrest record. This would make employment possible for countless people, not to mention better jobs for those who were previously constrained by a “dubious” criminal history. It’s even feasible to expect consequent additional legislation to stem from the original bill that would expunge past offenses related to cannabis. The total effect is destigmatization of the consumption and cultivation of a plant.
And that still isn’t it.

According to the latest figures available from the ACLU, the cost of enforcement of laws for pot possession alone are simply inexcusable—more than $3.6 billion each year. New York City is a prime example of the inanity of arrests resulting from unnecessary laws. In 1991, there were less than 800 total arrests for pot—but by 2010, less than two decades later, that number was a whopping 59,000. And the bias against minorities for those arrests is stunning, too—though cannabis use remains rather even regardless of race, black people are almost four times likelier to be arrested for possession. While ending cannabis prohibition won’t end institutionalized racism in America, it’s certainly a significant step forward in the effort.

There are plenty of other positive repercussions should this bill become law. It might just be time to get to know your Congresspeople a little better. Find your representatives by clicking here and for your senators click here.

8 Comments on "This Bill Will Finally End Cannabis Prohibition"