“That was when they suspended the Constitution. They said it would be temporary.”—Margaret Atwood, The Handmaid’s Tale

If there is one point on which there should be no political parsing, no legal jockeying, and no disagreement, it is this: for anyone to advocate terminating or suspending the Constitution is tantamount to a declaration of war against the founding principles of our representative government and the rule of law.

Then again, one could well make the case that the Constitution has already been terminated after years on life support, given the extent to which the safeguards enshrined in the Bill of Rights—adopted 231 years ago as a means of protecting the people against government overreach and abuse—have been steadily chipped away at, undermined, eroded, whittled down, and generally discarded with the support of Congress, the White House, and the courts.

We are in the grip of martial law. We have what the founders feared most: a “standing” or permanent army on American soil. This de facto standing army is made up of weaponized, militarized domestic police forces which look like, dress like, and act like the military; are armed with guns, ammunition and military-style equipment; are authorized to make arrests; and are trained in military tactics.

We are in the government’s crosshairs. The U.S. government continues to act as judge, jury and executioner over a populace that have been pre-judged and found guilty, stripped of their rights, and left to suffer at the hands of government agents trained to respond with the utmost degree of violence. Consequently, we are at the mercy of law enforcement officers who have almost absolute discretion to decide who is a threat, what constitutes resistance, and how harshly they can deal with the citizens they were appointed to “serve and protect.” With alarming regularity, unarmed men, women, children and even pets are being gunned down by the government’s standing army of militarized police who shoot first and ask questions later.

We are no longer safe in our homes. This present menace comes from the government’s army of bureaucratized, corporatized, militarized SWAT teams who are waging war on the last stronghold left to us as a free people: the sanctity of our homes. 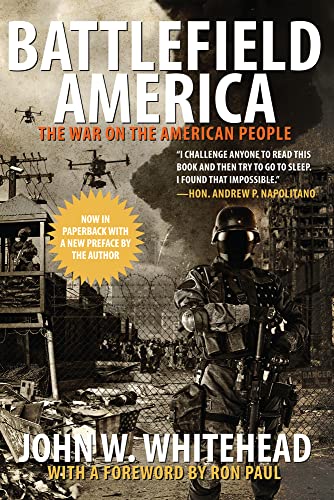 Battlefield America: The War On The American People

We have no real privacy. We’re being spied on by a domestic army of government snitches, spies and techno-warriors. This government of Peeping Toms is watching everything we do, reading everything we write, listening to everything we say, and monitoring everything we spend. Beware of what you say, what you read, what you write, where you go, and with whom you communicate, because it is all being recorded, stored, and catalogued, and will be used against you eventually, at a time and place of the government’s choosing.

We are losing our right to bodily privacy and integrity. The debate over bodily integrity covers broad territory, ranging from forced vaccinations, forced cavity searches, forced colonoscopies, forced blood draws and forced breath-alcohol tests to forced DNA extractions, forced eye scans, and forced inclusion in biometric databases: these are just a few ways in which Americans continue to be reminded that we have no real privacy, no real presumption of innocence, and no real control over what happens to our bodies during an encounter with government officials. The groundwork being laid with these mandates is a prologue to what will become the police state’s conquest of a new, relatively uncharted, frontier: inner space, specifically, the inner workings (genetic, biological, biometric, mental, emotional) of the human race.

We no longer have a right to private property. If government agents can invade your home, break down your doors, kill your dog, damage your furnishings and terrorize your family, your property is no longer private and secure—it belongs to the government. Hard-working Americans are having their bank accounts, homes, cars electronics and cash seized by police under the assumption that they have allegedly been associated with some criminal scheme.

We have no due process. The groundwork has been laid for a new kind of government where it won’t matter if you’re innocent or guilty, whether you’re a threat to the nation, or even if you’re a citizen. What will matter is what the government—or whoever happens to be calling the shots at the time—thinks. And if the powers that be think you’re a threat to the nation and should be locked up, then you’ll be locked up with no access to the protections our Constitution provides.

We are no longer presumed innocent. The burden of proof has been reversed. Now we’re presumed guilty unless we can prove our innocence beyond a reasonable doubt in a court of law. Rarely, are we even given the opportunity to do so. The government has embarked on a diabolical campaign to create a nation of suspects predicated on a massive national DNA database. Having already used surveillance technology to render the entire American populace potential suspects, DNA technology in the hands of government coupled with artificial intelligence will complete our transition to a suspect society in which we are all merely waiting to be matched up with a crime.

We have lost the right to be anonymous and move about freely.  At every turn, we’re hemmed in by laws, fines and penalties that regulate and restrict our autonomy, and surveillance cameras that monitor our movements. Likewise, digital currency provides the government and its corporate partners with a mode of commerce that can easily be monitored, tracked, tabulated, mined for data, hacked, hijacked and confiscated when convenient.

We no longer have a government of the people, by the people and for the people. In fact, a study conducted by Princeton and Northwestern University concluded that the U.S. government does not represent the majority of American citizens. Instead, the study found that the government is ruled by the rich and powerful, or the so-called “economic elite.” Moreover, the researchers concluded that policies enacted by this governmental elite nearly always favor special interests and lobbying groups. In other words, we are being ruled by an oligarchy disguised as a democracy, and arguably on our way towards fascism—a form of government where private corporate interests rule, money calls the shots, and the people are seen as mere subjects to be controlled.

We have no guardians of justice. The courts were established to intervene and protect the people against the government and its agents when they overstep their bounds. Yet through their deference to police power, preference for security over freedom, and evisceration of our most basic rights for the sake of order and expediency, the courts have become the guardians of the American police state in which we now live. As a result, sound judgment and justice have largely taken a back seat to legalism, statism and elitism, while preserving the rights of the people has been deprioritized and made to play second fiddle to both governmental and corporate interests.

We have been saddled with a dictator for life. Secret, unchecked presidential powers—acquired through the use of executive orders, decrees, memorandums, proclamations, national security directives and legislative signing statements and which can be activated by any sitting president—now enable past, president and future presidents to operate above the law and beyond the reach of the Constitution.

Unfortunately, we have done this to ourselves.

We allowed ourselves to be seduced by the false siren song of politicians promising safety in exchange for relinquished freedom. We placed our trust in political saviors and failed to ask questions to hold our representatives accountable to abiding by the Constitution. We looked the other way and made excuses while the government amassed an amazing amount of power over us, and backed up that power-grab with a terrifying amount of military might and weaponry, and got the courts to sanction their actions every step of the way. We chose to let partisan politics divide us and turn us into easy targets for the government’s oppression.

Mind you, the powers that be want us to be censored, silenced, muzzled, gagged, zoned out, caged in and shut down. They want our speech and activities monitored for any sign of “extremist” activity. They want us to be estranged from each other and kept at a distance from those who are supposed to represent us. They want taxation without representation. They want a government without the consent of the governed.

They want the Constitution terminated.

“We” may have contributed to our downfall through our inaction and gullibility, but we are also the only hope for a free future.

After all, the Constitution begins with those three beautiful words, “We the people.” Those three words were intended as a reminder to future generations that there is no government without us—our sheer numbers, our muscle, our economy, our physical presence in this land.

As I make clear in my book Battlefield America: The War on the American People and in its fictional counterpart The Erik Blair Diaries, when we forget that, when we allow the “Me” of a self-absorbed, narcissistic, politically polarizing culture to override our civic duties as citizens to collectively stand up to tyranny and make the government play by the rules of the Constitution, there can be no surprise when tyranny rises and freedom falls.

Remember, there is power in numbers.

There are 332 million of us in this country. Imagine what we could accomplish if we actually worked together, presented a united front, and spoke with one voice?