Protests were organized to mark the 50th anniversary of the Martial Law declaration in the Philippines in 1972. The hashtags #NeverAgain, #NeverForget, and #ML50 trended on Twitter on September 21 as netizens shared their thoughts and sentiments about one of the most controversial episodes in Philippine history.

Martial Law was declared on September 21, 1972, by former President Ferdinand Marcos Sr., and it lasted until 1981. During this period, Marcos ruled as a strongman who relied on the police and military to govern the country. Thousands went hungry and were killed through violent crackdowns.

After Marcos was ousted by a People Power uprising in 1986, his family went into exile in the United States. A government commission counted 11,103 victims of human rights violations during the Marcos dictatorship. On the other hand, human rights groups insist there were more victims who suffered at the hands of security forces.

Former President Marcos died in exile in 1989. His wife and children returned to the Philippines in the 1990s and were elected to various government positions despite facing numerous criminal and corruption cases. Their critics accused them of using ill-gotten wealth to rebuild their political regime. The son and namesake of Marcos was elected president in May 2022 amid allegations of election fraud and using disinformation to rewrite his father’s notorious dictatorship legacy.

In a pre-recorded interview aired on September 13, President Marcos Jr. insisted that Martial Law was necessary to defend the Republic from the armed communist and Muslim insurgencies.

And that’s why it was necessary to — in my father’s view at the time — to declare martial law.

What Marcos Jr. didn’t mention was that the armed rebels were mostly based in remote provinces and that this army was only formed in 1969. He also failed to mention that his father’s presidential term was supposed to end in 1973 if Martial Law had not been declared. Nor did he mention the millions of dollars his family pilfered from the treasury during this period.

Senate Minority Leader Aquilino “Koko” Pimentel III, whose father was a member of the political opposition during the Martial Law era, condemned the attempts to deny the atrocities of the Marcos dictatorship:

From a son who had seen his father suffer from the abuses of martial law and had witnessed his father imprisoned four times, I tell you this: the atrocities and abuses that transpired during this period were real – no amount of disinformation can change that.

Karapatan, a human rights group, published a statement from victims who had survived the Martial Law regime:

We are the living testament to the atrocities committed by the Marcoses and their cronies against the Filipino people. We are among those who endured and survived to tell our gruesome tales under martial law and to pass the torch of struggle of those who sacrificed their lives to fight for our basic rights and freedoms.

While our physical scars may have already healed years ago, our trauma and pain brought by such dark times remain. And now, with the return of the Marcoses in Malacañang [presidential palace] and the absence of justice for those whom they had victimized over the years, it feels like we are walking in another nightmare.

Today feels very much like 1972. Books are being banned. Media outlets are being blocked on the internet. Activists and revolutionaries are demonized as “terrorists”. Freedom of expression is suppressed. Peaceful protests are violently dispersed. Communities are militarized.

Aside from the protest in Quezon City in Metro Manila, rallies were also held in the rural provinces. In Cagayan de Oro, students commemorated Martial Law by joining a prayer rally.

Members of the Xavier University – Ateneo de Cagayan gathered in front of the college chapel to remember and denounce the period of Martial Law in the Philippines. #NeverAgain #NeverForget pic.twitter.com/bUvFIM4A5b

In Cebu, various groups organized a rally in the city. One of the placards reads “Marcos Itakwil” which means “Reject Marcos” in the Filipino language.

IN PHOTOS: Progressive groups in Cebu called for justice for Martial Law victims in a commemorative protest march along Osmeña Boulevard on the 50th anniversary of the declaration of martial law under the Marcos Sr. dictatorship. (1/2)

In New York, protesters condemned the abuses of Martial Law while Marcos Jr. was delivering a speech at the United Nations General Assembly on September 20 (September 21 in Philippine time). The protest banners also include the name of Duterte, a reference to current Vice President Sara Duterte and her father, former President Rodrigo Duterte. Duterte is facing an investigation at the International Criminal Court for alleged crimes against humanity in connection to his role in enforcing the bloody “war on drugs” from 2016–2022.

SPOTTED: Ferdinand "Bongbong" Marcos, Jr. seen escaping from the New York Stock Exchange (NYSE) after he was set to have a bilateral meeting with Japan PM Fumio Kishida. 1/n pic.twitter.com/OxmuXaDklU

Back in Manila, candles were offered to all those who suffered and fought the dictatorship.

LOOK: Protesters light candles at the #ML50 program in UP Diliman pic.twitter.com/zSohIqAS2h

The following mural is a collaboration between veteran and young artists, which symbolizes five decades of resisting tyranny and the continuing demand to hold the Marcoses accountable for the excesses of the Martial Law era. 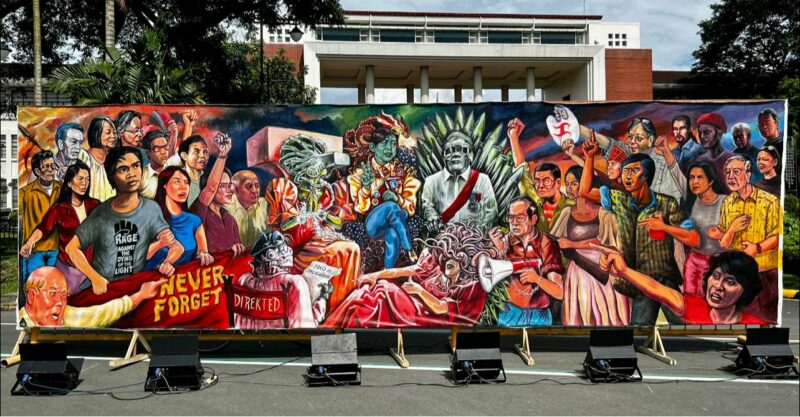 Mural at the #ML50 protest site. Photo from the Facebook page of Renato Reyes Jr.