The digital dollar is the endgame. No matter what side of the political spectrum you fall on, this will be the permanent and inescapable enslavement the ruling classes of the globe desperately need in order to remain in power.

You will own nothing, while a handful of people will own everything. You will exist if they allow it, be stolen from if they don’t like what you said, and be ruled over in a dystopia that makes our current situation pale in comparison.

A “white paper” published on the White House website calls for the creation of a “digital dollar” that, of course, will be controlled by the ruling class.  Much like the Federal Reserve currently has the sole role and responsibility to develop and print fiat currency with which they already control the population to some extent. But the difference here is that if all money was digital, the government and central banks will be one and the same. They could (and would) monitor our bank accounts; monitor all of our transactions; impose barriers to purchases of certain “unfavored” items, and even block access to our money or limit how much of it we could spend.

They will take what they want, and cut off your ability to spend for as long as they want.

“A United States central bank digital currency (CBDC) would be a digital form of the U.S. dollar. While the U.S. has not yet decided whether it will pursue a CBDC, the U.S. has been closely examining the implications of, and options for, issuing a CBDC,” the White House policy paper notes before touting the digital dollar’s “benefits.”

Of course, they’ve decided to pursue this. We all should know by now that they will need to fully control humanity if they expect to remain in power. Hopefully, enough people will see through this and the agenda will fail. “At last year’s Summit for Democracy, President Biden spoke about the importance of using technology ‘to advance democracies to lift people up, not to hold them down.’ If the U.S. launches its own CBDC, it should advance this democratic vision,” the authors wrote. 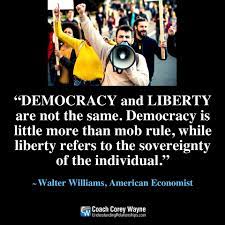 In a democracy, you’re supposed to get to choose your master and who to serve. That doesn’t make anyone any less a slave.

We had better figure out how to unite against these sociopaths or we face a very bleak future.