Silver prices have retreated since hitting a multi-year high in early March. While disappointing to bulls, they should find some encouragement in the white metal’s technical and fundamental drivers.

To begin with, gold and silver are still up for the year overall. By contrast, stock and bond markets are sticking investors with large losses.

Investors are finding out the hard way that in an environment of high inflation and rising interest rates, there are no safe havens in paper assets.

Precious metals aren’t immune from market volatility, but they are exhibiting more technical strength in this environment than conventional financial assets. 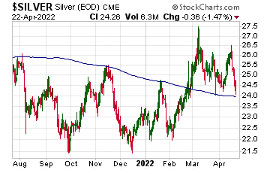 The 200-day moving average acted as resistance multiple times until it was broken decisively in March. It may now serve as support in the $24 range.

Of course, bulls would like to see long-term moving averages turn up. For now, they are reflecting choppy price action – something that will eventually give way to a directional trend.

The fundamentals for silver generally support the case for higher prices. Last year was a stellar one for silver demand, as confirmed by the Silver Institute’s recently released World Silver Survey 2022.

Bullion demand came in especially strong: “Physical silver investment (sales of silver coins and bars) leaped by 36 percent to 278.7 Moz, its highest level since 2015, as retail investors in North America and Europe, motivated by safe-haven and inflationary concerns, took advantage of periodically lower silver prices to purchase coins and bars.”

Supply, meanwhile, failed to keep up with demand. The silver market experienced a deficit of 51.8 million ounces, according to the World Silver Survey, the biggest since 2010.

This year, industrial demand for silver is expected to rise to a new record, driven largely by growth in solar and other electrical applications.

Investment demand is more of a wild card but is likely to remain strong given the threats of war and inflation, along with possible further underperformance of financial markets.

Trading out of assets that are being produced in surplus for those that are facing supply shortfalls is an obvious value play.

Inflation is a reflection of the fact that too many currency units are being created. Despite the Federal Reserve’s vow to try to tame inflation by hiking rates, total currency supply remains on an upward path.