Tech insiders (aka “Silicon Valley Parents”) have gone to great lengths to limit their own kids’ use and exposure to screens.  This includes making their nannies sign “no screens” contracts and sending their kids to private low tech or no tech schools.  This has been going on FOR MANY YEARS so they must have at least suspected that screen use could harm kids.

Of course health experts including the American Academy of Pediatrics (AAP) have been warning FOR MANY YEARS about kids’ use and exposure to screens, smartphones and other sources of wireless technology.  Activist Post has highlighted some of their warnings though it’s difficult to keep up with all of them (see 1, 2, 3, 4, 5, 6, 7, 8, 9).

Here’s another one courtesy of Environmental Health Trust:

Kids and smartphones: a warning for parents about harmful impacts

PhD researcher Sumudu Mallawaarachchi and Dr Sharon Horwood from Deakin University’s School of Psychology found that the more time toddlers and pre-schoolers spend on smartphones and iPads, the greater risk of negative impacts on their social, emotional, and cognitive development and sleep quality and quantity.

Kids and smartphones: a warning for parents about harmful impacts

Young children who spend large amounts of time on mobile screens are more likely to have problems sleeping and managing their emotions and behaviour, a new study has confirmed.

PhD researcher Sumudu Mallawaarachchi and Dr Sharon Horwood from Deakin University’s School of Psychology found that the more time toddlers and pre-schoolers spend on smartphones and iPads, the greater risk of negative impacts on their social, emotional, and cognitive development and sleep quality and quantity.

Ms Mallawaarachchi said the results of their recent study reveal the harms caused by prolonged use of mobile screens is likely to outweigh any perceived benefits for toddlers and pre-schoolers.

“Our research reviewed all the relevant national and international studies looking at developmental factors and mobile screen use in early childhood,” Ms Mallawaarachchi said.

“The findings so far indicate that toddlers and pre-schoolers who use mobile screens more often and for longer periods of time are more likely to have problems managing their emotions and behaviour and getting poorer quality sleep.

“But we also discovered huge gaps in our knowledge around the long-term impacts of mobile screen use in young children revealing the need to look more closely at the impacts of things like types and reasons for screen use by young children,” Ms Mallawaarachchi said.

The research team has launched a new research project which involves a national survey of parents of toddlers and pre-schoolers and the screen use in their homes.

Dr Horwood said that given their portability and web-connectivity, mobile screens may have a completely different impact on development compared to older screen technologies such as televisions.

“For example, we know that at least half of toddlers and pre-schoolers who use mobile screens use them on their own, so to understand how to manage screen use in early childhood we need to know more about how kids are using screens now,” Dr Horwood said.

“Overall, the negative findings are quite worrying given the wide use of educational apps that are available and considered beneficial for young children.

“We need further research exclusively on the impacts of mobile screens, instead of combining them with other types of screen use.

“We would urge parents of toddlers and pre-schoolers to respond to our survey and tell us about screen use in their home.

“Until we have better understanding of the impacts, parents should probably err on the side of caution with early childhood screen use. Given how critical early childhood is in terms of the vast amounts of brain development that occurs, the sooner we can establish healthy habits and lifestyle behaviours, the less challenges young children are likely to face as they develop,” Dr Horwood said.

The US National Toxicology Program found DNA damage in the frontal cortex of male mice, in the blood of female mice (1,900 MHz) and hippocampus of male rats (900 MHz) exposed for only a few months (Smith Roe et al.,  2020) as well as clear evidence of cancer in male rats exposed for two years (NTP 2018).

Turkish researchers have found harmful effects from wireless radiation such as increased sperm head defects and decreased weight of reproductive organ tissues  (Dasdag 2015); altered expression of some miRNAs (Dasdag 2015). “Conclusion: Long-term exposure of 2.4 GHz RF may lead to adverse effects such as neurodegenerative diseases originating from the alteration of some miRNA expression…”  (Dasdag 2015)

Scientific Research on Screens and Children 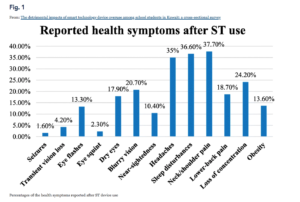 Bandara, Priyanka, and David O Carpenter. “Planetary Electromagnetic Pollution: It Is Time to Assess Its Impact.” The Lancet Planetary Health 2, no. 12 (December 1, 2018): e512–14.

Sangün Ö, Dündar B, Çömlekçi S, Büyükgebiz A. The effects of electromagnetic field on the endocrine system in children and adolescents. Pediatr Endocrinol Rev. 2015 Dec;13(2):531-45.

Be the first to comment on "Kids and Smartphones: More Warnings about Impact on Sleep Quality, Social, Emotional, and Cognitive Development"