After slamming President Trump for acting “like a king”, NY Gov Andrew Cuomo has mercifully allowed more businesses in the Empire State to finally reopen, even though COVID-19 cases haven’t seen anything approaching the kind of resurgences that officials have warned about.

Unlike pretty much every other state at this point (even neighboring New Jersey finally caved), New York hasn’t allowed the return of indoor dining. The issue is prompting an outpouring of rage directed at Cuomo and NYC Mayor Bill de Blasio, who have allowed protesters to gather night after night, while crushing the city’s small businesses. Adding insult to injury, de Blasio caved to the teachers union and spared more than 20,000 city employees who had been set for layoffs.

Gyms finally reopened in NYC Wednesday after city officials forced businesses to get cleared by the health department. Gyms around the state were allowed to reopen Aug. 24, but the delay until Sept. 2 was unique to New York City. 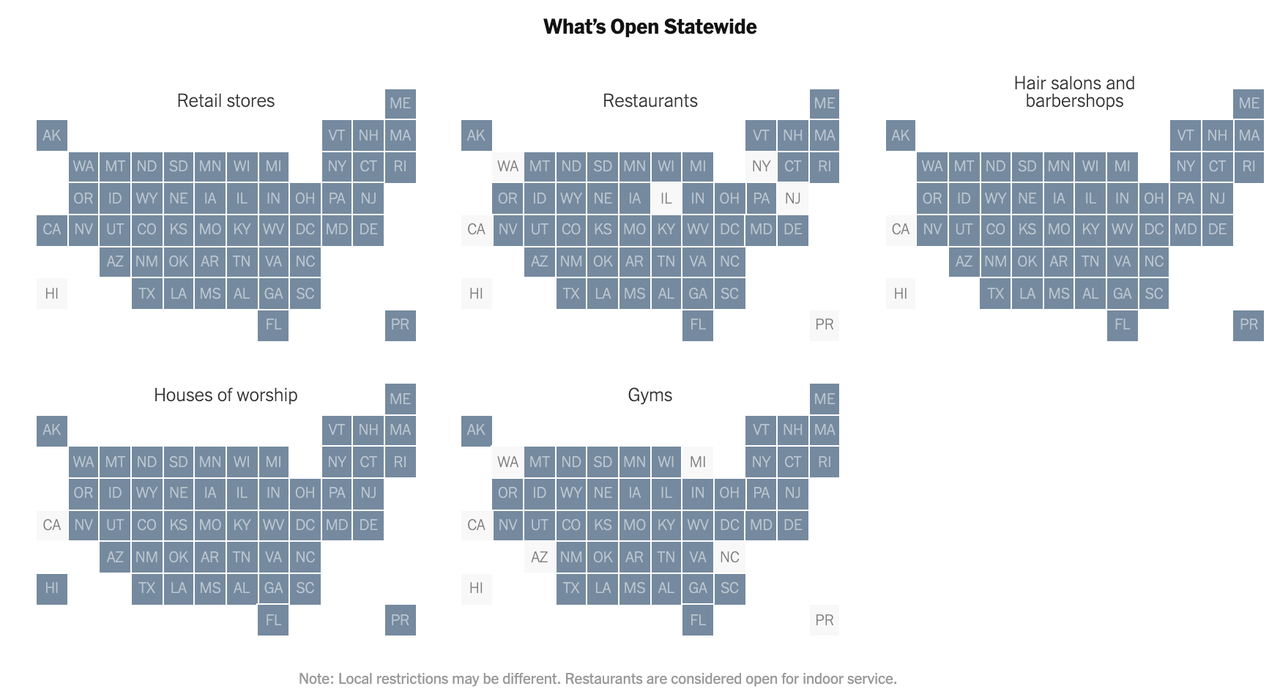 The map above is lightly misleading: Most of NY state allows limited indoor dining. NYC is the only city in the state that hasn’t authorized any form of indoor dining, despite the fact that it has consistently reported positivity rates below 1% for weeks.

On Thursday, with the country focused on vaccine news, Cuomo announced that the state would allow casinos and malls to reopen on a limited capacity on Sept. 9. But restaurants in NYC would remain closed for the foreseeable future.

While de Blasio pushes for Cuomo and him to cooperatively develop a timeline for the return of indoor dining in NYC, Cuomo responded with a thinly veiled taunt, again reminding NYC leaders that “they have no legal authority to make that decision” on fully reopening restaurants. While he suggested that he’s “amenable” to reopening restaurants, he insisted that the city needs to have a well-thought-out plan that must be approved by the governor.

After all, Cuomo is the one who has the final say.

“… We have major problems in New York City with the compliance on the bars. I have beseeched New York City to do a better job on compliance and enforcement,” Cuomo said during a telephonic briefing with reporters. “We put together a task force to do the enforcement on Long Island and New York City … We have taken state police resources from many places to do that enforcement.”

“My opinion is restaurants should open. The question is how?” Cuomo said Thursday.

He then went on to promise that a “timetable” for reopening would be hashed out by the end of the month, though the answer might be “good news or bad news.”

“I think it’s our responsibility to give them as clear an answer in the month of September as possible, of where we are going,” the mayor said Wednesday. “If there can be a timeline, if there can be a set of standards for reopening, we need to decide that in the next few weeks and announce it, whether it is good news or bad news.”

But restaurant owners, facing the destruction of their livelihood, are refusing to wait. A frustrated group of restaurant owners slapped Cuomo with a class action lawsuit urging a judge to overrule the governor and allow NYC restaurants to start reopening their dining rooms.

The suit is seeking $2 billion in damages and alleges that the state is violating the constitutional rights of the owners of more than 150,000 New York City restaurants, many of which have already closed permanently. One study published Thursday claims that 60% of NYC restaurants will likely be forced to close if indoor dining doesn’t return soon. More than 350 city restaurants have signed on.

One restaurant, Il Bacco in Queens, joined the suit to argue that customers can simply walk a few blocks away into Nassau County if they want to eat indoors.

NY State has reported nearly 470k cases, roughly half of those were confirmed in NYC.

We imagine the state’s liberal judges will side with the government. But as time goes on, more people are starting to doubt that the indoor dining ban is a safety issue. Instead, might this be another attempt by Cuomo to politically hamstring his most hated Democratic rival, de Blasio?