What happens when a city receives complaints about unlit walking paths?

A typical response to a lack of lighting on walking paths usually means that most cities would add light poles so people could see where they are going. But as you will see, the City of Hampton, Virginia’s response was anything but typical.

When 13 News Now reported that Hampton was installing solar-powered light poles along walking paths, I said to myself – good, that is what the everyone expected. But then something caught my eye.

Hampton’s “Digital City Transformation” will eventually replace most of their street lights with “follow me” light poles.

The city has installed fifteen 20-ft off-grid smart poles with built-in solar panels. Using LED lights and lithium batteries, the poles can store energy for up to eight days with no sunlight. The lights have “follow me” technology to illuminate the area where someone is walking, to save energy, and to reduce light pollution to the surrounding neighborhood. A security camera has also been installed to provide a live video feed to the police department.

Does anyone really think that “follow me” surveillance light poles are the answer to unlit walking paths?

The city plans on expanding public surveillance to “downtown on Queens Way, around the Settlers Landing Road parking garage, and the Mellen Street bridge.”

After some digging, I was able to discover that ClearWorld, LLC is responsible for helping police turn the city of Hampton into a Chinese-style surveillance city. 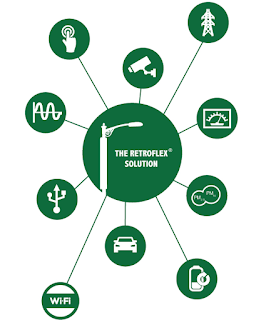 One has to wonder if ClearWorld felt emboldened by Amazon donating 15 Ring doorbells to Hampton residents via their police department?

The City of Hampton claims that at least three more cities are using Retroflex light poles to monitor the public. They are: Miami, Santa Fe, N.M., and Lafayette, La.

A 2016 report titled “Smart Cities Take Over” revealed ClearWorld’s plans to use “Follow Me” light poles to track people in real-time.

In urban areas we provide communications for intelligent parking and infrastructure for public WI-FI expansion, as well as emergency environmental sensors. Our technology is capable of real-time traffic monitoring and enhancing communications to provide solutions.

ClearWorld thinks that offering light poles with public USB charging stations will offset the fact that they are monitoring people and vehicles in real-time.

For residential areas, we provide better security with smarter lighting and remote surveillance camera monitoring.  At nearby parks and campuses we will provide security and emergency call buttons on light poles and USB charging stations options.

The city of Hampton’s “follow me” light poles are also equipped with Wi-Fi access and public charging ports.

Over the years, I have reported on how smart cities are using all manners of public surveillance light poles like, GE’s City IQ, Phillips Lighting Smart Nodes, Siemens’ CCTV cameras and Shotspotter to monitor people, smartphones and vehicles. But ClearWorld’s “Follow Me” light poles take the prize for the most ignominious Orwellian light poles I have had the displeasure of reporting about.