Ever try and get someone’s attention because they forgot to pull up their fly? Perhaps you have tried to use hand signals or made eye contact with them in a discreet attempt to get them to zip up their fly.

Well, America’s police have figured out a way to make sure a person will never forget to pull up their zipper.

As the video below explains, police are being taught to ‘start shooting a suspect low on the pelvic girdle and work their way up to the face or on the brain housing group’ like a zipper.

The instructor’s use of words, “pelvic girdle and brain housing” are designed to make it easier for cops to justify using their weapons like a zipper on human beings.

Police zippering citizens in the brain housing gives new meaning to an old Korean War term, “zipper heads” that was used to describe American troops running over Asians with a jeep.

“The soldiers claimed that the tire tracks from the jeeps left a pattern resembling that of a closed zipper along the corpse.” (To find out how American soldiers referred to Japanese as zipper heads click here.)

This past December, The Appeal, revealed that in California, the Vallejo Police Department’s officers have been “zipper killing” people for a decade.

The newly released records also show that Vallejo police supervisors who reviewed fatal and non-fatal shootings for potential policy violations and training purposes praised officers for using a zipper drill method of firing. An officer using this method fires numerous rounds into an adversary, starting low in the target’s body and zipping the barrel of the gun up toward the person’s head while continuously shooting.

In what version of America is this not horrifying: Pre-9/11 or post-9/11? And why have only three police “zipper killings” been criticized? 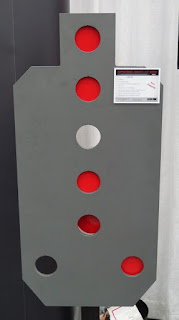 Credit: the truth about guns

According to the Appeal, police supervisors have only criticized three officers for not “zipper killing” suspects.

From 2010 through 2018, only three officers’ firearms tactics were criticized by supervisors. One of the officers was criticized for not using a method, taught by the department, that involves firing more shots at a murder suspect. Another shot at a suspect while police and passing motorists were in his line of fire. The third shot a rifle over the heads of other officers to kill an armed man.

Being criticized for not shooting a suspect numerous times? What has happened to American policing?

Supervisors commended a police officer for continuously firing at an unarmed suspect until he died from being zippered to death!

Sgt. Joe Iacono, who reviewed Kenney’s shooting of Barrett, determined that Kenney was entirely within department policy when he killed the unarmed man. Iacono wrote that Kenney used a pattern of fire consistent with how the department trains its officers to shoot. He did not simply use two rounds and reevaluate as was taught in the past, Iacono wrote. Instead, Kenney continuously fired into the unarmed man’s legs, arms, and body until he collapsed and stopped moving.

Another supervisor wants the FBI to teach every police officer to “zipper kill” Americans.

Sgt. Kent Tribble wrote in a report about the incident that the department’s firearms instructors should step away from the outdated FBI failure drill (two to the body, one to the head), and instead have firearms instructors all teach the more industry standard Zipper drill.

Why isn’t this headline news? Have police killings of Americans become so commonplace that zipper killings are viewed with indifference by the mass media?

For anyone out there who still clings to the idea that America’s police are not militarized: please, please try and explain why cops have been “zipper killing” Americans for ten years.

Be the first to comment on "“Zipper Killing” Americans: The Police Tactic Of Killing People In A Hail Of Gunfire"