The attack on a Saudi Arabia oil facility, now being blamed on Iran, which caused crude oil futures to spike more than 10% to start the week is likely going to start hitting consumers at the pump over the next couple of days, according to Bloomberg.

Despite retail gasoline futures jumping as much as 20 cents on the New York Mercantile Exchange early in the week, the average US retail gasoline gallon rose just 1 cent since Sunday. But the impact of futures rising will become more pronounced over the next day or two, according to Patrick DeHaan, senior petroleum analyst at GasBuddy.

The shift in prices at the pump will come after gasoline distributors adjust their prices to match gains in futures and regional spot markets, he says.

An increase of about 15 cents to 30 cents per gallon in the United States is going to be likely over the next several days while Saudi Arabia works to get production back up to speed.

Despite the huge move higher at the beginning of the week, where crude futures ran through the $63 mark, they have since pared gains and are trading at around $59 late in the day on Tuesday – still about 10% higher than prior to the weekend. 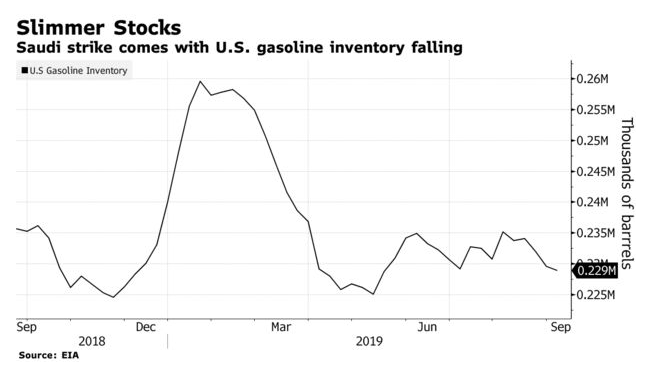 President Trump also said on Tuesday that it wasn’t going to be necessary to release oil from the Nation’s Strategic Reserves:

“I don’t think we need to. Oil has not gone up very much,” Trump told reporters Tuesday aboard Air Force One as he traveled to California for a series of fundraisers. “There’s a lot of oil in the world.”

As Trump is likely well aware, any type of prolonged increase in gas prices could keep low- and middle-income voters from the polls during election time, according to Kevin Book, managing director of ClearView Energy Partners in Washington.

No voter has ever been happy about a price increase. They might not vote for the other party, but they might not get off the couch if they are pissed off.

The potential for rising gas prices comes at a time during the year when winter grade gasoline, which is cheaper to make, usually sends prices lower. AAA had predicted $2 dollar gasoline in the US South this fall, where it is generally cheapest in the nation.

DeHaan concluded: “Right now you are seeing the stations rushing to get those tanks full. And those who are not able to fill up will be confronted with having to pay extra later.”