Gun paranoia remains at ridiculous levels in US schools. This case is disturbing not only for the gun hysteria, but for the social media spying aspect.

A middle school student in Trenton, Ohio, narrowly dodged a lengthy suspension and possible expulsion from school because he did something people do every day: he “liked” a photo on Instagram.

Zachary Bowlin, a seventh grader at Edgewood Middle School, was slapped with a 10-day suspension after the school somehow found out the boy liked this photo of an airsoft gun on the social media platform: 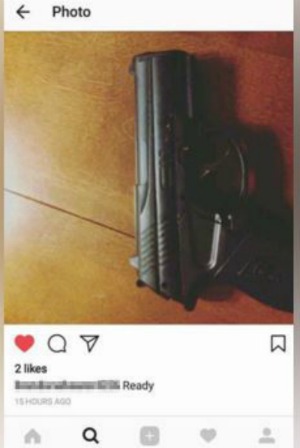 “I liked it, scrolling down Instagram at night about 7, 8 o’clock I liked it,” Zachary said.

“I don’t think I did anything wrong. [The] next morning, they called me down and, like, patted me down and checked me for weapons. Then, they told me I was getting expelled or suspended or whatever,” he told NBC4.

Marty Bowlin, Zachary’s father, said, “I was livid, I mean, I’m sitting here thinking ‘you just suspended him for ten days for liking a picture of a gun on a social media site. He never shared, he never commented, he never made a threatening post… anything on the site, just liked it.”

“My wife called and said he’d been pulled in to the office, and he was being suspended because he liked a picture on Instagram that his friend posted .. of a weapon, of an airsoft gun,” Mr. Bowlin told WLWT5. “It was 10 days suspension with the possibility of expulsion. I’m like, ‘For liking a gun? Did he make a comment or threat or anything?’ And it’s like, ‘No. He just liked a picture.’ I’m like, ‘Well, this can’t happen.’”

Mr. Bowlin said his son’s decision to like the photo of the gun, which included the caption “Ready,” was harmless.

“The young man that posted it and my son, and probably four or five other kids, play airsoft in our field,” he explained. “So I pretty much knew what it was about. So I really wasn’t concerned.”

“I mean, I figured he’d cleaned his gun and was ready, wanting to play and stuff,” Zachary added.

On Friday, the school sent an email to parents that said:

Yesterday evening school officials were made aware to an alleged threat of a student bringing a gun to school. We act on any potential threat to student safety swiftly and with the utmost importance. This morning, the alleged threat was addressed and we can assure you that all students at Edgewood Middle School are safe and school will continue as normal. Thank you

Can you imagine how alarmed parents felt – understandably – after receiving such an email?

It reads as if a student actually said they were planning to bring a real gun to school to shoot the place up.

When you’re dealing with school districts nowadays and there are pictures of guns, regardless of the kind of gun it is, it’s a gun. And there are certain images or words, I can’t determine if that’s playful or real. And until I can get to an investigation, I have to look into it, those students have to be removed.

I’m here for all students. And at the end of the day, and I’ve said it time and time again, parents will forgive us for certain things. They’re not going to forgive us if their kid doesn’t come home. They’re just not. And it’s difficult to even think about it, but it happened 10 minutes up the street almost.

I cannot just turn my head and act as if, well, I think it may have been playful and take the chance that something happens. I can’t take a chance.

Some of the students were so uncomfortable with the Instagram photo that they stayed home from school, Fussnecker said. How the school found out about the photo has not been revealed, but it seems likely that some of the students who were afraid reported it.

Fussnecker met with the Bowlins on Friday afternoon, the suspension was revoked, and the boy was allowed to return to school today without penalty.

“He was a very reasonable man, and they seemed to see it our way,” Mr. Bowlin said.

The student who posted the photo remains on suspension, and his family is reportedly meeting with school officials this week.