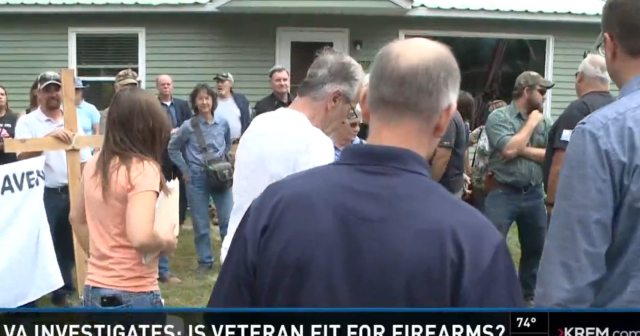 Idaho residents gathered outside Veteran John Arnold’s home in Priest River on Thursday to protest the U.S. Department of Veterans Affairs decision to threaten seizure of Arnold’s firearms after labeling him “financially incompetent.”

Arnold claims that an error on paper work he filed with the VA shortly after having a stroke one year ago is the reason he received the label.

“If somebody else makes an error and they cause you grief they should fix it,” Arnold told KREM 2. “That’s all I want is that stuff to get fixed.”

Roughly 100 people gathered outside Arnold’s house on Thursday to show support for the veteran’s right to bear arms.

A VA inspector was set to visit Arnold Thursday but likely flaked due to the protest.

“I took an oath to uphold the U.S. Constitution and uphold the laws of Idaho,” Sheriff Wheeler said. “This seemed appropriate to show my support. I was going to make sure Mr. Arnold’s rights weren’t going to be breached.”

“It’s absolutely amazing and it gives you a new found hope that there are still people out there ready to defend our constitution,” Idaho resident Maria Bosworth said at the protest.

It was on July 30 Arnold received a letter from the Veterans Benefits Administration which stated his firearms could be taken away because he had been labeled “financially incompetent.” 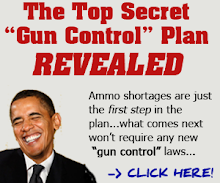 According to KREM 2 a field officer with Bonner County Veteran Services made an appearance at the gathering at Arnold’s home Thursday afternoon to announce to the crowd that the VA inspector would not be coming to Arnold’s house that day. The Veteran Service officer also said Arnold may appeal the paperwork stating he was incompetent to handle his finances.

Arnold plans to work with that officer in order to fix the error.

A serious push is underway to strip the Second Amendment rights of Americans. Just last month the LA Times reported that the Obama administration was keen on pushing gun background checks on Social Security recipients. This raised concerns that those receiving benefits, but are unwilling or unable to manage their finances, could be stripped of the right of possessing firearms.