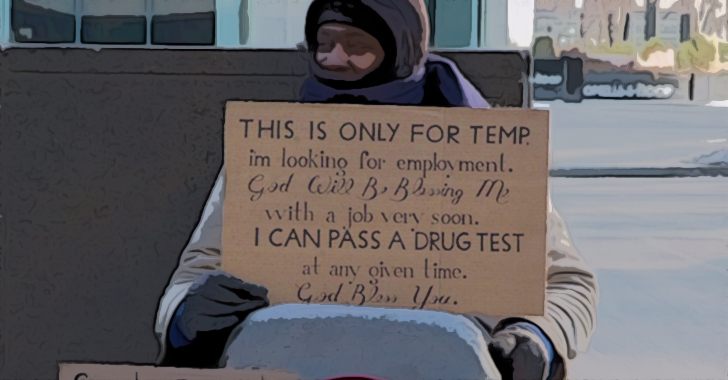 In our busy, modern world, it isn’t uncommon for even those with the best intentions to walk by another who is less fortunate and find themselves unwilling or unable to assist them. It is not so much a sign of ill will as much as it is a symptom of widespread apathy. It is an apathy so common that we, as a society, allow local lawmakers to pass anti-homeless bills that prohibit people from giving food or change to the homeless. While this indifference has its own dose of disdain for the less fortunate, there are still people working to help brothers and sisters in need.

We’ve all seen a homeless man or woman holding a cardboard sign with black lettering asking for food or change. About 99% percent of the time, the signs are small and simple. However, a Chicago art student has been working to change that. Ian Todd moved from California to Chicago to attend Chicago Portfolio School, which specializes in design and advertisement. After arriving, Todd didn’t react to homeless people with the same apathy many of us do. Instead, he decided to take a different kind of action.

Todd began exploring areas of Chicago in April, 2015, offering to put his skills in design to good use by revamping cardboard signs for the homeless. Soon after, a series of well-designed cardboard signs began appearing on the streets of Chicago. Todd later dubbed this “The Urban Type Experiment” and began documenting his signs and the stories of the people he’s helped on his blog.

But did it work?

According to the several success stories that Todd has shared on his blog—yes—the signs have helped. Todd was able to track down most of the people he had made signs for to inquire about their effectiveness. Most all of them noted that more people began stopping to look at the signs and that they drew attention, compliments, and assistance getting food, water, or a place to sleep for the night. Unfortunately, about a month ago, Todd reported that he was moving out of Chicago, stating the project would come to a halt. Whether or not it will be continued in another city is unclear.

What makes this so important that it should be mentioned? To begin with, the simple fact that an individual has taken such an innovative approach to helping the homeless is worthy of recognition in itself. It is especially noteworthy considering that in addition to making people signs, Todd also says he gave money to these people for being a part of the project.

Additionally, Chicago also has seen a massive increase in its homeless population. According to statistics gathered in 2014, the Chicago Coalition for the Homeless estimated that 138,575 citizens in Chicago were homeless. Of that number, 22,144 were children, according to Child Protective Services (CPS). Any sort of action to get these people off of the cold streets of Chicago and into warm homes with full bellies, like so many of us enjoy, is commendable.

Criminalizing homelessness will not make the less fortunate disappear. Nor will turning a blind eye and staying locked up in our bubbles. Progress requires progressive action, not poorly developed quick-fixes that install spikes into the ground to stop people from sleeping under an awning, blasting loud noises into public parks in the middle of the night to prevent people from falling asleep, or criminalizing people who try to help with laws that ban feeding and assisting the homeless. One would think that by 2015, we would have recognized these “solutions” for what they are: absurd, despicable, and degrading to humanity. After all, despite the “homeless” component “homeless person,” they are people nonetheless—all capable of feeling joy, sadness, love, loneliness, and everything else a person lucky enough to have a roof over their head can feel.