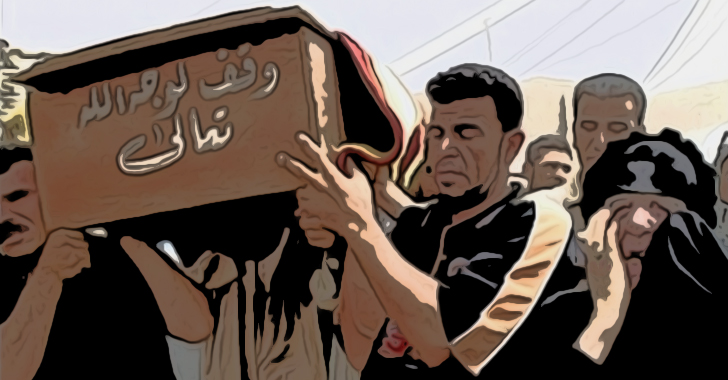 A report released by the United Nations on Monday reveals a sobering reality of the ongoing war in Iraq: civilians are being targeted en masse. The data shows that the Iraqi conflict has resulted in at least 15,000 civilian deaths and 30,000 injuries since January 2014.

The Report on the Protection of Civilians in the Armed Conflict in Iraq was compiled by the U.N. Assistance Mission for Iraq (UNAMI) and the Office of the High Commissioner for Human Rights (OHCHR). The report specifically examines the time period between December 11, 2014 to April 30, 2015, where 3,345 persons were killed and another 7,423 were wounded. Baghdad suffered the heaviest losses in the roughly five month period, recording at least 1,586 killed and 4,138 wounded.

Those fortunate enough to evade death or injury have been subject to mass human rights violations as well as displacement. A total of 2,834,676 persons have been displaced within Iraq—including an estimated 1.3 million children—between January 2014 and April 2015.

“Civilians continue to be the primary victims of the ongoing armed conflict in Iraq – and are being subjected to human rights violations and abuses on a daily basis,” said Zeid Ra’ad Al Hussein, the United Nations High Commissioner for Human Rights.

The findings also determined that

Those who have managed to reach areas of safety consistently reported lack of basic necessities, such as food and sanitary items, and alleged that they were subjected to forced labour, forced religious conversions, ill-treatment, murder, and physical and sexual violence including sexual slavery and the trafficking of women and children.

Accusations of war crimes, crimes against humanity, and possible genocide are also being levied against the Islamic State of Iraq and the Levant (ISIL). Still, according to the report, “In a number of cases, it has been impossible to identify the perpetrators of violations and abuses committed during the reporting period.”

The reported numbers only account for casualties the U.N. was able to verify and recognizes that the actual count may be much larger.