History shows us that all fiat money (just paper, or base-metal coins; no precious metal ‘backing’) always fails by losing its purchasing power, usually due to excess creation of new money; this is called ‘monetary inflation’ (which leads to ‘price inflation’ because the currency becomes worth less).

We saw it recently in the hyperinflation in Zimbabwe. Germany did it in 1919, and France in 1716 and 1793, and there are many others. Now the Euro currency is failing due to excess spending and borrowing of many European Union (EU) members, but especially Portugal, Italy, Ireland, Greece, and Spain (the PIIGS!). Governments and bankers love fiat money and central banks because they can spend and bail themselves out with new money or loans, rather than use unpopular taxes or suffer defaults.

Since the USA cut all ties to gold in 1971, all nations have ‘gone fiat’ (‘floating’ exchange rates) and borrowed and spent to excess.

The endless supply of money funds the welfare-warfare state (wars are expensive) and creates a ‘moral hazard’ (perverse incentive) for greedy bankers and Wall Street firms to take excessive risks (including 40 to 1 leverage, rather that 5 or 10 to 1) because they know they will be ‘bailed out’.

All of the above have combined to fund:

1. Excessive government spending for ‘social services’, wars, and other projects.

This has gone on since the Euro currency started in 1999, and crashed along with the US (they are interlinked) in 2009. Now the finance ministers are worried that the Euro bank and currency will fail, and are grasping for ‘more government’ solutions to fix it. They are short of money for bailouts, so ‘Fiscal Integration’ is the new favorite (and last resort?), where spending for each nation is controlled by the central EU authorities, at a great loss of sovereignty!

The 17 finance ministers of the countries that use the euro are converging on EU headquarters today in a desperate bid to save their currency, and to protect Europe, the United States, Asia and the rest of the global economy from a debt-induced financial tsunami. The ministers were discussing ideas that would have been taboo only recently, before things got as bad as they are, such as: 1. Countries ceding fiscal sovereignty to a central authority, and/or 2. Some kind of elite group of euro nations that would guarantee one another’s loans, but require strong fiscal discipline from anyone wanting membership.

To make matters more tense, the U.K. Financial Services authority has advised banks to make contingency plans related to the major withdrawals and transfers that would occur if the Euro fails.

Unfortunately, the careers (and social status) of the government and academic folks who run the monetary systems of the world (central banks, Treasury staff, IMF, etc.) are all aligned with government-controlled fiat systems. This gives them the power, hubris, and the endless supply of money they love. None of these sage leaders are considering adoption of the ‘Classical Gold Standard’, but they should because this system has always produced more peace and prosperity whenever it is used (no fair comparing to distorted versions such as the ‘gold exchange standard’, etc.).  In this system, gold is money, and is used in coins (small denominations have small discs in the center), and paper notes or base-metal tokens are just receipts that can be redeemed for their face value in weight of gold. Since money cannot be made ‘out of thin air’, spending is reduced.

With no support from the elite, it is up to me to offer a gold plan as shown below. It could be invoked with no risk to current Euro owners because all existing Euro currency would immediately be backed by gold, so there would be no ‘run’ to dump them.

Principles and ideas which guided creation of the Three-Step Plan

1. Money is a product of the people and market, and should not be a government monopoly (99% abuse it). 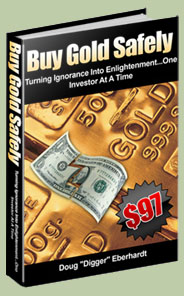 2. Money should be made of a commodity with certain characteristics. Gold is preferred by the market (money users). In a transaction, the gold money has market value equal to the goods or services being bought or sold (a medium of exchange, store of value, and unit of account). ‘Representative’ paper or metal tokens (which are not ‘money’) would be redeemable in gold by the issuing mint, to bearer on demand.

3. Money is not ‘backed by’ or ‘based on’ gold; The gold is money, and valued by weight, whether in a coin or held on reserve for redemption of paper notes or base-metal tokens. Prices and payments will be in weight of gold (grams, milligrams, etc.). There would be no ‘names’ such as Euro’ or ‘Dollar’, just marked by the weight of gold they contain or represent.

4. Nations that overspend will simply run out of money (an automatic regulator); inflexible, but less fragile and corrupt. This means fewer and smaller wars and business cycles! Imprudent banks that lend to nations led by self-serving, corrupt politicians will have losses by defaults, and get no bailouts using fake paper money. There would be no need for a ‘reserve currency’ to substitute some nation’s ‘strong’ currency for gold.

5. If any nation or region’s economy (GDP) grows faster than its gold supply, demand will increase and the domestic value of gold will appreciate (more purchasing power per gram of gold; basic Economics 101 supply and demand).  Thus, there is always the ‘right amount’ of money, in the form of purchasing power (which is what really matters!). Since new mining only adds about 1.6% more gold to the world supply each year, the changes causing depreciation (less purchasing power per gram) will be small worldwide, and international money value will tend to be stable or gently upward.

Summary of the ‘Redick Three-Step Plan’ to Save the Euro

Step 1:  As a transition from existing Euro currency, all of government-owned gold of member countries (including half of the current open-market ‘gold value’ of holdings of non-Euro cash and bonds of other nations) would be pooled at the European Central Bank (ECB) and held for redeeming the existing Euros (yes, some countries have more ‘per person’ or ‘per euro held’, but this is one of the pains of transition; the worse pain is failure and complete loss!). The above ‘half of ’ requirement is designed to extract a fair share of value from member nations that have only a small percent of their financial assets in gold. The total value of Euro-denominated cash and bonds (similar to our M3) would be divided into the gold reserve to determine ‘gold weight per Euro’. Existing Euros would be valued thereafter by ‘weight of gold’ (the ‘market price’ of gold would not be involved). There would no longer be a ‘Euro price’ of gold. The new money would only have a face value in weight of gold. Legal tender laws would be ended, and private mints allowed. The ECB would have no role, and would be abolished as counterproductive, with its gold sold to private mints by redemption of old Euros (as holders of old Euros trade them in at mints).  No new Euro notes, coins, or credits would be issued, and no bonds, or loans made, after the conversion date.  It would also be required that existing notes be converted (traded-in) to ‘new money’ within three years after the conversion started.

Step 2: The EU government and ECB will have zero control (no mint licenses, reserve minimums, etc.), and no other role except inspections for fraud (false gold reserve claims, etc.), which could also be done by private firms. Customer choice and demand will rule!

Step 3: The EU plans for conversion would be public so other nations could prepare. No international conferences would be involved (to avoid delays, and dilution of terms). On the day of conversion, all Euros would be redeemable in gold, so there would be no ‘run’ to dump them. I predict that all nations will soon convert to gold, because sellers will not accept their trash fiat paper! As this occurs, foreign exchange (and currency manipulation by nations, G20, IMF, World Bank, BIS, etc.) will fade because all major currencies will be valued by weight and fineness of gold, and each international transaction will be ‘in balance’ when it occurs; no ‘settling of imbalances’ between nations will be needed.

Based on lessons from history, the EU members will enjoy more peace and prosperity once they adopt a sound monetary system. A stable currency value, and an economy free of government intervention, allows business managers to plan and grow better, and gives incentive for all citizens to save, which provides capital for future investments.

If any member nation refuses to comply with the conversion to gold as money, they will be required to resign from the EU, and create their own currency. If they are smart, and want to avoid further decline and losses, they will follow a plan similar to the one suggested here. So should the USA!

Related Articles by David Redick:
Why Use Gold as Money?
How to Abolish the Fed and Convert Gold to Money
The Impact of Fiat Money as the World’s Reserve Currency
The Phases of an Empire
The Cost of Building and Operating Empire-USA