Des Moines, IA — For years now, the Free Thought Project has been reporting on and participating in the act of filming the police. Many of these folks don’t just film arrests and police stops, but they take to filming police departments to see how they react to legal behavior. These folks take to public spaces and legally begin filming to see what the police response will be. The practice of legally filming public spaces to report on the police response is known as a “First Amendment Audit.”

While TFTP has reported on multiple instances in which good cops actually uphold their oaths to the Constitution and protect the citizens’ right to film in public, the majority of them react by showing their ignorance of the law.

As the co-founder of TFTP, Jason Bassler pointed out years ago,

More often than not the officers demonstrate they are more concerned with intimidation, dominance and subservience than knowing or upholding the law. Because many of them react so poorly while highlighting the lack of understanding they have for their job, the videos go mega viral garnering millions of views. The virility in turn creates incentive for more people to pick up the camera and “audit” police in their city and in the slightest way helps push back against the ever-increasing police state.

One particularly egregious case of police failing to uphold their oaths to the Constitution came out of Des Moines, Iowa, and was shared with TFTP in 2019. Now, 3 years later, it is finally getting settled as the taxpayers of Des Moines get held responsible for the actions of several bullies with badges.

Daniel Robbins – the gentleman in the video – had committed no crime, was polite, and was acting entirely within the constraints of the Constitution, yet he was bullied, detained, harassed, his rights violated, and had his equipment stolen.

The taxpayers of Des Moines are now being forced to pay $125,000 for the actions of their officers.

Adding to the disgusting nature of this rights’ violation, when Robbins originally attempted to seek civil action against the department for their most shameful treatment of this innocent man, a judge sided with the cops. The judge claimed that Robbins’ completely legal activity — protected by the Constitution of the United States — was probable cause for cops to detain him, harass him, and confiscate his equipment.

Not only were the cops completely ignorant of the Constitution they swore an oath to uphold, but the judge appears to be equally incompetent. The court has changed it tune, however, and as the case was set to go to court next week, the city settled. 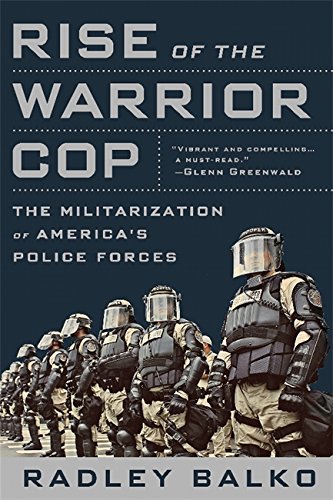 Rise of the Warrior Cop by Radley Balko

“The city won this case at the district court level, which was ultimately reversed by a panel of Eighth Circuit judges,” City Manager Scott Sanders said in a statement. “While the city disagrees with the panel’s determination, it also respects the judicial process and decided to settle the case and move forward.”

As the video below illustrates, Robbins had done nothing wrong, was harming no one, and was merely practicing his First Amendment right to film in public when he was approached by a tyrant cop who was hell-bent on violating Robbins’ rights. Perhaps this rights’ violation was due to the fact that Robbins was documenting an officer’s illegal behavior.

According to Robbins, he “was surrounded, detained and threatened with arrest” on May 10, 2018 when he recorded a Des Moines Police Department employee illegally parked in front of a “no parking” sign outside the police station.

According to the lawsuit, Robbins, a radio producer and journalist, was standing on East Second Street when he saw a police employee leave the police station, get into an illegally parked vehicle and drive away. Robbins began recording what he saw on his phone.

Youngblut immediately demanded to know why Robbins was filming. Robbins, well within his rights, asks if he’s doing anything illegal.

“Oh, you’re one of those guys, aren’t you?” Youngblut tells Robbins.

Youngblut then replies with one of the most oft-repeated phrases from those who want to see First Amendment Auditors arrested.

“What if I came to your house and started filming?” Youngblut asks, creating a false equivalency and ignoring all logic.

“Do you live here?” Robbins asks in return. “You can come to my business anytime and stand on a public sidewalk and film.”

This application of logic appeared to infuriate Youngblut who then called out his fellow bullies in blue to further harass and intimidate Robbins.

The entire time, Robbins is polite and compliant, asking if there is anything that he can do to ease the officers’ suspicions. However, these officers couldn’t have cared less about having their alleged suspicions lowered. They were set on making sure this well-informed citizen was punished for knowing and asserting his rights.

Robbins was subsequently surrounded by cops, detained, and had his equipment unlawfully confiscated — acts which the cops and the court considered entirely lawful.

But it was not.

As you watch the video below, and the shameful failure of the police to uphold their oaths to the Constitution, remember that this is why First Amendment Audits are not only increasing in frequency but are entirely necessary.

Be the first to comment on "Watch As Cops Attack Man For Filming Them Break The Law, Steal His Camera — Taxpayers Held Liable"