Those of us old enough to remember could probably name at least a handful of health conditions once considered to be purely psychological but were eventually recognized as medical.  Ladies, remember when PMS was said to be “all in your head?”

Decades of research has already determined that exposure to Electromagnetic Fields (EMF) including non-ionizing radiation (aka “wireless radiation”) is biologically harmful.  When people experience symptoms and illnesses after being exposed to it, this is often referred to as Microwave Sickness, Radiation Sickness, Electromagnetic Sensitivity (ES) and/or Electromagnetic Hypersensivity (EHS).  In the U.S., ES is recognized as a federally recognized disability and the Biden administration is providing financial compensation to victims of “Havana Syndrome” which experts have been claiming for years is likely being caused by exposure to electromagnetic and/or microwave energy (see 1, 2, 3, 4, 5, 6).  Many still seem to be unaware of this including the writer of an article recently published in Psychology Today. D’oh!

Tin Foil Hats: Tired Trope or Sign of the Times?

Although the “tin foil hat” has long been used as a trope to caricature conspiracy theorists and other paranoid individuals intent on protecting themselves from invisible attacks ranging from electromagnetic energy waves to telepathic mind control, it’s something I’ve seen in my real-life clinical practice as a psychiatrist on more than one occasion.

For example, one particularly memorable patient with schizophrenia crafted a helmet out of aluminum foil based on the belief that he could block the energy waves that he believed were being beamed into his head by government satellites and causing him to hear voices. Another woman suffering from methamphetamine-induced psychosis fashioned a skirt out of a Mylar blanket because she was convinced that the pain she felt in her legs wasn’t caused by diabetic neuropathy as her doctors had told her, but by microwave radiation coming from the basement of the hospital.

The first description of using a metal foil hat to protect against telepathy has been attributed to Julian Huxley’s 1926 science fiction story The Tissue-Culture King. But needless to say, tin foil hats aren’t effective at treating paranoia in real life. In fact, if we’re to believe students at MIT who tested the ability of three different aluminum foil hats designed to block radio waves ranging from 10 kHz to 3 GHz in a 2005 tongue-in-cheek study, they aren’t particularly effective at blocking radio waves either: In the experiment, aluminum foil hats amplified radiofrequency bands in the 1.2-1.4 GHz range that are used for geolocation (e.g., “GPS”) and satellite communication.1 Science fiction aside, then, there’s no evidence that wearing hats made from tin, aluminum, Mylar, or anything else is very useful against unseen “energy attacks.”

And yet, in an era in which encouraging people to wear masks to prevent infection by invisible viral particles has proven to be an uphill battle, perhaps we shouldn’t dismiss or ridicule the premise of wearing tin-foil hats so quickly.2 After all, there are legitimate health concerns associated with exposure to electromagnetic fields (EMF), with the most evidence-based health risks coming from ionizing radiation in the form of UV light, X-rays, and Gamma rays, which are known to cause cancer. The effects of non-ionizing radiation emitted from power lines and household appliances like microwaves, computers, and cellphones are much less clear, however. The National Institute of Environmental Health Sciences states that such “low to mid-frequency radiation is generally perceived as harmless due to its lack of potency.” The University of North Carolina Office of Institutional Integrity and Risk Management likewise notes that “it is the general consensus of the majority of the scientific community that scientific studies, to date, have suggested that the existence of harmful effects from environmental levels of [EMF] exposure has not been substantiated but remains a possibility.” Finally, the World Health Organization (WHO) concludes:

In the area of biological effects and medical applications of non-ionizing radiation approximately 25,000 articles have been published over the past 30 years. Despite the feeling of some people that more research needs to be done, scientific knowledge in this area is now more extensive than for most chemicals. Based on a recent in-depth review of the scientific literature, the WHO concluded that current evidence does not confirm the existence of any health consequences from exposure to low-level electromagnetic fields.

Despite the lack of evidence to support health problems related to non-ionizing radiation, public concerns about EMF are commonplace and run the gamut from reasonable reservations and calls for more clinical research about the possible dangers of cellphone usage in children to more seemingly delusional beliefs about ongoing microwave attacks (like “Havana Syndrome“) and “gang-stalking.” Some people, epitomized in the character Chuck McGill from the TV series Better Call Saul, believe that they suffer from a medically-disputed syndrome called “electromagnetic hypersensitivity” (EHS) that renders them particularly vulnerable to developing nonspecific symptoms like fatigue, dizziness, insomnia, headaches, and tingling sensations caused by either errant or directed EMF exposure.3 The WHO has summarized research to date on EHS—also called “idiopathic environmental intolerance attributed to electromagnetic fields” (IEI-EMF)—as follows:

Nonetheless, with some insisting that they’re “allergic to WiFi,” an entire industry has emerged to capitalize on such fears. For example, a quick internet search reveals that for $60, you can buy an “EMF-proof beanie” with “WaveStopper™ technology” that claims to block 99 percent of wireless radiation. For $50, you can get a “Faraday hood” with “anti-radiation silver fabric” that alleges to “shield 5G, 4G, cellular, WiFi, Bluetooth, and smart meters.” And the options hardly stop there. There are also baseball caps, pendants, bracelets, all manner of other jewelry, and even a $1,000 canopy bed, all purporting to safeguard individuals against EMF.

Taking things well beyond the realm of rational health concerns about EMF, a company markets a small electronic device called a “QuWave Personal Defender” for $325 that claims to “produce a protective field that interferes with external and internal negative harmful signals” by emitting “frequencies that convert electronic and psychic attacks to positive energy and strengthen the human bio-field.” The top-of-the-line tabletop model retails for nearly $550. As online reviews for these products suggest, many seem to be marketed to those who believe themselves to be “Targeted Individuals” of gang-stalking. For example, one review of the Personal Defender says: 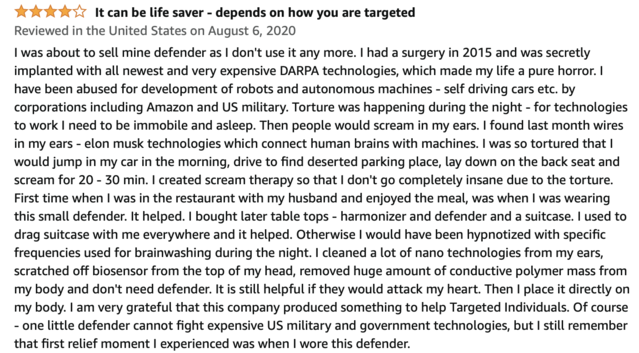 Whether stylish clothing items or electronic devices, these products are effectively pricey, modern-day tin foil hats designed to appeal to or exploit a consumer base besieged by so-called “modern health worries” about the likes of new technology, government surveillance, and gang-stalking that includes those who are merely mistrustful and vulnerable to misinformation as well as those who embrace conspiracy theories and are truly paranoid.4,5 That others can successfully profit from these consumers is a sign of the times.

Ironically, although so-called “Targeted Individuals” and those who believe they suffer from EHS are often convinced that they’re being harassed by government agents or zapped by invisible energy waves, it’s really the manufacturers of these modern-day tin foil hats that are targeting them. And, just like the MIT experiments that demonstrated that tin foil hats could sometimes amplify EMF suggest, buying into the modern-day tin foil hat market is less likely to help and more likely to ramp up one’s irrational fears while feeding a growing consumer market in the process. Most of those consumers would probably find more relief by unplugging from their cellphones—and the scams they find on the internet—than spending their money on tin foil hats.

Joseph M. Pierre, M.D. is a Health Sciences Clinical Professor in the Department of Psychiatry and Biobehavioral Sciences, David Geffen School of Medicine at UCLA and the Acting Chief of Mental Health Community Care Systems at the VA Greater Los Angeles Healthcare System. His work focuses on the treatment of individuals with severe mental disorders, including schizophrenia, bipolar disorder, major depression, and co-occurring substance use disorders. Although his clinical practice centers on the care of hospitalized patients who suffer from psychotic disorders, he has a longstanding interest in the grey area between psychopathology and normality and the psychological underpinnings of everyday life. Psych Unseen draws from the perspectives of psychiatry, neuroscience, psychology, and evidence-based medicine to address timely topics related to mental illness, human behavior, and how we come to hold popular and not-so-popular beliefs. In 2021, a federal court ruled in favor of organizations and petitioners that sued the Federal Communications Commission (FCC) for NOT adequately protecting Americans from wireless radiation exposure.  Non-profit groups also petitioned the U.S. Health and Human Services Department (HHS) and Food and Drug Administration (FDA) to declare wireless radiation an “imminent” health hazard and start warning the public.  So far – no dice.

As more American government workers report symptoms of “Havana Syndrome” and file lawsuits, the connection to EHS, ES, Microwave Sickness, and/or Radiation Sickness becomes more obvious at least to some credible scientists.  Unfortunately, the countless other Americans who are experiencing symptoms, illnesses, and injuries from exposure to cell towers (4G and 5G), utility “Smart” Meters, and other common wireless sources (cell phones, smart watches, smart thermostats, Wi-Fi routers, etc.) continue to be mostly disregarded and/or marginalized even by the government agencies and health organizations that are supposed to protect them (see 1, 2, 3, 4, 5, 6, 7, 8, 9, 10, 11, 12, 13, 14).  Of course, once upon a time, asbestos, lead paint and “Forever Chemicals” were also described by some of the same agencies and organizations as completely harmless too.  Meh.