For practicing their free speech, Canadians were persecuted and driven into financial ruin by the government who claims to protect them. This was all carried out with zero due process and without any democratic input at all.

Last week, pulling no punches, Deputy PM Chrystia Freeland announced that “…all crowdfunding platforms and the payment service providers they use must register with Fintrac, and they must report large and suspicious transactions to Fintrac.” This, she said, is a way to “mitigate the risk” of “illicit funds” and “increase the quality and quantity of intelligence received by Fintrac and make more information available to support investigations by law enforcement.”

When the American political class watched as the Canadian government began financially persecuting individuals for their freedom of speech, it was crickets from the mainstream. This was one of the most tyrannical moves in recent Western history and instead of standing against it, the establishment actually supported it.

In fact, a poll by Trafalger Group for Convention of the States recently found that a super-majority of Democrats, 65%, actually thought Trudeau’s authoritarian move to arrest people and confiscate their life savings — for practicing their freedom of speech — was a good thing.

Just 17% of the establishment left disapproved of it. 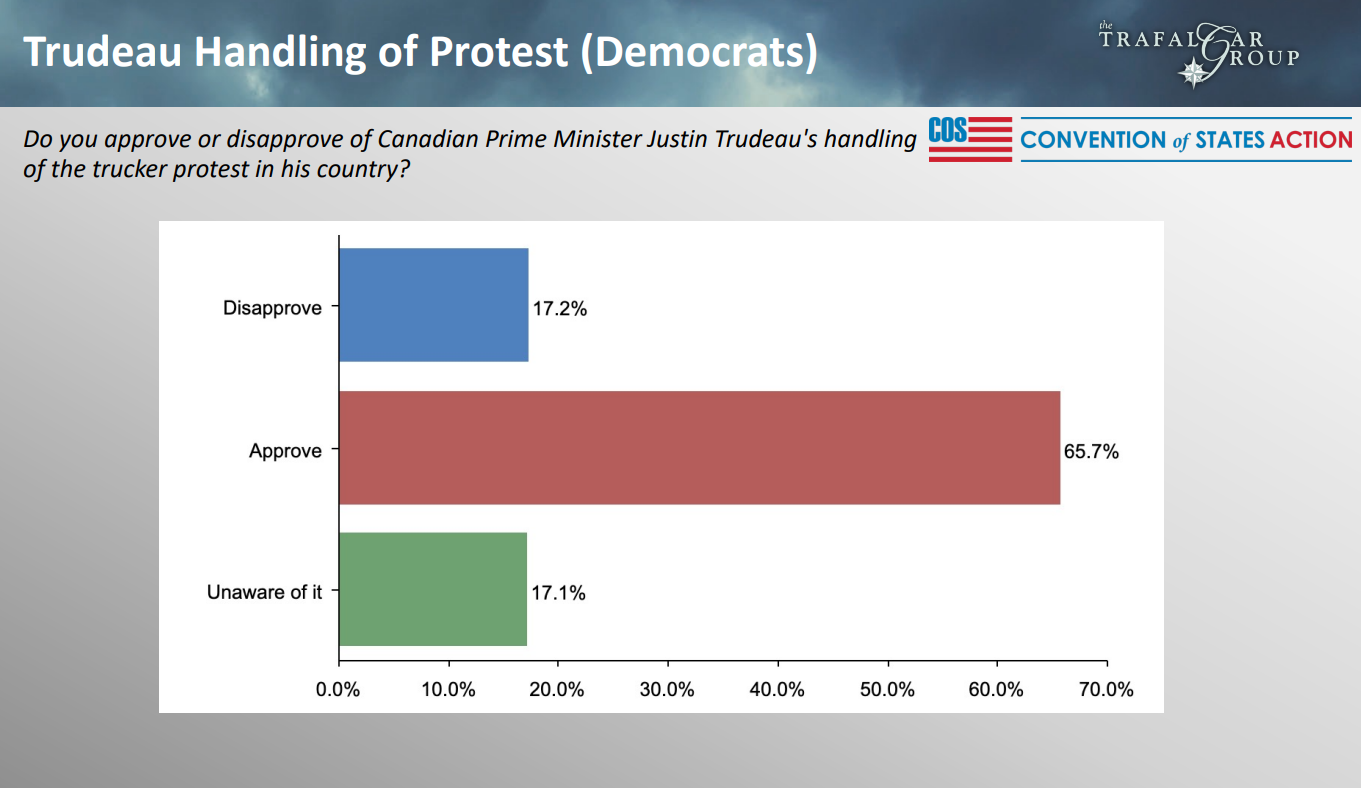 This insane authoritarian action was carried out with almost no resistance, and private banks in Canada proved they were more than willing to comply with the state’s demands.

Think about the ease with which this was done using the Canadian dollar and real money inside real banks; and then consider the implications had the Canadians already adopted the federated digital ID system with a digital asset controlled by the central bank and the state. Sounds like a conspiracy theory, doesn’t it? Unfortunately, it’s not and it will be here before you know it.

But don’t take my word for it, listen to Neil Parmenter, the President and CEO of the Canadian Bankers Association explain how this new system, supported by the World Economic Forum, will work. Plastic credit cards, ID cards, and cash are a thing of the past. Under the Great Reset, your entire financial portfolio will be controlled by the central bank and your assets relegated to a Central Bank Digital Currency (CBDC) that can be turned off in a split second by the tyrannical regime you dare to criticize.

“Canada’s banks are perfectly situated to help lead the creation of a federated digital ID system between government and the private sector.

We just witnessed Canada seize the assets of its citizens for peaceful protest, and now they are pushing a new system in which the state and central banks literally control everything. And it’s spreading — to America.

Earlier this month, Federal Reserve Board Governor Lael Brainard laid out plans for the United States to adopt a similar system.

“It is essential that policymakers, including the Federal Reserve, plan for the future of the payment system and consider the full range of possible options to bring forward the potential benefits of new technologies, while safeguarding stability,” Brainard said in remarks prepared for delivery to the U.S Monetary Policy Forum in New York. “A U.S. CBDC may be one potential way to ensure that people around the world who use the dollar can continue to rely on the strength and safety of U.S. currency to transact and conduct business in the digital financial system.”

Don’t let the rhetoric about competing in the digital currency age fool you. Bitcoin and other decentralized cryptocurrencies are a threat to the global banking cartel because they cannot control it. The anonymity and independence fostered by cryptocurrencies on the blockchain are enemies to the ruling class who seek to maintain control through centralization.

This is why China, last year, banned cryptocurrency trading and mining. It is a threat to their totalitarian grip over its citizens. It is also why they have ushered in the digital yuan. China has been working on their own digital currency since 2014 and the e-CNY is already being pushed on its citizens.

The e-CNY is completely controlled by the People’s Bank of China (PBOC), the country’s central bank, and the Chinese Communist Party, which exclusively leads the People’s Republic of China. Every single transaction conducted with the e-CNY is a matter of state record.

Given China’s Orwellian social credit system which punishes people for smoking, bad driving, shining a negative light on the CCP, and wasting money on “frivolous purchases,” the idea of the state controlling the whole of an individual’s assets is chilling. Yet this is exactly what has been unravelling in China for the last 8 years. And others are now following suit.

Their censorship arm, known as the Digital Forensic Research Lab, was suspected to have played a large role in the removal of hundreds of anti-establishment pages in 2018 and the years after.

The Atlantic Council is the group that NATO uses to whitewash wars and foster hatred toward Russia, which in turn allows them to continue to justify themselves. It’s funded by arms manufacturers like Raytheon, Lockheed Martin, and Boeing. It is also funded by billionaire oligarchs like Ukraine’s Victor Pinchuk and Saudi billionaire Bahaa Hariri.

The list goes on. The highly unethical HSBC group — who has been caught numerous times laundering money for cartels and terrorists — is listed as one of their top donors. They are also funded by the pharmaceutical industry, Google, the United States, the US Army, and the Air Force.

Remember when General Philip M. Breedlove, former head of the US European Command and supreme commander of NATO forces colluded with @AtlanticCouncil senior fellow Harlan Ullman to push for a war with Russian over Ukraine? I do.

This has been the plan.https://t.co/fH2GYO8ZBb

On their website, the Atlantic Council, advocates for central bank-controlled digital currencies, notes how 87 countries – which account for over 90% of the world’s gross domestic product – are exploring a digital currency, and five countries have already launched one.

One of the main reasons the Council and others advocate for such a centralization of power is to limit or prevent “illicit activity.” This is a prominent selling point from both the Atlantic Council and the equally dubious World Economic Forum.

In their White Paper Series on a Digital Currency Governance Consortium, the WEF outlines a plan for private entities, i.e. central banks, and the state to work together to prevent any activity the two deem “illicit” — like protesting forced vaccinations, for example.

An outspoken opponent of CBDCs is Maajid Nawaz, who recently appeared on the Joe Rogan podcast and laid out in shocking detail the implications for such a system, which as illustrated above is being pushed by all the world’s power players. In his example, he notes that the vaccine passport system is the gateway through which the digital currency will be pushed.

“Digital cash could be programmed to ensure it is only spent on essentials, or goods which an employer or Government deems to be sensible”

So the vaccine passport infrastructure is in place. But now we know that the vaccine doesn’t stop infection or transmission but the Checkpoint Charlie exists everywhere. They bring in digital banking, central banking, digital currencies. You’ve got a scenario now that you’re checking in and out everywhere you go, using vouchers that are programmed and you can only spend where you’re told you can spend them.

There’s another word for that. That’s called the Chinese social credit system. That’s what it’s called. And anyone who watches Black Mirror will know what I’m talking about.

So what they are telling us, and when I say they, who’s they, people in power, that’s the head of our economy, the Chancellor of the Exchequer, the second most powerful person other than the prime minister, and maybe the foreign secretary in the UK, right?

He’s telling us I just played it there for you. He’s telling us that’s what he, as the UK, the head of the G7 want to bring in for the G7. So a scenario where like in New York at the moment, because the passport infrastructure is in place, you bring in that digital currency, and you’ve got this total control. And if I’m speaking to you the way I’m speaking now, and my employer or government… deems me as saying or doing something inappropriate, suddenly, I can’t actually pay to come here and speak to you anymore. My digital currency won’t even pay for the ticket. Because it will be known that I’m coming to speak to you, ‘sorry, your vouchers don’t allow you to purchase that ticket to go and speak to Joe.’

This is a system that Hitler, Stalin, or Mao would have relished. Imagine a dictator having global transaction censorship across their empires and, at the touch of a button, they could silence their political enemies and propel them into financial ruin. That is what’s coming.

Over the last two years, politicians and bureaucrats have been exploiting the pandemic and preying on the fears of citizens to usher in systems like the vaccine passport. The groundwork has been laid and the elite — who actually call themselves this now — are ready to strike and they may use this current crisis in Ukraine to do so.

Will we stand up and say no, or will we roll over and allow the state to take complete control over our lives and surrender our voices and freedoms for a false assurance of security?

The way to stop them is via our Great Awakeningpic.twitter.com/ig4mSrkCm0