Many feel that Tencent is inadvertently leaking the “real” figures of those who have been killed and infected. On Jan. 26th, the website began to display there were much higher estimates of those killed and infected according to Hiroki Lo, a 38-year-old Taiwanese beverage store owner who took a screenshot of the website. Lo posted the purported “real” statistics to Facebook writing the following in Chinese.

Over the weekend on Feb. 1st, the Tencent web page showed another mix up of statistics listing confirmed cases of the Wuhan virus in China at 154,023, 10 times the official figure at the time. It also listed the number of suspected cases as 79,808, four times the official figure at the time, while the number of cured cases was only 269, well below the official number that day of 300. Further, the death toll listed was a shocking 24,589, vastly higher than the 300 officially listed that day. 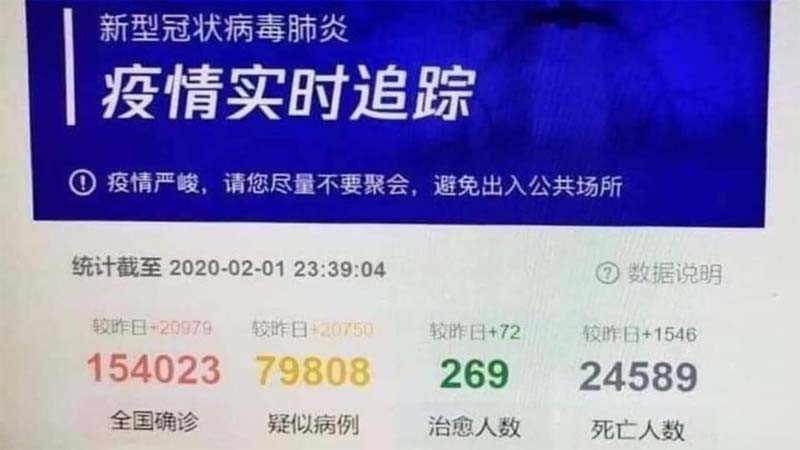 Since then, officially the death toll is now 630 people with the amount of infected at  31,000+ globally, according to the Johns Hopkins tracker of the coronavirus at the time of this report. Although, experts have disputed the numbers in China and worldwide, stating that more than 100,000 people could have been infected with the virus as of January 26th, the same date that Tencent may have screwed up publishing the “real” statistics, The Guardian reported.

Another claim by a Twitter user, who states in their bio they are a Taiwan-based political analyst, shared a screen grab which purported to show the death toll at 12,781 at around 8:30 pm on January 27th. The official death toll on the day was 80.

A crematorium worker in the epicenter of the coronavirus outbreak revealed the long working hours he and his colleagues are putting in to transfer bodies from hospitals and private homes, adding it’s up to 100 body bags a day. The bodies are collected from Wuhan’s three main hospitals plus other small hospitals, as well as private residences according to the whistleblower.

A team of public health experts led by Professor Neil Ferguson, stated they believed that the reproduction rate of spread was 2.5-3, meaning that each person infected would potentially transmit it to up to three others. This was when the official statistics said the amount of infected people was 2,000. That number then jumped up rapidly since.

“My best guess now is perhaps 100,000 cases right now,” Professor Neil Ferguson, a public health expert at Imperial College said at the time on January 26th. He added, “Although it could be between 30,000 and 200,000. “Almost certainly many tens of thousands of people are infected.”

Several medical doctors allegedly in China have said much of the same, as Activist Post reported previously, stating that China was covering up the real statics and that at least 100,000 had been infected with the new flu-like virus. Beyond that, China has now locked down 400 million people in its country in a total of 60 cities since an initial quarantine of 60 million people during the first few days the virus was being reported.

Guangzhou, the capital of China’s southwestern Guangdong Province and the country’s fifth largest city with nearly 15 million residents, has just joined the ranks of cities imposing a mandatory lockdown on all citizens, effectively trapping residents inside their homes, with only limited permission to venture into the outside world to buy essential supplies.

The decision means 3 provinces, 60 cities and 400 million people are now facing China’s most-strict level of lockdown as Beijing struggles to contain the coronavirus outbreak as the virus has already spread to more than 2 dozen countries.

That’s more than 400 million people forcibly locked inside their homes for 638 deaths? Just think about that: If there was ever a reason to believe that Beijing is lying about the numbers (and not just because Tencent accidentally leaked the real data), this is it.

Dr. Francis Boyle a professor of international law at the University of Illinois College of Law and the man who drafted the Biological Weapons Act of 1989, recently said in an explosive interview with Geopolitics and Empire that the coronavirus outbreak in Wuhan likely came from the BSL-4 lab in the city.

Boyle stated in the interview that he believes the virus is potentially lethal and an offensive biological warfare weapon or dual-use biowarfare weapons agent genetically modified with function properties. Boyle also touched on a fact this reporter stated previously — how Chinese biowarfare agents working at the Canadian lab in Winnipeg were involved in the smuggling of coronavirus to Wuhan’s lab in July of last year.

As a further fun fact, the Washington Times reported that Wuhan is also the site of two Chinese biological labs according to Dany Shoham, a former Israeli military intelligence officer who has studied Chinese biowarfare. The report suggests the virus was either accidentally let out or deliberately. If true, it would explain how the coronavius evolved so fast to jump from animals to humans.

Lancet medical journal recently published a study finding that many of the first cases of the novel coronavirus, excluding patient zero, had no connection to the wet market, leading many including Boyle to speculate with grandiose evidence listed above that the virus may have been a bio accident. Other DNA sleuths at the New England Journal of Medicine and the National Institutes of Health continue to investigate.

Are there really over 100,000 people now infected in China alone? Was the virus origin a bio-weapon or an accident that escaped the lab? The truth of the matter is we don’t know; what we do know is that people should be allowed to freely share information and be prepared not scared into intimidation and arrested like cases in China, Malaysia and Thailand. Further, reporters — especially those of us in alternative media — should report the evidence that is presented, and if it is speculation call it as such; don’t scare the public, use your platform to inform not drive fear.

There is nothing wrong with questioning the narrative, especially one coming out of China. There is an issue with staying silent and drinking the Chinese Communist Party kool-aid about official numbers, while evidence points elsewhere. With that said, the figures presented above could have been digitally altered using inspect element, as Daily Mail reported. But if multiple people were reporting it, and they have, that becomes less likely.

If the numbers from the alleged Tencent leak prove to be accurate, it would put this coronavirus mortality rate at almost 16%. By comparison, SARS’ mortality rate was 9.6%.

The fact that anyone would be arrested for spreading information not sanctioned by governments, when everyone is on edge and wondering what is happening, is in itself insanity — welcome to the Ministry Of Truth. Especially if China is lying about the official number of cases and deaths … and that’s a high probability considering they lied about SARS prior, which was a biological accident 3 out of the 4 times according to the World Health Organization.

Subscription is FREE and CONFIDENTIAL
Free Report: How To Survive The Job Automation Apocalypse with subscription
Share369
Tweet
Pin

Be the first to comment on "Tencent App May Have Leaked Real Figures Of Coronavirus In China; 400 Million Locked Down In Cities"