As of December 27, 2019, at least 27 people have been killed and thousands have been arrested amid demonstrations in India against the Citizenship Amendment Act (CAA), a new law that allows immigrants of religious minorities in Afghanistan, Pakistan, and Bangladesh to seek Indian citizenship while excluding Muslims from that prerogative.

Passed in early December, the new law has put India’s 200 million Muslims on high alert and joins a growing list of controversies spurred by the Bharatiya Janata Party-led government, which is accused of pushing a Hindu-nationalist agenda. Critics say that the CAA undermines India’s secular 1949 Constitution which ensures equality for all religions.

Mass demonstrations have engulfed both large and small cities nationwide, including Mumbai, New Delhi, Lucknow, Bangalore, and Malegaon. Authorities have responded with a brutal crackdown, as well as restrictions on street protests and internet shutdowns. Protests against the Citizenship Amendment Act (CAA) and the National Register of Citizens (NRC) in Mumbai. December 19, 2019. Image by Vishal Yashoda, CC-BY.

In August 2019, the BJP-led parliament abrogated the autonomy status of Muslim-majority state Jammu and Kashmir, which has since been subjected to curfews, restrictions on public transportation, and a near-total blackout.

On November 9, 2019, the Supreme Court ruled in favor of the government in the Ayodhya dispute of 1992 when Hindu radicals razed down the Babri Mosque in Uttar Pradesh, leading to nationwide violence between Hindus and Muslims. The final verdict ordered the contested land to be hand over to the government for building a Hindu site.

Another upcoming controversial measure by the BJP is the National Register of Citizens, a comprehensive database of every Indian resident. Critics fear that the purpose of this list is to identify “undesirable” and force them to prove their right to Indian citizenship. The recent construction of detention centers in the Western state of Maharashtra have raised suspicions that the government plans to arrest citizens without documentation identified by the NRC. Similar mass detention centres have been rolled out in Assam state and constructions are underway.

Amid the CAA protests, the BJP secured funds to go ahead with the database, although Prime Minister Narendra Modi said the matter is still under study.

The BJP party is currently facing opposition to the Citizenship Act from 10 state governments, including Punjab, West Bengal, Kerala, Maharashtra, and Jharkhand.

German citizen Jakob Lindenthal, who was studying at IIT Madras in Chennai, attended a recent protest carrying a sign that referenced Nazi rule in his country between 1933 to 1945 (“we have been there,” the sign read). After a photo of the placard made waves on social media, Lidenthal was asked to leave India for “violating visa norms.”

As he arrived home, Lidenthal posted a message on Facebook expressing solidarity with protesters and concern for the deterioration of civil rights in the world’s largest democracy:

Jakob Lindenthal, the German student expelled from IIT Madras has a message for us all. pic.twitter.com/CxGnlKyfGK

Prominent historian Ramachandra Guha was among the people arrested during the protests in the city of Bengaluru:

Historian Ramachandra Guha is among the protestors who came in waves to Town Hall, Bengaluru and were detained. pic.twitter.com/yRY45drPU2

Internet shutdowns have been reported in the capital Delhi and, according to Access Now, the block was ordered by India’s Ministry of Home Affairs:

Reports indicate that the Special Branch of the Delhi Police — controlled directly by the Government of India’s Ministry of Home Affairs —  ordered service providers via a letter to suspend internet connections.

These are the #InternetShutdowns in #UttarPradesh right now. Please note that the list is not exhaustive and we will keep adding to it.

Amidst the internet shutdowns, offline messaging apps like Bridgefy, FireChat, among others, have gained popularity.

Several incidents of stone-pelting by protesters and heavy-handedness by police officials have surfaced on social media. In Uttar Pradesh, authorities allegedly confiscated land and other private property of Muslim citizens. Over 17 people have died in protests in that state alone.

Locals in UP’s Bijnor have alleged that after protests over CAA, the UP Police has been vandalising homes, harassing women and threatening children to disclose the location of the male members of their families. A current offline ground report from Bijnor
https://t.co/c6P4KjhlRa

Many protesters are also being sued:

There have been protests against the Citizenship Amendment Act abroad as well, including in London, New York, Paris, Tokyo, and others.

In the period between December 17 and 19, hundreds of Indian students from institutions such as Oxford, Harvard, Cambridge, Columbia, University of Massachusetts, and many others organised peaceful protests against the CAA.#CAA_NRCProtestshttps://t.co/GDeGVW2hDn

They have raised their voices in solidarity with Indian protesters and against the violence in Jamia Millia University. 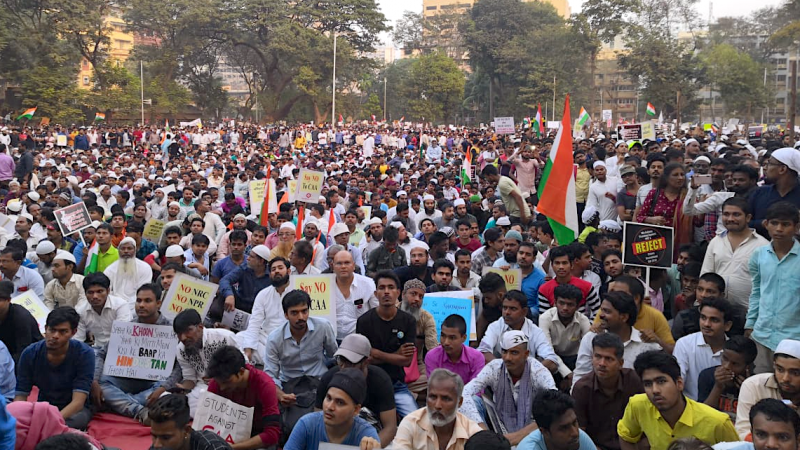 Protests against the Citizenship Amendment Act (CAA) and the National Register of Citizens (NRC) in Mumbai. December 19, 2019. Photo by Vishal Yashoda.

A strong manifestation of India-first among Indian Muslims offers an opportunity for all politicians and political parties to bury the old paradigm and make a new beginning based upon mutual trust, constitutional democracy and equality. Are there any takers?

Vishal Yoshoda is an Indian journalist with a keen interest in foreign policy and science journalism.