The U.S. Immigration and Customs Enforcement agency accidentally revealed the location of a new “urban warfare” training facility that is expected to include “hyper-realistic” simulations of homes, hotels and commercial buildings in Chicago and Arizona, Newsweek reported.

The “hyper-realistic” urban training ground will be housed in Fort Benning, Georgia the report details. The information was revealed after ICE failed to redact its acquisition form document that was posted online. After copying and pasting the document’s contents into a separate document, Newsweek said it was able to establish that the facility will be built at the U.S. Army post.

This is significant since Fort Benning is the same location where ICE houses its Office of Training and Tactical Programs (OTTP) Firearms and Tactics Division according to a May 2017 news release published on ICE’s website.

The agency states that hyper-realism is defined as “a critical component to this acquisition as the details provide essential information that must be acknowledged, processed and acted upon to minimize risk to our Special Agents, Deportation Officers and SRT operators during high-risk search and arrest warrants, fugitive operations, undercover operations, hostage rescue, gang operations, etc.”

“For example, details like the number of dishes left on the table, toys in the yard, lighting, furniture, etc. all provide clues that allow our agents and officers to infer vital information that directly affects their safety and the potential resolution or outcome in the scenario,” the document reads. “Learning to process this information quickly to identify whether there are children present, or how many people are currently in the structure is a necessary skill developed in training.”

The agency goes on to express in full detail how the Defense Science Board task force “found that the probability of being a casualty decreases significantly after the first few ‘decisive combats’.” According to the agency, “these hyper-realistic devices will allow the teams to have those experiences in real-world conditions without the real-world casualties.”

“ICE is specifically interested in acquiring a ‘Chicago’ style replica, as well as an ‘Arizona’ style replica, with the agency expecting to dedicate a total estimated value of $961,347.75 to the effort,” Newsweek reported. 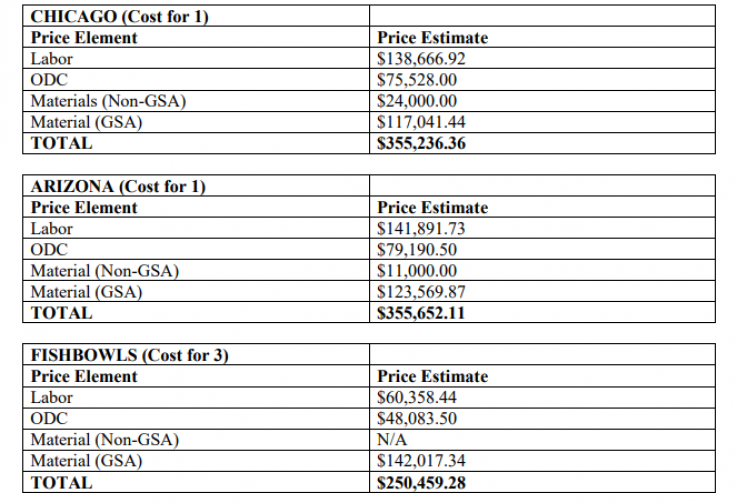 ICE removed the unredacted document from the FBO website. However, the following day, ICE republished the document with Fort Benning named as the site where the new training facility would be built, after the information seemingly went viral.

ICE Division Chief Bert Medina stated to Newsweek that ICE trains “experienced law enforcement personnel in the use of force and existing weapons in application of force.”

“In addition, we provide law enforcement instructors [with] the skills and abilities to teach use of force and defensive techniques with and without weapons so they can prepare ICE officers on the front lines of federal law enforcement to perform their duties safely and in accordance with standards,” Medina added.

This is not the first incident in which ICE failed to properly redact a document. Just last month, the agency accidentally revealed the value of a renewed contract with software company Palantir. That agreement with Palantir and ICE could be worth an overwhelming $49 million in just three years, according to Mother Jones which noticed the screw-up by the agency.

Activist Post previously reported Palantir’s Gotham software was revealed to be used by Fusion Center police to track down anyone, including immigrants.

Fusion Center police can now utilize the technology to track citizens beyond social media and online web accounts with people record searches, vehicle record searches, a Histogram tool, a Map tool, and an Object Explorer tool. This author further pointed out that Palantir’s software mirrored the “Prosecutor’s Management Information System (PROMIS) stolen software Main Core and may be the next evolution in that code, which allegedly predated PRISM. In 2008, Salon.com published details about a top-secret government database that might have been at the heart of the Bush administration’s domestic spying operations. The database known as “Main Core” reportedly collected and stored vast amounts of personal and financial data about millions of Americans in event of an emergency like Martial Law.

As this author also wrote:

The only difference is, again, this technology is being allowed to be deployed by Fusion Center designated police and not just the National Security Agency. Therefore, this expands the power that Fusion Center police — consisting of local law enforcement, other local government employees, as well as Department of Homeland Security personnel — have over individual American citizens.

This is a huge leap from allowing NSA agents to access PRISM database search software or being paid by the government to mine social media for “terrorists.”

On a deeper level, when you combine the capabilities of Palantir’s Gotham software, the abuse of the Department of Motor Vehicles (DMV) database for Federal Bureau of Investigations/Immigration and Customs Enforcement, and facial recognition technology, you have the formula for a nightmarish surveillance state.

Facial recognition is even being pushed into entertainment of concert venues, as Activist Post reported, which is downright grooming the public into submission and acceptance of facial tracking technology while further promoting a nanny state.

First its the immigrants, than its Antifa, and finally it is dissident Americans that the government considers to be “trouble makers” for whatever reason. It’s downright dangerous to allow training of ICE in realistic buildings and give the agency access to Palantir’s Gotham or other more powerful software without any oversight from the American people and Congress. This type of activity should be halted immediately before it grows tentacles into an octopus paramilitary force that can’t be stopped.

It’s worth noting, in 2012, a year after then-President Obama signed NDAA 2011 allowing the indefinite detention of dissident Americans, the Pentagon created a plan for imprisoning activists at re-education camps. Then a U.S. Army manual that allegedly outlined the resettling of U.S. citizens was leaked online to Public Intelligence entitled: “FM 3-39.40 Internment and Resettlement Operations.”

With ICE as an agency under the DHS training in “hyper-realistic” training grounds on an Army base, everyone should not only be extremely worried, but the paranoia should settle in knowing ICE has in its hands Palantir software based off Main Core as well.