On Feb. 7, US Rep. Alexandria Ocasio-Cortez and US Sen. Ed Markey introduced legislation known as the Green New Deal.

You’ve probably heard of it. It’s a big deal, to paraphrase Joe Biden.

The History of New Deals

Wikipedia, the Internet’s fountain of knowledge, describes the legislation as “a proposed stimulus package that aims to address climate change and economic inequality.”

Okay. But what is that?

If the term “new deal” sounds familiar, it should. It’s a reference to FDR’s New Deal, which was itself a play off of Teddy Roosevelt’s Square Deal. (Politicians don’t win extra points for originality.)

So just imagine FDR’s New Deal took the Paris Climate Agreement out for drinks, one thing led to another, and—voila—nine months later they had a baby: The Green New Deal.

So what should we make of this Green New Deal? Since climate change is bad, and inequality is bad, can we assume the Green New Deal is good?

Have an Informed Opinion

Well, that’s for you to decide. But here are 44 facts and reflections on the GND to consider:

2. That’s a scary number. But even if we accept such a figure, it’s important to note, as Tim Worstall has, that we’re talking about .05 percent of the total US economy in 2100.

3. That $500 billion price tag, in context, is rather small, then—at least compared to what AOC’s legislation would cost. Some estimates put the price tag at $93 trillion.

4. Relax, relax. Fact-checking organizations are probably right when they say that these figures are mostly pulled out of a, ahem, hat (much like AOC’s own $500 billion figure).

5. In fact, all these big numbers make me think of this:

6. So why do we need to spend all those trillions in the first place? One reason AOC cites is “a 4-decade trend of wage stagnation.”

7. The problem? The wage narrative, as Bloomberg recently pointed out, is a myth. As in not true.

8. That’s right. Although wages flattened (briefly) in the mid-’90s, they have grown steadily since, according to Federal Reserve data.

10. Ditto on overall economic growth. Fact: Real GDP growth, per capita, has averaged nearly 1.7 percent per year since 1980. At that rate, the average person’s standard of living doubles every four decades or so.

12. Some of these are accurate. Others are not. But the point is that from reading the GND, one would have no idea that Ms. Ocasio-Cortez is living in the most prosperous era in human history.

13. The capitalism AOC decries as “irredeemable” has given us this:

14. Ms. Ocasio-Cortez can cite “life expectancy declining” as a reason to pass her GND. But take a look at the actual data on US life expectancy over the last 135 years. 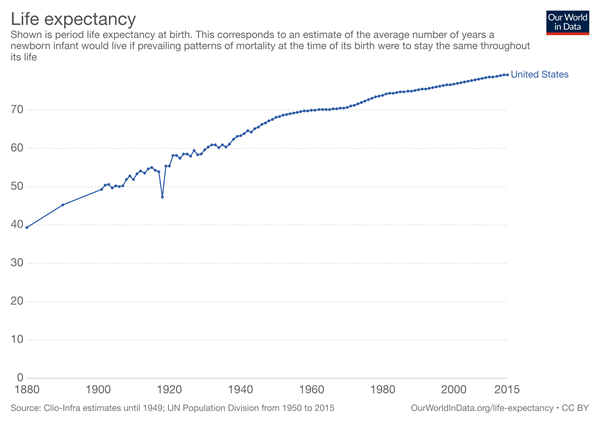 15. Sure, life expectancy did briefly dip between 2014 and 2016—by three-tenths of 1 percent. However, that decline was the result of drug overdoses and suicides. The trend has nothing to do with climate change and, more importantly, it’s a trend that’s not expected to continue. 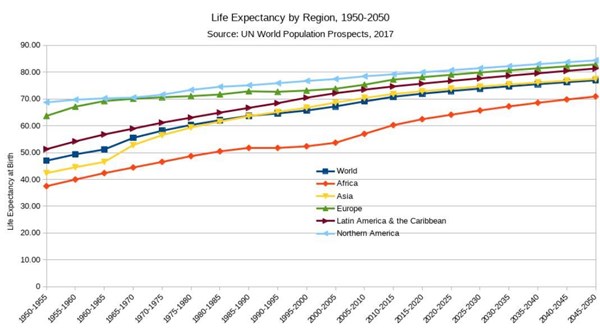 16. Okay, okay, okay, you say. But what about the climate? What good is wealth and a long life if the planet BOILS IN A LAKE OF FIRE?!

17. Because that’s what AOC said is going to happen. “We’re, like, the world is going to end in 12 years if we don’t address climate change,” she explained in January.

19. AOC might be right. Or maybe O’Rourke is. On the other hand, some scientists who have, like, Nobel Prizes, are less convinced that a global warming apocalypse is upon us.

20. Perhaps realizing that there is a small chance the world will still be here in 2031, AOC recently hedged on her assertion that the world will end in 12 years if we don’t act.

This is a technique of the GOP, to take dry humor + sarcasm literally and “fact check” it.

Like the “world ending in 12 years” thing, you’d have to have the social intelligence of a sea sponge to think it’s literal.

But the GOP is basically Dwight from The Office so who knows. https://t.co/pmkwrdeAnq

23. And yet—the GND is still on the table, and fossil fuels are still the enemy. In fact, the stated goal of the GND is to meet “100 percent of the power demand in the United States through clean, renewable, and zero-emission energy sources.”

24. Is this possible? The cars we drive, the homes we cool and heat, and the lights that illuminate our world all require vast amounts of energy. How much energy? Well, Americans on average use about 310 million BTU annually. That’s roughly 1.005400000E+17 nationally.

25. The lowest cost alternative to coal and natural gas is nuclear energy. The US currently has 99 nuclear reactors, each of which have a generating capacity between 582 megawatts and 3937 megawatts. Together, these 99 reactors generate 20 percent of US electricity.

26. Sixty-three percent of US electricity comes from fossil fuels, however. To switch that 63 percent to nuclear energy would require more than 200 additional nuclear reactors. At approximately $15 billion per plant, the total cost over the 10-year period would be around $3 trillion just to build the reactors.

28. Graciously, however, she said she will allow nuclear plants already built to continue operating… for now. Her office said that’s because it’s unclear just how fast “we will be able to decommission every nuclear plant.”

29. This is odd because nuclear power is safe, cheap, reliable, and generates zero greenhouse gasses. That’s why the Union of Concerned Scientists recently said nuclear energy is necessary to address climate change.

30. In fact, the idea that we could come close to meeting our energy needs without fossil fuels, nuclear plants, or a historic breakthrough in fusion is, well…

31. Perhaps this is why House Speaker Nancy Pelosi came up with pet name for the Green New Deal: “The Green Dream or Whatever.”

32. Pelosi didn’t stop there. “It’s enthusiastic, and I appreciate the enthusiasm,” said the House Speaker.

33. Ouch. Perhaps this is why AOC backed off and said maybe nuclear energy is still on the table.

34. Either way, the Green New Deal would mean big changes. But how big? And how would those changes be made? Steve Inskeep, a journalist at NPR and host of the Morning Edition program, asked AOC if her plan requires “massive government intervention.”

35. “It does. It does. Yeah. I have no problem saying that,” she responded, according to the transcript.

36. Say what you will about AOC, she deserves points for honesty. At least that morning she did. Here is what she said later in the day: “One way the right tries to mischaracterize what we’re doing as though it’s like some kind of massive government takeover… obviously, it’s not that.”

37. The Green New Deal, it’s safe to say, is rather confusing. The big question: How worried should you be?

38. Not that worried, actually. The legislation that comprises the GND, as Factcheck.org explains, is nonbinding. This means that if the bill passes, it will not “have the force of law.”

39. That’s right. Political parties and pundits have spent millions of hours(ish) talking about legislation that is essentially meaningless. The GND, one could say, is a massive PR stunt. (Consider this: if you Google “Green New Deal,” you’ll get 2.32 billion—billion—hits in .62 seconds.)

40. That’s frustrating, but keep in mind: a) politics is dumb; b) we should be thankful—exceedingly thankful—the Green New Deal will not have the power of law behind it should it actually pass.

41. Why? Because as former Greenpeace president Patrick Moore pointed out, untold numbers of people likely would die if the GND became binding law.

You don’t have a plan to grow food for 8 billion people without fossil fuels, or get food into the cities. Horses? If fossil fuels were banned every tree in the world would be cut down for fuel for cooking and heating. You would bring about mass death.

42. Yeah, that’s kind of terrifying. Now, nobody is saying AOC wants millions to die. No one wants that. But it’s an overlooked fact that most of the horrors of the 20th century were committed by people attempting to use government and force to improve the world, not markets and free exchange.

43. “The curious task of economics is to demonstrate to [humans] how little they really know about what they imagine they can design,” the Nobel Prize-winning economist F.A. Hayek observed in The Fatal Conceit.

READ THE GREEN NEW DEAL FOR YOURSELF HERE.

For the full GIF-ed out version, be sure to see the original post at FEE.org

Don’t Do Your Own Research!!! — Propaganda Watch