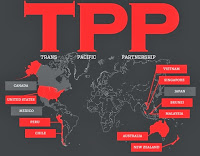 After years of secret trade negotiations over the future of intellectual property rights (and limits on those rights), the public gets a chance to looks at the results. For those of us who care about free speech and a balanced intellectual property system that encourages innovation, creativity, and access to knowledge, it’s not a pretty picture.

Today Wikileaks published a complete draft of the Trans-Pacific Partnership (TPP) agreement’s chapter on “intellectual property rights.” The leaked text, from August 2013, confirms long-standing suspicions about the harm the agreement could do to users’ rights and a free and open Internet. From locking in excessive copyright term limits to further entrenching failed policies that give legal teeth to Digital Rights Management (DRM) tools, the TPP text we’ve seen today reflects a terrible but unsurprising truth: an agreement negotiated in near-total secrecy, including corporations but excluding the public, comes out as an anti-user wish list of industry-friendly policies.

Despite the Obama administration’s top U.S. negotiators’ fast approaching their self-imposed 2013 deadline to complete the agreement, today’s leak is the public’s first look at the sprawling text since a February 2011 leak [pdf] of the same chapter and a July 2012 leak of an individual section. And even as the public has been completely shut out, the U.S. Trade Representative has lobbied for wider latitude to negotiate and for “fast-track authority” to bypass Congressional review.

The document Wikileaks has published contains nearly 100 pages of bracketed text—meaning it includes annotated sections that are proposed and opposed by the negotiating countries. The text is not final, but the story it tells so far is unmistakable: United States negotiators (with occasional help from others) repeatedly pushing for restrictive policies, and facing only limited opposition, coming from countries like Chile, Canada, New Zealand, and Malaysia.
Copyright Terms

The leaked chapter features proposals for setting a new “floor” for copyright duration, ranging from the already problematic U.S. term of life of the author plus 70 years to an incredible life of the author plus 100 years, proposed by Mexico. Such bloated term lengths benefit only a vanishingly small portion of available works, and impoverish the public domain of our collective history. The U.S. is also pushing for countries to embrace terms lengths of 95 years for corporate and 120 years for unpublished works.

Extending term lengths in the U.S. was already a bad idea. The U.S. Trade Rep shouldn’t be compounding it by forcing other countries to follow suit. Countries around the world that have shorter term lengths than the U.S. celebrate the arrival each year of new works into the public domain, and the economic activity that can accompany them. Since the 1998 passage of the Sonny Bono Copyright Term Extension Act, however, the U.S. will see no new published works enter the public domain until 2019. The proposal in TPP would export that sort of restriction to all the countries that join it.

These expansive terms have also exacerbated the widely recognized problem of “orphan works” also known as “hostage works.” These are works where the rightsholder can’t be identified or located and, therefore, folks are afraid to use them, publish them online, etc, lest the rightsholder appear at last and file a lawsuit. As a result, millions of works effectively disappear from the cultural commons until their copyright terms at long last expire. Earlier this year, the U.S. Register of Copyrights advised a reduction or limitation in term length as a possible solution. Crystallizing U.S. term lengths in international agreements would frustrate efforts to enact such reasonable policies. This is a classic example of policy laundering, whereby corporate interests use secretive international forums to trump the democratic process at the national level.

Fair Use and Fair Dealing

Although the addition of the “3-step test” for fair use provisions was hailed by the U.S. Trade Representative as a major step forward for users’ rights in trade agreements, its original intention has been subverted. It now may serve as a ceiling on rights, and not a floor.

The agreement claims not to confine copyright limitations and exceptions further than earlier deals, such as the Berne Convention, but early analysis from groups like Knowledge Ecology International (KEI) suggests that’s not the case. Functionally, TPP as drafted creates a tightly circumscribed space in which countries can grant rights like fair use and fair dealing to its citizens.

The newly leaked text reveals substantial disagreement over the language on copyright liability for Internet Service Providers (ISPs) and other online platforms. The February 2011 leak contained extensive language that would have imposed regulatory requirements to police users’ activities online and paved the way for systems like three-strikes take down policies andISPs filtering and blocking access to websites that allegedly infringe or facilitate copyright infringement.

Even though the text appears to be very much in flux, it’s clear from the leaked chapter that Canada is pushing back hard against U.S. pressure to adopt draconian copyright enforcement measures. A majority of countries appear to be proposing language that would give them some flexibility to limit the liability of ISPs, so they can develop enforcement frameworks that best suit their national laws and priorities. That flexibility is essential to staving off copyright enforcement laws that in practice would violate users’ free speech and privacy. And yet the U.S., backed by Australia, opposes this language.

The leaked draft includes controversial language calling for laws prohibiting the circumvention of “technological protection measures,” also known as DRM. The U.S. has had such a law in place for over 15 years, and it’s been a disaster for free speech and competition, chilling the legitimate speech of innovators, filmmakers, security researchers, and many others. In fact, it’s so bad that President Obama and many in Congress have said it must be reformed. Just as much of the U.S. public is realizing our anti-circumvention law was a mistake in the first place, we’re not only trying to export it but also potentially impeding our own ability to fix it.

Despite numerous heroic proposals for fixes, most notably from Canada and Chile, the articles as drafted include many such dangerous provisions. Though the text remains unsettled, the current proposal calls for criminal liability for violations of these anti-circumvention provisions, except for when conducted by a non-profit.

Worse, because of the broad language, this criminal liability could apply to people circumventing these restrictions even where the underlying work is not covered by copyright.

The strict regulation of temporary copies reflected in the February 2011 leak was a startling throwback to an outmoded and dangerous idea: that copyright should apply even to ephemeral copies. The implications are staggering. Computers and networks create, in the normal course of operation, temporary and ephemeral copies. Regulations on these sorts of copies, as described in the earlier leak, would interfere with basic technical operations and give rightsholders an opportunity to sit on an essential chokepoint of the Internet.

Fortunately, negotiators may have recognized the fundamental folly of this proposal. Although the U.S. has yet to support any reasonable text on this topic, the draft leaked today included a proposed clarification that temporary copies may be exempted from copyright restrictions.Language from Chile, New Zealand, and Malaysia proposes that countries may make these exemptions for: temporary acts of reproduction which are transient or incidental and an integral and essential part of a technological process and whose sole purpose is to enable (a) a lawful transmission in a network between third parties by an intermediary; or (b) a lawful use of a work; and which have no independent economic significance.

Similar language appears in a footnote proposed by a larger group of countries that does not include the U.S., and which negotiators have noted faces “no substantive objection to the concept” but which is not yet finalized.

The leaked draft reveals that the US is pushing hard for provisions expanding the reach of patent law and limiting ways in which a patent may be revoked. These proposals are meeting widespread opposition from the other participants. For example, the U.S. proposes—and nearly every other nation opposes—that patents be made available for inventions that are “plants and animals.”

The U.S. also proposes language that would prohibit denying “a patent solely on the basis that the product did not result in enhanced efficacy of the known product.” Again, nearly every other nation opposes the U.S. on this issue. And a good thing too. Setting the bar to patentability too low locks up innovation. Advocates for access to medicine argue that it allows pharmaceutical companies delay generic entry through “evergreening.” In other technology areas, the U.S. is seeing the terrible consequences of a flood of low-quality software patents, many of which are for minor improvements on existing technology. There’s no reason for an international treaty to export the problems of the U.S. patent regime.

The latest TPP leak confirms our longstanding fears about these negotiations. The USTR is pushing for regulations that would, for the most part, put the desires of major content and patent owners over the needs of the public. No wonder the negotiators want to keep the process secret. There are marginal improvements since February 2011, but they are not enough. Real and substantially balanced proposals will not happen unless and until negotiators can be held accountable to the public for the proposals they are making.

Rest assured: if they can’t be challenged now, they will surely be challenged later. Internet users have proven that they will not stand for backroom deals that put their freedoms at risk.

Be the first to comment on "TPP Leak Confirms the Worst: US Negotiators Still Trying to Trade Away Internet Freedoms"