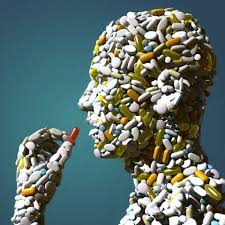 Robots are quickly outsourcing humans in the workforce as a supposed measure against brutal working conditions, inefficiency, human laziness and biological weaknesses.

Until now, it has been argued that robots actually free up the potential of humans to engage in the skilled labor where they belong, rather than the mundane drudgery of repetitive tasks like assembly lines, for instance.

However, current trends are demonstrating that even skilled labor will soon be replaced. In fact, this is happening across the board in areas such as remote control manufacturing, AI-enhanced domestic service, and, of course, warfare.

In the medical field we are now seeing robotic assistants in surgery and diagnostics, as well as research, manufacturing and dispensing.  Enter ROBOT-Rx: quite possibly the pharmacist of the future.

Working in tandem with a system that declares “your name is a barcode” ROBOT-Rx dispenses medications with a 99.9% accuracy and can even prioritize orders and fill them in the most logical sequence.  According to Singularity Hub, this pill robot is already dispensing 350 million doses annually at over 1/3 of medium and large hospital pharmacies in America.

Citing medical and dispensing errors as a leading cause of death by pharmaceuticals, Robot-Rx is being fully embraced by the medical establishment.  Naturally, what is not noted are the dangers of the pharmaceuticals themselves, which cause more than 2.2 million hospitalizations and 110,000 hospital-based deaths a year.

Thanks to ROBOT-Rx, Big Pharma will dispense death in an increasingly efficient and rapid-fire manner to the pill-popping public who await with open mouths their latest round from the disease machine.

Be the first to comment on "Pill Robot: The Pharmacist of the Future?"