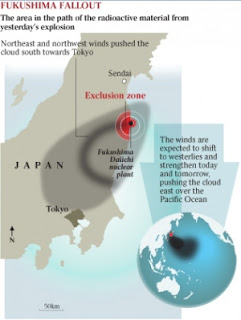 In a deepening tragedy, after an earthquake and tsunami caused four explosions at nuclear reactor plants in Japan, most of those who evacuated the area headed south, since winds normally would have pushed the radioactive clouds to the north and east. Instead, winds pushed the r-clouds south, according to The Australian. The shift in winds now threatens Hawaii with fallout from the Fukushima nuclear facilities.

Officials finally admit radiation has reached lethal levels in the area surrounding the explosions. Tokyo, 200 miles to the south, is also seeing higher levels of radiation. “[A]bnormal radiation and traces of radioactive elements were detected around Greater Tokyo, the world’s most populous metropolitan region with 36 million people.”

Though initial mainstream news sources downplayed the danger, mocking the following map which has gone viral, it now seems wise for North Americans on the West Coast to consider relocating, at least temporarily. Radioactive winds are expected to hit North America tonight. 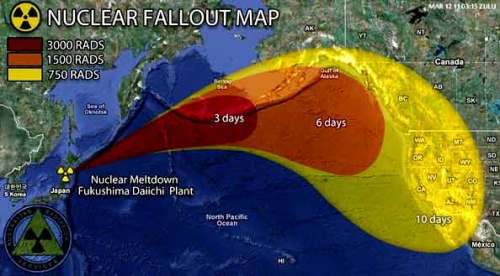 Below is the sequence of events based on current information:

Reactor No. 1. First explosion, March 11 at Fukushima Daiichi plant on east coast, 200 miles north of Tokyo. A hydrogen explosion caused by nuclear fuel rods overheating and then coming into contact with water collapsed the outside walls and roof of containment vessel. Hourly radiation leaking from Fukushima is equal to amount permitted in one year, official tells Kyodo. The nuclear agency says that they have detected cesium and iodine outside the unit, which certainly indicates fuel melting at the very least. Noriyuki Shikata, Dir. of Communitions for Prime Minister tweets: Blast was caused by accumulated hydrogen combined with oxygen in the space between container and outer structure. No damage to container. (BradBlog citing several sources)

Reactor No. 3. Second explosion, March 12 Containment vessel housing the fuel rods was not breached, per officials. Explosion damaged the reactor building, but not the nuclear containment vessel. The Fukushima facility began using MOX (mixed oxide) fuel last September, becoming the third plant in Japan to do so. MOX fuel has a lower melting point than the other fuels and contains plutonium, making it more volatile and toxic than the fuel used in other reactors. (Also see BradBlog and CLG, collected here.)

Reactor No. 2. Third explosion, March 13 The emergency cooling system at Unit 2 was damaged during the Unit 3 blast, resulting in the uranium fuel rods at 2 becoming dangerously, and completely, exposed for a number of hours. Containment vessel is damaged, radiation leak feared. Bottom of containment vessel blows. There are several containers around the nuclear fuel for the reactor. The fuel itself is inside rods, which are, in turn, inside a steal and concrete container vessel, currently filled — or partially filled, in this case — with sea water, to try to cool the fuel rods. If the container vessel, “the last line of defense from keeping the radioactivity from being released,” has been damaged by the explosion, fuel and radioactivity could leak into the environment. (BradBlog and CLG, collected here.)

BBC reports “Japanese engineer Masashi Goto, who helped design the containment vessel for Fukushima’s reactor core, says the design was not enough to withstand earthquakes or tsunami …” MSNBC notes there are 23 virtually-identical reactors in the U.S. built by General Electric.

This global catastrophe highlights the lunacy of building nuclear power plants on an island that sees 1,500 earthquakes a year.

Rady Ananda holds a B.S. in Natural Resources from The Ohio State University’s School of Agriculture.  Her work has appeared in several online and print publications. Using years of editorial experience and web publishing, Rady now promotes the ideas and work of a select group of quality writers and artists at Food Freedom and COTO Report.

Be the first to comment on "Winds chase evacuees in Japan; Hawaii threatened by Fukushima fallout"