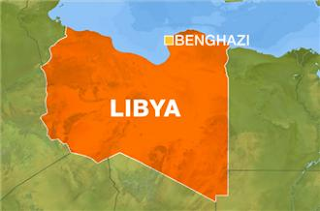 From the very beginning the US-backed Libyan unrest played out in oafish measures, crutched along by the most irresponsible, intellectually dishonest “journalism” to date. A week before the unrest began, it was the the London based National Conference of Libyan Opposition (NCLO) that called for the February 17th “Day of Rage,” not Libyans in the streets of Tripoli or Benghazi.

The NCLO itself was created in London in 2005 by Ibrahim Sahad and his National Front for the Salvation of Libya (NFSL), which in turn has been one of the leading Libyan opposition groups since the 1980’s. The Daily Globe and Mail has reported that Sahad’s NFSL had been behind several attempted armed uprisings and assassination attempts against Qaddafi in the 1980’s, while records found in the US Library of Congress indicate Sahad’s NFSL had CIA support and training.

Sahad himself now directs the unrest in Libya from Washington D.C. while giving interviews with the corporate owned media literally in front of the White House.

Initial reports coming out of Libya after Sahad’s “Day of Rage” unfolded, told tales of bone-chilling atrocities committed by Qaddafi against “unarmed protesters.” Qaddafi was accused of strafing crowds of unarmed protesters from the air, storming hospitals and kidnapping injured patients, mosque massacres, and just about anything else the imaginations of the corporate owned media could conjure up. BBC did however concede that nearly all of their reports were impossible to confirm, as they were all entirely based on opposition “witness accounts.”

This week, Russian military officials boldly asserted that such air strikes never took place, and even the US Department of Defense was forced to concede that such attacks could not be confirmed.

Secretary of Defense Robert Gates was asked recently “Do you see any evidence that he [Qaddafi] actually has fired on his own people from the air?” to which he responded by saying, “We’ve seen the press reports, but we have no confirmation of that.” Admiral Mullen added, “That’s correct. We’ve seen no confirmation whatsoever.”

The reality now appears that the “protesters” are actually heavily armed insurgents who obliterated entire sections of steel-reinforced concrete walls of a Benghazi army base, then seized heavy artillery and armored vehicles before shoring up armed rebels in nearby towns and cities. The New York Times reported that weapons were coming in across the Egyptian border, while US and UK government mouthpieces called for providing additional arms and training for the rebels. The New York Times’ latest piece, “Libyan Rebels Said to Debate Seeking U.N. Airstrikes” features images of insurgents receiving military training, further suggesting the unrest is the result of a yet another NFSL military operation rather than a “spontaneous” protest turned violent.

Interestingly enough, the New York Times piece also depicts the UN enforced no-fly zone as now being an opportunity to offensively cripple Qaddafi’s forces and dislodge him from power. Knowing now that the “atrocities” Qaddafi supposedly committed never happened and that the US has been intentionally trumping up war propaganda to ensure yet another NFSL uprising didn’t fail, we can assume that offensive intervention was the globalists’ plan from the beginning.

With the entire justification for US/NATO/UN intervention unraveling before military assets are even put into place, is the Anglo-American establishment so utterly desperate as to continue on in spite of reality and an awakening public? Is it not bad enough the Libyan opposition is openly working out of Washington D.C., but to also have the US military assist these foreign backed rebels into power at the cost of Libya’s sovereignty? Qaddafi has been accused of many things as of late – but it appears when everyone tells their side of the story, his regime’s tale of a foreign plot strikes closer to the truth than the rest of the “international community.”

The “international community,” in this latest display of intellectual dishonesty, poor statesmanship, horrific double standards, and outright unwarranted aggression, has forfeited the last of whatever legitimacy it may have claimed to hold. The American and British oligarchs in particular have shown the world they are irresponsible, back-stabbing, meddling rouges interfering with the sovereignty of other nations through invasive diplomacy, propaganda, and direct military force. Worse yet, they do so on behalf of expanding their financial empires, as their “humanitarian concerns” are utterly laughable considering the mayhem they are conducting in Iraq, Afghanistan, and Pakistan where civilian populations really are being strafed from the air. Whatever the globalists do from this point on, they do so with zero legitimacy and the resulting bloodshed is entirely on their hands.