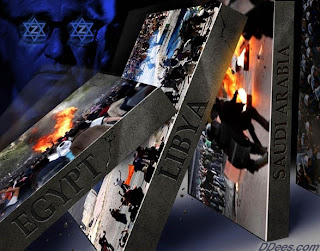 Looks like the PNAC, or Project for A New American Century, agenda of 1997 is rolling along as planned.  Just as has been outlined by other think tanks, Illuminati writers and social programmers.

But a blind world reels on the defensive when they could have known what was coming all along.  Notice, mind you, that the portrayal of an unstable Middle East includes every “rogue” nation BUT Israel. Israel oddly enough is never “on the table” for discussion, when in fact they are the fomentors and co-creators of the entire “terrorist” threat fabrication.

Recent Developments
If you want to know exactly what’s happening or about to transpire, keep an eye on Neocons like Bill Kristol at rabid Zionist Murdock’s Fox News, the former head of PNAC when they made their famous study, proposal and “Statement of Principles” preceding the staged 9/11 events and ensuing bogus “war on terror”.

It looks like despite Obama’s “promises” to not send troops, we’re about do it anyway. Surprise. So expect a real good reason to be fabricated soon, like tales of horrific atrocities by Gaddafi, to make sure the public is behind it. A false flag or two within Libya is probably on the table right now, like the staged theatre fire massacre in Abadan, Iran during the Iran revolution.