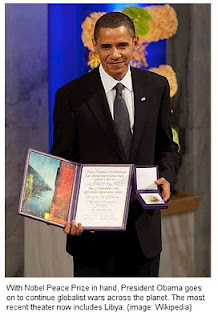 The corporate-financiers are dangerously flirting with their entire official narrative collapsing, as their progressive, Peace-Prize wearing puppet President Obama and the “radical reformer” David Cameron lead yet another war based on an Iraq-style pack of lies.

After weeks of peddling a litany of verifiable lies, the West has forgone any attempt to justify or veil their actions in legitimacy and has decided to go ahead with a UN rubber-stamped “no-fly zone.” Far from having anything to do with preventing Qaddafi’s planes from flying, the no-fly zone has translated into full-scale missile and aerial bombardments across Libya aimed at turning the tide for freshly rearmed Western-backed rebels.

The pack of lies.

Indeed, the same London Telegraph now dashing across their headlines “Britain and America have rained missiles on Libya as Col Muammar Gaddafi defied the world and continued to attack civilians,” told us in the early stages of the US-backed Libyan unrest that Qaddafi had fled to Venezuela, citing “credible Western intelligence sources.“

Of course, evidence that Qaddafi has been “attacking civilians” has not yet been produced in any shape form or way with US Department of Defense’s Robert Gates and Admiral Mullen in fact, both confirming “We’ve seen no confirmation whatsoever.” Additionally, BBC made an apparently little read footnote that their reports were impossible to verify.

BBC states in their article “The difficulty of reporting from inside Libya:” “The BBC and other news organisations are relying on those on the ground to tell us what’s happening. Their phone accounts – often accompanied by the sound or gunfire and mortars – are vivid. However, inevitably, it means we cannot independently verify the accounts coming out of Libya. That’s why we don’t present such accounts as “fact” – they are “claims” or “allegations”.”

Apparently “claims” and “allegations” are all the UN needed to rubber stamp yet another globalist war of conquest as they continue to sew together their one world government.

The Russian government went as far as bringing forth evidence that suggests such air strikes never even took place. As for the globalist-run media’s claims that Qaddafi fled to Venezuela, of course, Colonel Qaddafi is still obviously in Libya.

Even the globalist International Institute for Strategic Studies (IISS) made note in their 1 hour and 20 minute military briefing, that Libya’s Qaddafi was most likely going through extraordinary measures to avoid excessive civilian loses, so as to not play into the West’s desire for military intervention.

When the globalist policy wonks speak frankly, outside the short-attention
span of the general public, they talk of Qaddafi’s professional forces taking
special care to avoid civilian casualties knowing full well it will fuel calls for
Western intervention. (@16:26)

Now, the typical ploy of accusing besieged nations of using “human shields” is already being oafishly employed by the likes of the Independent in their article “Libya: The UN strikes back.” The very title itself is misleading, as the UN was merely a tool used to justify and authorize an otherwise unacceptable war the US and UK populations would have categorically refused to enter. The ability for the US to circumvent its constitution (Article I, Section 8, Clause 11) along with the will of the American people points the finger of “illegitimacy” toward the West at least as much as it is being pointed at Libya’s Qaddafi.

What can be confirmed?

What we can confirm, is that the entire Libyan rebel movement has been backed by the US and UK for nearly 3o years. We can confirm that the initial calls for a Libyan “Day of Rage” came not from the streets of Benghazi, but from the London based National Conference for Libyan Opposition (NCLO). We can confirm that NCLO leader Ibrahim Sahad was literally sitting in front of the White House giving an interview to the Western media in the opening stages of the Libyan unrest, parroting verbatim the West’s desire to militarily intervene with a no-fly zone.

We can also confirm that confessed terrorists like Noman Benotman, who had previously consorted with both the MI6 and Osama Bin Laden, are now offering their full support for the armed rebels in Libya. Ironically, Benotman’s support for armed militant rebels, including released Libyan Islamic Fighting Group (LIFG) members, manifests itself through the “Quilliam Foundation,” which was founded in part to disband and disavow armed militancy.

It is quite clear that the globalists had decided part of their US State Department sponsored “Arab Spring” would include removing Libya’s Qaddafi from power. No reality on the ground will prevent the globalists from achieving this goal, including the necessity to send troops on the ground if the current bombing and missile campaign fails to tip the balance in the Libyan rebels’ favor. The corporate owned media has descended to a new level of unprecedented, shameless propaganda to hammer their misshapen agenda into an ill-fitting reality. 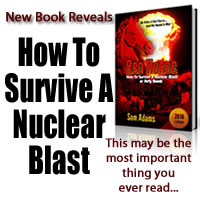 The globalist “international community” and mandate has never been more clearly illegitimate, squandered, and abused than it is now. While Japan suffers the worst catastrophe in its history, a catastrophe that includes the largest recorded earthquake in human history, a devastating tsunami and multiple nuclear meltdowns, the West pursues with the entirety of its resources, energy, and influence a war of profit and expansion in Libya – under the poorly dressed guise of “humanitarian concerns.” As it has been pointed out, such concerns are unverified and entirely based on what the BBC itself calls “allegations” and “claims.” Meanwhile, an irrefutable, unprecedented humanitarian disaster unfolds in northeastern Japan.

As if meddling in a foreign nation’s affairs based on a pack of lies isn’t bad enough, doing so when resources are desperately needed amidst a real disaster amounts to the zenith of criminal negligence. The West once again proves they are the greatest purveyors of crimes against humanity, through simultaneous action in Libya, and inaction in Japan.

Such irresponsible leadership, with such self-serving priorities that clearly leave the vast majority of humanity out in the cold does not deserve our respect, our obedience, or our support. Identify the corporate-financier oligarchs that make up this malicious self-appointed “global consensus” and put them out of business via a full-spectrum boycott and by replacing them permanently on a local level. While millions suffer in Japan and millions are in danger in Libya today, failing to strip these tyrants of their unwarranted influence will inevitably ensure the suffering and danger comes to you.

For more information on alternative economics, getting self-sufficient and moving on without the parasitic, incompetent, globalist oligarchs:

The Lost Key to Real Revolution
Boycott the Globalists
Alternative Economics
Self-Sufficiency
Tony Cartalucci’s articles have appeared on many alternative media websites, including his own at
Land Destroyer Report.

RELATED ARTICLE:
6 Reasons to Start WWIII If You Are a Globalist

Be the first to comment on "Libya: Another War, Another Pack of Lies"