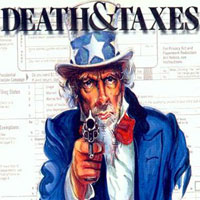 Many “philanthropic” foundations have been used in America as a tax dodge to protect family fortunes, to polish tarnished images of robber barons and worst of all, to make the public fund depopulation and other detrimental policies that benefit the controlling elite.  Some tax-funded depopulation programs include vaccines, genetically modified (GM) crops and “reproductive rights” which is a euphemism for abortion, birth control and sterilization under the elites’ eugenics programs.  Incredibly, the public is paying for its own demise!  This brings a whole new meaning to the phrase ‘death and taxes’.

What is a Foundation?
There are 1.6 million so-called ‘nonprofit’ 501(c)3 organizations in the US. Nonprofits are misnamed and are anything but not-for-profit; a more accurate description is that they are TAX EXEMPT organizations. The two two major types of tax exempt organizations are:

Foundations make grants to NPO “charities”.  Assets within foundations are not owned by individuals, but individuals control the assets.  Because they are allowed to continually re-invest assets without taxation, foundations are used to protect family wealth through estate planning; this scheme is now expanding into business development which means that some businesses are seeking to cut their taxes by pretending to be charitable organizations.

Foundations date back to Greek and Roman times.  They became popular with the elites in the U.S. when they created the fraudulent Federal Reserve System and the income tax.

How the Public Pays for its Own Demise
The formula for coercing the public to pick up the bill for destructive programs begins with foundations creating a constituency, buying off politicians, and convincing Congress that an issue should be regulated by the government.  Once the issue is government controlled, it becomes taxpayer funded.

A good example of this is man-made global warming, one of the cornerstones of UN Agenda 21, the overarching blueprint for total control and depopulation.  Fear and hysteria were created (based on flawed science from the UN) using NPOs in order to usher in government regulations funded by taxpayers.

Here is a more detailed explanation of the process:

Be the first to comment on "Foundations of Evil"