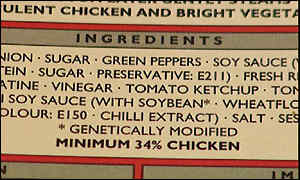 At this MSNBC poll, over 40,000 people have voted strongly in favor of labeling genetically modified foods: 96% of all respondents.

But, a review of several polls going back to 1994 reveals that the numbers have always been high — the vast majority of people have always wanted GM labels. That biotech foods have remained unlabeled for nearly 20 years in the US reveals a deliberate and willful refusal by regulatory agencies to serve the will of the people, instead opting to abet industry profits through public deception.

The 96% rating from MSNBC’s casual survey does represent a jump from a scientific poll conducted in 2003 by University of Maine and The Ohio State University (and partly funded by the US Dept. of Agriculture), where 85% of respondents said they wanted GM foods labeled. Researchers also noted:

“Polls have emphasized that a majority of consumers in the United States (US) desire GMFs to be labeled (Pew Initiative on Food and Biotechnology, 2001), and legislation has been entered at both the federal and state levels. For example, HR 3377 and S 2080—the “Genetically Engineered Food Right to Know Acts”—were introduced into the US House of Representatives and Senate, respectively. In addition, at least seven states have debated labeling and marketing requirements for GM foods (Pollack, 2001). Further, the current lack of harmonization of policies across countries also makes GM food labeling an international trade issue.”

More in line with that 2003 study, a few weeks ago, a CBS/New York Times poll found that 87% want GM foods labeled. This prompted food columnist Mark Bittman to ask, “Why Aren’t G.M.O. Foods Labeled?” He finds it “unbelievable … that the F.D.A. and the U.S.D.A. will not require any of these products, or foods containing them, to be labeled as genetically engineered, because they don’t want to ‘suggest or imply’ that these foods are ‘different.’”

But they are, Blanche, they are. That’s part of what goes into the difference between organic and not.

The European Commission on Agriculture reports that a full:

It should be no big surprise that since the introduction of GM foods, the majority of people want GM labeling. Who wouldn’t want to know how their food’s been adulterated? It’s simply a matter of ethics. Even if all the GMO naysayers are wrong and transgenic food (and the chemicals used to grow it) causes no harm to the biosphere, we have the right to know what’s in our food. We have the right to choose to eat what we want, and reject what we don’t want to eat.

More importantly, if governments fail to abide the wishes of free people who created them, does that not define tyranny?

Rady Ananda holds a B.S. in Natural Resources from The Ohio State University’s School of Agriculture.  Her work has appeared in several online and print publications. Using years of editorial experience and web publishing, Rady now promotes the ideas and work of a select group of quality writers and artists at Food Freedom and COTO Report.

Be the first to comment on "After 20 years, nearly everyone still wants GM food to be labeled"