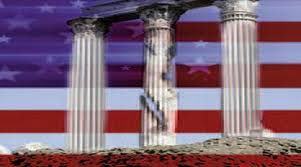 Just last week, it was reported that the turnout for the Democratic primary was the lowest in 80 years. While the Republicans are clearly energized by their concerns about the direction the Democrats are taking the country in, the Democrats themselves seem to have decided to forgo the voting process, perhaps in favor of a refreshing nap.

No question about it, the president is in the hot seat.

While I am sure that back in 2008 Barack Obama was one happy camper about having taken the presidential prize, today one has to wonder if that victory has led him to certain bitter regrets.

His problem, the problem bedeviling the government at its highest level, is that there is actually no palatable solution to the persistent debt crisis now gripping the U.S. economy by the throat.

In fact, the only tangible solution might be best termed the “Smoking Ruin Solution.” Allow me to elucidate.

The Keynesians would take great umbrage at the idea that the government is left with no viable options at this point. The solution is clear to them – more stimulus. And this time around, no skimping! A paltry $800 billion isn’t even going to begin to get the job done. Rather, if two trillion dollars of freshly minted money is what it takes to kick the U.S. economy out of its swoon, then so be it. Hell, make it three if that’s what it takes – we can worry about the (inflationary) consequences later.

Economists who look to someone other than Keynes for guidance, have other ideas – but not many. And, as per my comments above, none that would be even remotely palatable to the man on the street. That goes double for the politicians (of both parties), who rely on the proletariat to provide them with the votes that keep them in power and in porridge.

While I don’t have the time to scratch even a square inch of the surface of all the goofy solutions economists might trot out if asked, I will attempt to briefly address, in the broadest terms, a solution that might be considered acceptable to those who skew toward the Austrian school of economic thought.

For those of you unfamiliar with the Austrian perspective, it puts a large amount of faith in the unfettered free market, and almost none at all in the ability of governments to do much more than run economies headlong into solid walls.

I have to warn you, however, that the solution I am about to propose involves no quick fix or linking hands around the fire, accompanied by happy singing. Rather, it is more akin to treating a dread disease with a very strong medicine – so strong, in fact, that should the patient survive, they would (at least for some period of time) suffer a steep degradation in the quality of life.

I say that because the only real solutions available to the country are certain to result in financial carnage and social upheaval of a most extraordinary sort. For starters… Under my solution, the size and scope of government will have to be seriously reduced, a process best started by severely limiting the ability of politicians to make new regulations and pass new taxes or mandates. With relatively little to do – as opposed to the situation today, when literally nothing is beyond the interest and reach of the federal government – a wholesale purge of the bureaucracy can be undertaken.

Yes, that would mean hundreds of thousands of freshly dismissed bureaucrats, many of them possessing no real marketable skills, hitting the employment market. But look at the bright side, the oversupply of labor willing to work for subsistence pay will cause “guest” workers to throw up their hands and head to greener pastures, leaving the former bureaucrats to clean the sewers, collect the garbage, and pick the tobacco.

I can’t begin to count how many rich people I know who have lost essentially all their money due to bad investments or business decisions. Likewise, I know any number of wealthy people who started with little or nothing, but through hard work and enterprise made their mark and their money. The key to a robust economy is to make it as easy as possible for anyone to earn, and keep, the benefits of their efforts… and a reasonable flat tax goes a long way in that direction. As an added advantage, a flat tax would result in a wholesale shedding of accountants, lawyers, IRS employees, and more.

“But that will only add to unemployment,” you might fret (well, not you, but the person next to you). To which I would answer, rhetorically, by asking the question, “Is the desire to avoid such downsizing reason enough to keep the wasteful, counterproductive, and impossibly complex current tax system in place?” Hardly.

What the country needs now more than anything is transparency and the fostering of a solid foundation that allows businesses, and the entrepreneurs that start them, to do what they do best – create wealth.

I could give you other examples of the sort of steps and attendant mayhem that would result from slashing government and letting the free market run its course. But I’ll stop there, if for no other reason than that by now, I suspect, many readers are recoiling in horror at the inanity of the ideas just presented.

No question, these solutions would leave the economy in smoking ruins – in worse shape, even, than at the height of the Great Depression.

While the devil is invariably in the details, the argument for pulling the proverbial trigger on the smoking ruin solution is understandable – at least to me – by getting back to the positive outcomes that would result.

Such strong medicine would make the patient sick – and likely even cause reduced quality of life for some extended period of time. But I have to believe returning America to a foundation built on the principles of self-reliance and an individual’s right to the fruits of their labor would lead to a breathtaking groundswell of optimism and enterprise. Further, just as was the case in 1776, the U.S. would again provide a model for the rest of the world to follow, so the benefits would be global.

Of course, everything I just wrote would be considered almost criminally outrageous by most of the citizenry – and written off as the ravings of a madman by the politicians.

Which is why, in time, it will be the Keynesians’ arguments that win the day, and the next leg down will be met by a wave of newly printed funny money – a veritable flood of the stuff. Certainly not before the November elections, and certainly not before the threat of a deflationary collapse provides the cover the government needs to act – but it’s coming.

Gold still seems a safe bet to this observer.

And everything gold is what Casey’s Gold & Resource Report specializes in… covering topics like: When and where should you buy gold coins and bars – and how much of your portfolio should you allocate to gold? What are the best gold-related investments that can protect your wealth and provide up to 4:1 leverage to the physical metal? All that for only $39 per year – with 3-month money-back guarantee. Read more here.

Be the first to comment on "The Smoking Ruin Solution"