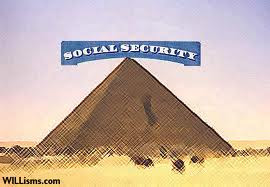 No discussion of the upcoming collapse of the bond market would be complete without a mention of Social Security.

At least, after they’ve lost their money in stocks, real estate and bonds, Americans will at least have Social Security to live on, right? Wrong!
You know all that money you pay in Social Security taxes? Where do you think it goes? Into current expenses and US bonds!
That’s right, the feds just use the money to finance whatever fool scheme they’ve got going at the moment…and give the Social Security Administration a bond in return. In theory, the SSA has assets. In practice, all they’ve got is the hope that the feds can squeeze enough money out of taxpayers to meet their obligations.
Professor Laurence Kotlikoff:

Social Security has also played a central role in the massive, six-decade Ponzi scheme known as US fiscal policy, which transfers ever-larger sums from the young to the old.

In so doing, Uncle Sam has assured successive young contributors that they would have their turn, in retirement, to get back much more than they put in. But all chain letters end, and the US’s is now collapsing.

RELATED ARTICLE:
Banksters Are Coming For Your Retirement Next

Be the first to comment on "Social Security: The futile fight for what’s been promised"