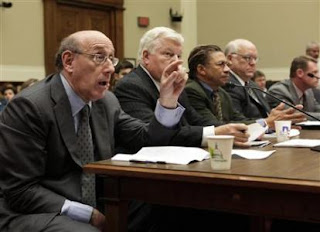 A flower shop in Florida that saw a drop-off in weddings this summer is probably out of luck. So is a restaurant in Idaho that had to switch seafood suppliers. A hardware store on the Mississippi coast may be left out, too.

The latest guidelines for BP’s $20 billion victims compensation fund say the nearer you are geographically to the oil spill and the more closely you depend on the Gulf of Mexico’s natural resources, the better chance you have of getting a share of the money.
Also, a second set of rules expected this fall will require that businesses and individuals seeking compensation for long-term losses give up their right to sueBP and other spill-related companies—something that could save the oil giant billions.
The new rules for the claims process were released Friday by Washington lawyer Kenneth Feinberg, who was picked by President Barack Obama to run the fund and previously oversaw claims for 9/11 victims. Beginning Monday, the claims will be handled by Feinberg rather than BP, which is still footing the entire $20 billion bill.

Who gets paid and who doesn’t will depend largely on how much proof there is that losses were caused by the spill and not by something else, such as the recession. Feinberg’s guidelines say key factors include a claimant’s geographic proximity to the disaster and how much the business or property is linked to “injured natural resources.”

Feinberg elaborated on his reasoning during town meetings this week in Louisiana.
“How close are you to the beach? To the Gulf? BP got claims from restaurants in Idaho. Go figure,” he said. “How close are you? That’s a major factor. How dependent are you, as an individual or a business, on the resources of the Gulf?”
That worries business owners like Susan Mitchell, who runs a flower shopabout a mile from Pensacola Beach, Fla., where tarballs from the spill washed up. She said her business was down about $4,000 this year in July from the year before.
“But it is hard to prove exactly why that is and everyone keeps telling us we have to prove that it was because of the oil,” she said. “We usually have beach weddings all summer. We deliver to hotels with people having birthday partiesand celebrations on the beach.”
Jeffrey Breit, a Virginia-based lawyer who represents more than 600 Gulf Coast fishermen, said the geographic limitations will certainly cut out many deserving claimants.
“I think it’s unfair to draw arbitrary geographic lines when it is clear that many businesses rely on the natural resources of the Gulf for their livelihoods,” Breit said.
The new rules govern emergency claims that can be made between Monday and Nov. 23 at Gulf Coast claims offices, by mail or through the Internet. Feinberg said his goal is to issue emergency checks within 24 hours for individuals and seven days for businesses. Many people have complained about the sluggish BP process.
The attorneys general of Alabama and Florida sent Feinberg letters objecting to many of the new rules. Florida’s Bill McCollum said people will face a much heavier burden of proof trying to show the spill caused their losses.
“The current process appears to be even less generous to Floridians than the BP process,” McCollum wrote. “Such an outcome is completely unacceptable.”
Those seeking emergency payments will not have to give up their right to sue BP and other companies. But the rules for final, long-term settlements will include a waiver of that right.

That drew protests Friday from a leading trial lawyers group, the American Association for Justice, which said the rule could force claimants to decide whether to accept a BP payment or go to court before the full extent of the damage is known. For example, attorneys said, there could be health effects that take years to develop, or environmental damage that might not surface for years.
“BP is trying to cut off damages. They realize that small payments will be grabbed by some, and then in the future they will have no access to justice,” said Jere Beasley, a Montgomery, Ala., lawyer who is representing oil spill clients. “Which is sad, but true.”
But many people might choose to file a claim because lawsuits can drag on for years and because attorneys often take one-third of any damages as their fee.
Already more than 300 lawsuits have been filed against BP and other companies involved in the disaster, which began April 20 with an explosion aboard an offshore oil rig that killed 11 workers.
At Diamondhead, Miss., along the Gulf Coast, Don Farrar, owner of Diamond Ace Hardware and Diamondhead Florist, said he has received two checks fromBP for thousands of dollars but is worried what will happen when the claims process changes hands. He said the spill’s economic toll has reached far beyond fishermen and tourist businesses.
“I have a hardware store and a florist. Even my florist is down,” he said. “When a fishermen is not making money, he’s not going to be buying a house, he’s not going to be painting his house, and he’s not going to be buying paint from me.”
____
Associated Press writers Melissa Nelson in Pensacola, Fla., Mary Foster andKevin McGill in New Orleans, Holbrook Mohr in Jackson, Miss., and Jay Reeves in Birmingham, Ala., contributed to this story.