For nations not willing to risk direct military involvement in Ukraine, Technocrats sending advanced robot technology instead makes for a perfect experimental lab to test things without risking the lives of their own soldiers. — Technocracy News & Trends Editor Patrick Wood

By: Tristan Green via The Next Web

The war in Ukraine has become the largest testing ground for artificial intelligence-powered autonomous and uncrewed vehicles in history. While the use of military robots is nothing new — World War II saw the birth of remote-controlled war machines and the US has deployed fully-autonomous assault drones as recently as 2020 — what we’re seeing in Ukraine is the proliferation of a new class of combat vehicle.

This article discusses the “killer robot” technology being used by both sides in Russia’s war in Ukraine. Our main takeaway is that the “killer” part of “killer robots” doesn’t apply here. Read on to find out why.

This war represents the first usage of the modern class of uncrewed vehicles and automated weapons platforms in a protracted invasion involving forces with relatively similar tech. While Russia’s military appears, on paper, to be superior to Ukraine’s, the two sides have fielded forces with similar capabilities. Compared to forces Russia faced during its involvement in the Syrian civil war or, for example, those faced by the US during the Iraq and Afghanistan engagements, what’s happening on the ground in Ukraine right now demonstrates a more paralleled engagement theater.

It’s important, however, to mention that this is not a war being fought by machines. It’s unlikely that autonomous or uncrewed weapons and vehicles will have much impact in the war, simply because they’re untested and, currently, unreliable.

Uncrewed vehicles and autonomous vehicles aren’t necessarily the same thing. While almost all autonomous vehicles — those which can operate without human intervention — are uncrewed, many uncrewed vehicles can only be operated remotely by humans. Perhaps most importantly, many of these vehicles have never been tested in combat. This means that they’re more likely to be used in “support” roles than as autonomous combat vehicles, even if that’s what they were designed to do. 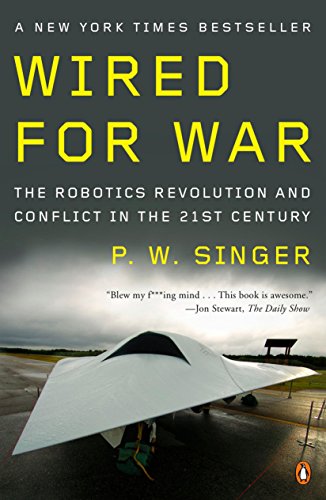 Wired for War: The Robotics Revolution and Conflict in the 21st Century

But, before we get into the hows and whys behind the usage of military robots in modern warfare, we need to explain what kind of vehicles are currently in use. There are no “killer robots” in warfare. That’s a catch-all term used to describe military vehicles both autonomous and uncrewed.

So, the first question we have to answer is: why not just turn the robots into killers and let them fight the war for us? You might be surprised to learn that the answer has very little to do with regulations or rules regarding the use of “killer robots.”

To put it simply: militaries have better things to do with their robots than just sending fire downrange. That doesn’t mean they won’t be tested that way, there’s already evidence that’s happened.