Here we go again. Every few years in Congress there is a purely political battle over the debt ceiling. We’re supposed to be horrified and worried that the US might default on some of its debt. Some commentators will insist the US has never defaulted, and that default be a disaster. (That’s wrong, by the way. The US has defaulted before.)

But these debt ceiling debates always end the same way. Congress ends up increasing the debt ceiling and the US’s national debt continues to spiral upward.

During all the theatrics over the debt ceiling, however, many strange ideas are put forward as a supposed means to avoiding a shutdown. One of these is the “trillion-dollar coin” idea. The general premise is that the government can do an end run around the debt ceiling altogether if it can find a way to raise revenue without borrowing. Thus, the scheme goes more or less like this, as explained by Yale law professor Jack Balkin back in 2011:

Are there other ways for the president to raise money besides borrowing?

Sovereign governments such as the United States can print new money. However, there’s a statutory limit to the amount of paper currency that can be in circulation at any one time.

Ironically, there’s no similar limit on the amount of coinage. A little-known statute gives the secretary of the Treasury the authority to issue platinum coins in any denomination. So some commentators have suggested that the Treasury create two $1 trillion coins, deposit them in its account in the Federal Reserve and write checks on the proceeds….

The “jumbo coin” [strategy works] because modern central banks don’t have to print bills or float debt to create new money; they just add money to their customers’ checking accounts.

Put another way, by minting a trillion-dollar coin, Congress could simply deposit the coin at its bank account at the Federal Reserve and then start spending money from the account which now has a trillion-dollar (or even larger) credit.

But here’s the rub: in no version of this scheme is the trillion-dollar coin actually made with a trillion-dollars-worth of platinum. Were that the case, the “coin” would be huge and weigh millions of pounds. Rather, the coin we’re talking about in this scheme would just have a face value of $1 trillion. It would be a commemorative or numismatic coin. The coin would be nothing more than a kind of legal fiction that’s used to credit the Treasury with a trillion dollars without going deeper into debt.

So, there’s really no reason for there to be any platinum in the coin at all, except for the legal (and perhaps political) advantages of calling it a platinum coin. From an economic standpoint, the coin might as well be a paperclip, as explained by Robert Murphy:

The Federal Reserve has the power to buy whatever assets it wants at whatever price it wants. In principle, [the Treasury Secretary] could sell a paperclip to the Fed for $2 trillion. The Fed would simply write a check made out to the Treasury, drawn on the Fed itself.

When the Treasury deposited this check with its own bank — which just so happens to be the Fed — then its own “checking account” balance would go up by $2 trillion. This money wouldn’t come from anywhere in the sense that some other account would need to be debited $2 trillion. On the contrary, the system’s total reserves (and what is called the “monetary base”) would have swelled by $2 trillion. The Treasury would be free to start paying bills by writing checks on the $2 trillion in its account.

The only kink in the plan would be the state of the Fed’s balance sheet. Initially it could value the paperclip at $2 trillion — what the Fed paid for it — and list the paperclip among its other assets such as Treasury bonds and mortgage-backed securities.

It seems absurd, but the difference between the paperclip idea and the trillion-dollar coin scheme is one merely of degree. Both are ways of depositing something of relatively small value into a bank account and then withdrawing sums of money far exceeding the value of what was deposited.

Two Ways of Taxing the Public

But what is the difference between the usual raise-the-debt-ceiling option and the paperclip/coin idea? Perhaps the most meaningful difference between them is the way in which the taxpayers are exploited to pay for more government spending. Were the government to simply go more deeply into debt, the government would sell bonds and get cash in return. The bonds would be added to the national debt, formally increasing both the future and present obligations of the taxpayers. Taxpayers would be on the hook for paying off the bonds at the maturity date at some point in the future, but would also be on the hook in the near term for paying interest on the new debt.

In the case of the trillion-dollar coin, however, the taxpayer is exploited via the inflation tax. The coin scheme essentially forces the Federal Reverse to credit the Treasury with money and resources that doesn’t exist. The scheme ends, as Murphy notes above, by expanding the money supply—i.e., “printing” money.

The result of this inflating the money supply is either rising asset prices or rising consumer prices, or both. For example, we’re already living with 40-year highs in price inflation which is the consequence of the massive amounts of monetary inflation that occurred since 2008—and especially since 2020.

Admittedly, the trillion-dollar coin idea is good for the government itself. It provides the regime with yet another option for quickly accessing and spending even more money. But for taxpayers, there’s nothing beneficial or special about the coin scheme. It’s just a different way of ripping us off. 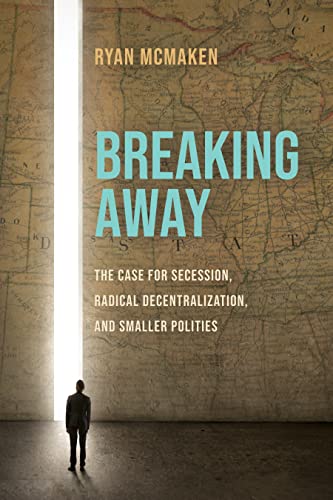 Breaking Away: The Case for Secession, Radical Decentralization, and Smaller Polities by Ryan McMaken