So…it turns out we crazy conspiracy theorists aren’t so crazy after all. Again. Elon Musk has allowed the curtain to be pulled back on Twitter to reveal corruption, collusion, and straight-up propaganda that have changed the course of American history. Musk is catching all sorts of flack for the Twitter Files from the mainstream media, who are somehow trying to defend the indefensible actions that have taken place behind the scenes and paint Musk as the bad guy for exposing it.

Many things that non-liberals have been saying for years have been shown to be true. There was indeed collusion between the Biden campaign and Twitter, conservatives were absolutely shadowbanned, the FBI is involved in social media, and points-of-view that were not in line with the narrative were suppressed by the social media giant.

Elon Musk has provided journalists like Matt Taibbi, Bari Weiss, Lee Fang, and Michael Schellenberger access to years of internal documents and chat logs showing the trend of biased moderation behind the scenes. (You can sift through Musk’s own Twitter account to read these reveals yourself.)

It’s a story of censorship cloaked as moderation and political bias cloaked as safety. Favors were done, and stories were either suppressed or allowed to trend based on the whims of a handful of people behind the scenes. Regardless of how many times the MSM says “alleged” in conjunction with these revelations, it’s very clear that there’s a real problem.

And keep in mind this is only the tip of the iceberg. I’d be willing to bet everything I have that similar conversations have gone on behind the scenes at Google and Facebook too. That means that Big Tech has been responsible for illicitly influencing the course of history, something we here at The Organic Prepper have been saying for a decade. While you personally may not have been influenced by things on social media, the people around you have been and the consensuses that were formed in America were based on biased information.

That’s a real problem. Propaganda works and the position our country is in shows the heinous aftermath of it. 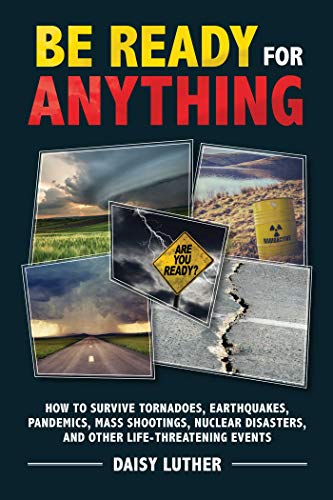 Be Ready for Anything: How to Survive Tornadoes, Earthquakes, Pandemics, Mass Shootings, Nuclear Disasters, and Other Life-Threatening Events by Daisy Luther

Here’s what we learned from the Twitter Files so far.

The best synopsis I’ve seen of the Twitter Files comes from the account of journalist Benjamin Carlson. Carlson wrote, “No agency should be unaccountable. No institution is indispensable.”

What is the real story of the Twitter Files? It’s a much bigger deal than many realize.

Here are 7 crucial takeaways everyone needs to know:

1. History changed because of this:

You may agree with each decision. But there is no denying that halting information flow and free debate had real consequences.

3. Censorship is being cloaked in the language of safety:

4. The government is policing opinion:

•Twitter execs repeatedly and publicly denied shadow bans
•In reality, bans were in place as “visibility filtering”
•Ultimately, no accountability to public

6. Free speech is controlled by a small group:

•Biggest decisions in Twitter Files made by 3-4 individuals
•Despite misgivings and doubts, once made, decisions stuck
•Now it’s Musk.

One difference: his embrace of public polls to set policy.

7. The slippery slope is real:

This is how you get Billy Baldwin in the crosshairs.

Once you silence a president, who has a right to speak?

8. Musk has made enemies:

I expect his businesses will see counterattacks. Now is a good time to refocus—and let the users decide how to uphold free speech. 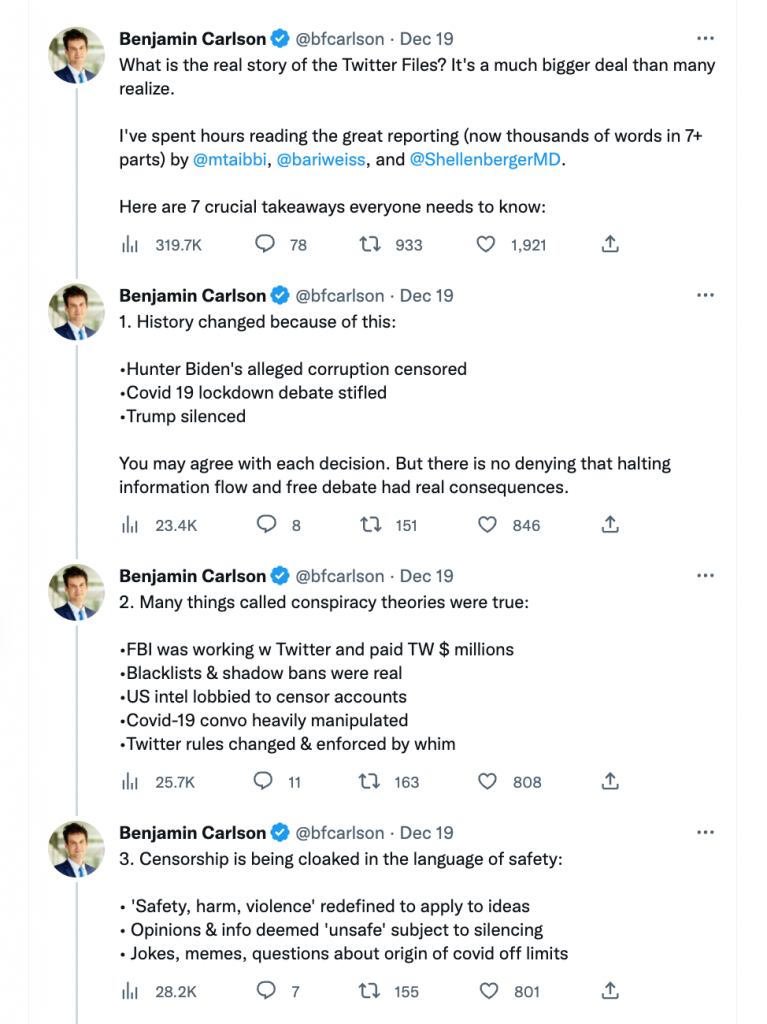 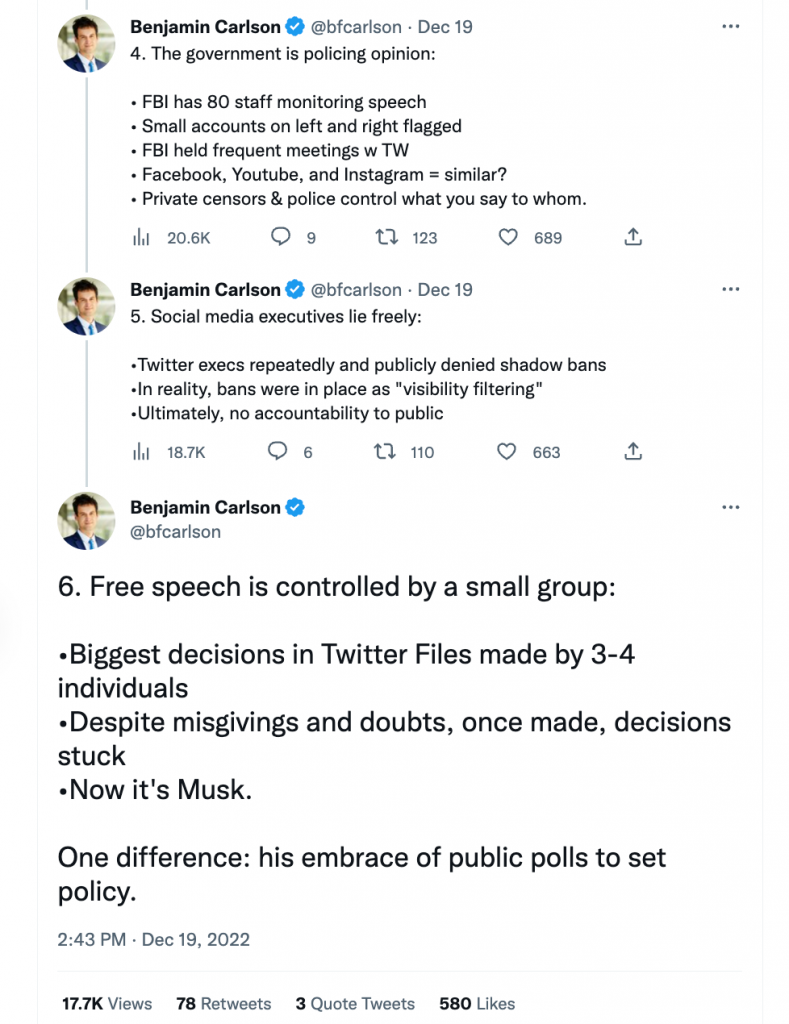 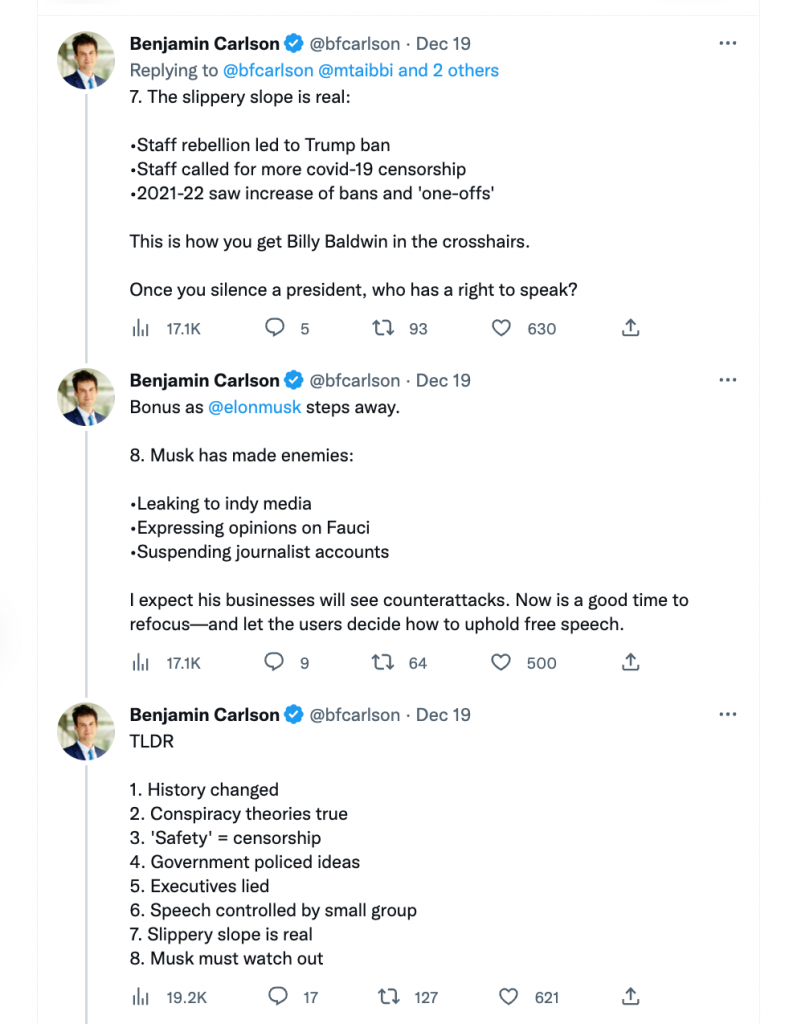 The MSM is outraged.

Unsurprisingly, those who have been shown to be biased and corrupt are displeased and the MSM is leaping to their defense and attacking Musk for using his platform to expose it.

Twitter’s new owner, Elon Musk, is feverishly promoting his “Twitter Files”: selected internal communications from the company, laboriously tweeted out by sympathetic amanuenses. But Musk’s obvious conviction that he has released some partisan kraken is mistaken — far from conspiracy or systemic abuse, the files are a valuable peek behind the curtain of moderation at scale, hinting at the Sisyphean labors undertaken by every social media platform.

Vanity Fair dismisses the claims in the Twitter Files and focuses its wrath on Musk.

Right-wingers are reveling in the latest batch of Elon Musk’s Twitter Files, which Republicans continue to dubiously frame as bombshell revelations into the platform’s squelching of far-right accounts. But amid all the brouhaha, a simple question remains: What new information has actually emerged from these splashy document dumps?

…All that can be gleaned from the latest Twitter Files release is this: Musk, likely under pressure from spooked advertisers to justify his conservative rebrand of the company, wants everyone to know that at least a few right-wing users were sent to varying degrees of Twitter time-out.

The Intelligencer is equally dismissive and but far more sarcastic as they strive to discredit Musk.

..the Twitter Files are best understood as an egregious example of the very phenomenon it purports to condemn — that of social-media managers leveraging their platforms for partisan ends…

…The Twitter Files provide limited evidence that the social-media platform’s former management sometimes enforced its terms of service in inconsistent and politically biased ways. The project offers overwhelming evidence that Twitter’s current management is using the platform to promote tendentious, partisan narratives and conservative misinformation. In that sense, Taibbi and Weiss have performed revelatory journalism.

NPR suggests that Musk is a big, mean bully.

Musk’s conspiracy-baiting has quickly turned ugly, as he uses a project that purports to be about transparency to discredit Twitter’s former leadership and harass people he disagrees with. That’s giving his 120 million Twitter followers easy targets…

…many tech journalists, social media experts and former Twitter employees say Musk’s claims are over-hyped, given that the documents shared so far largely corroborate what is already known about the messy business of policing a large social network.

“What is really coming through in the Twitter Files for me is: people who are confronting high-stakes, unanticipated events and trying to figure out what policies apply and how,” said Renée DiResta, research manager at the Stanford Internet Observatory, who studies how narratives spread on social networks…

…But with his drumbeat of Twitter Files releases and gleeful tweets dunking on the company’s former employees, Musk has successfully hijacked the conversation.

“It is being processed as punitive and sort of owning the last regime, as opposed to saying, ‘Here are things that we can see in these files and here is how it’s going to be done differently under our watch,’” DiResta said.

I suppose the bottom line here is that when faced with one set of facts, people with different philosophies will always draw diverse and strongly held conclusions.

What do you think of the revelations from the Twitter Files?

Okay, it’s your turn! Have you been following the Twitter Files? (You don’t have to have a social media account to do this, by the way. These posts are publicly available.)
Do you find the revelations underwhelming? Or do you feel vindicated? What was the most surprising thing you’ve learned thus far? Let’s discuss it in the comments.