The US Drug Enforcement Agency (DEA) is a colossal institutional failure. Since its founding in 1973, the DEA has intercepted a fraction of one percent of illicit drug trades. Drugs have never been stronger, cheaper, or more available. Meanwhile, the global economic and human costs of ‘enforcement’ keep rising.

Recently, Americans received a stark reminder of this ongoing, flagrant failure in the form of José Irizarry, a former award-winning DEA agent who was convicted of 19 counts of corruption and fraud in 2020. On his way to serve federal time in Puerto Rico in January 2022, Irizarry spoke to the Associated press, calling out his ex-colleagues and spilling a few agency secrets.

“You can’t win an unwinnable war. DEA knows this and the agents know this,” Irizarry told reporters, validating decades of criticism. “…We know we’re not making a difference.”

While some money and effort was spent intercepting, or at least tracking, drugs and money between the 69 countries in which DEA has a presence, what were agents up to on the taxpayer dime?

Irizarry told the AP that dozens of other federal agents, prosecutors, smugglers, and snitches on the US payroll (collectively known as “Team America”) engaged in global jetset adventures on the DEA’s dime. Irizarry estimates 90 percent of his group’s work trips were “bogus” (not related to any drug interdiction work) but that the US government was charged under the vague justification that travel was “case-related.”

Agents falsified the few reports they did file, skimmed massive amounts of drugs and cash from sting operations, and set up meetings in cities simply to attend elite soccer and tennis matches. As long as Team America could report “stats” that made the DEA look good, no one questioned what they were up to. Another two dozen agents are under related investigations, according to the AP.

Irizarry’s accusations are the subject of ongoing internal investigations, but they are hardly the first concerns raised about corrupt behavior by DEA agents. In 2015, the Justice Department and the Associated Press confirmed agents participated in sexual encounters with prostitutes employed by Columbian drug cartels, in their government-leased living quarters, no less. 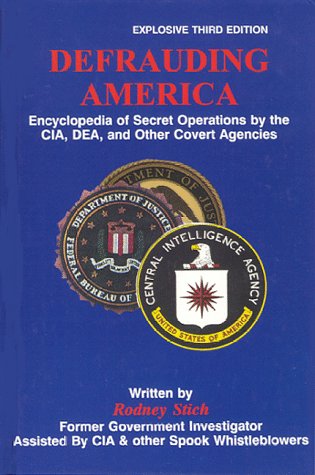 Defrauding America: Encyclopedia of Secret Operations by the CIA, DEA, and Other Covert Agencies

DEA agents have been convicted of smuggling narcotics themselves, and taking bribes to look the other way while criminal enterprises did the same. A 2020 report by the Inspector General identified dozens of operations in which DEA personnel laundered millions of dollars through shell companies, an approved tactic that empowers cartels and allows significant sums to be diverted for agents’ personal lavish living. For at least 15 years, DEA hadn’t even bothered filing reports on these income-generating undercover schemes.

The DEA’s budget of $3 billion is counted among an estimated total cost of enforcement estimated at $100 billion, including $25.7 billion in state and local funds, often from cash-strapped communities whose needs are far more immediate.

But the costs are not limited to bloated and wasted budgets. Five Nobel Laureates in Economics have called for an end to the drug war, citing the policy’s failure to achieve its objectives of reducing the supply or demand for drugs, as well as its diversion of funds from public health and other responses that might genuinely save lives.

A multidisciplinary report titled “Counting the Cost” attempts to quantify the failure: “Despite increased resources directed to supply-side enforcement, evidence suggests that drug prices, while remaining far higher than legal commodities, have decreased over the past three decades. From 1990 to 2005, for instance, the wholesale price of heroin fell by 77 percent in Europe and 71 percent in the US.”

In remarks recorded by a DEA-employed infiltrator, Mexican cartel bigwig Jorge Roman said traffickers were grateful for the drug war, which he called “a sham put on the American tax-payer” that was “actually good for business.”

What’s good for violent drug cartels is good for the DEA, but bad for the rest of the human race. DEA agents are immersed in a violent and shady world, largely subsidized by US taxpayers and through theft via asset forfeiture. DEA agents have tortured and murdered innocent people who happened to be near drug activity. The DEA’s punitive prohibition of cocaine precipitated the spread of crack. The DEA’s misguided attempts to reduce opiate misuse fueled an overdose epidemic.

“DEA is a game. Drug war is a game,” Irizzary told the AP when interviewed. “It was a very fun game that we were playing.”

That game might be fun, and lucrative, for federal enforcers and other drug-trade insiders. But the DEA’s game makes the rest of humanity its losers.

Be the first to comment on "DEA Whistleblower Claims Mass Fraud and Corruption. Is Anyone Surprised?"