During the Trump administration, the FBI paid $5 million to an Israeli software company for a license to use its “zero-click” surveillance software called Pegasus. Zero-click refers to software that can download the contents of a target’s computer or mobile device without the need for tricking the target into clicking on it. The FBI operated the software from a warehouse in New Jersey.

Before revealing any of this to the two congressional intelligence committees to which the FBI reports, it experimented with the software. The experiments apparently consisted of testing Pegasus by spying – illegally and unconstitutionally since no judicially issued search warrant had authorized the use of Pegasus – on unwitting Americans by downloading data from their devices.

When congressional investigators got wind of these experiments, the Senate Intelligence Committee summoned FBI Director Christopher Wray to testify in secret about the acquisition and use of Pegasus, and he did so in December 2021. He told the mostly pliant senators that the FBI only purchased Pegasus “to be able to figure out how bad guys could use it.” Is that even believable?

In follow-up testimony in March 2022, Wray elaborated that Pegasus was used “as part of our routine responsibilities to evaluate technologies that are out there, not just from a perspective of could they be used someday legally, but also, more important, what are the security concerns raised by those products.” More FBI gibberish.

Last week, dozens of internal FBI memos and court records told a different story – a story that has caused Sen. Ron Wyden, Democrat of Oregon and a member of the Senate Intelligence Committee, to question the veracity of Wray’s testimony. Wyden’s healthy skepticism caused the FBI reluctantly to reveal that it had ordered its own version of Pegasus, called Phantom, which the Israelis tailor-made for hacking American mobile devices.

Here is the backstory.

The Fourth Amendment to the Constitution was written to preserve the natural right to privacy and to cause law enforcement to focus on crimes, not surveillance. The instrument of these purposes is the requirement of a judicially issued search warrant before the government can engage in any surveillance.

A search warrant can only be issued based on probable cause of crime demonstrated under oath to the issuing judge and a showing that the place to be searched or person or thing to be seized is more likely than not to reveal evidence of crime. As well, the warrant must specifically describe the place to be searched and things to be seized. Warrants can only be issued for investigations of actual crimes that have already occurred, not for experiments.

The Fourth Amendment contains some of the most precise language in the Constitution, as it was written intentionally to thwart the rapacious appetite of governments to snoop, which the British did to the colonists using general warrants.

General warrants were not based on probable cause of crime and lacked all specificity. Rather, they were based on government need – a totalitarian standard because whatever the government wants it will claim it needs – and they authorized the bearer to search wherever he wished and seize whatever he found. 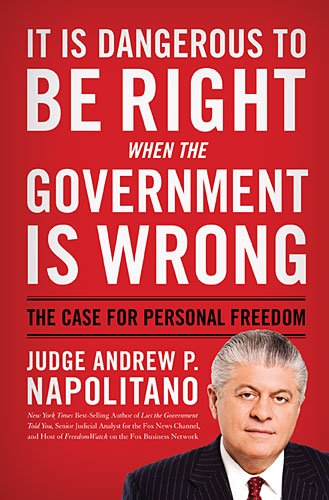 It Is Dangerous to Be Right When the Government Is Wrong: The Case for Personal Freedom

The Fourth Amendment was intended to put a stop to general warrants. As we know from the wildly unconstitutional FISA court and the NSA’s secret criminal spying on all Americans, that amendment, like much of the Constitution, has failed abysmally to restrain the government.

Now back to the FBI and Phantom.

In July 2021, President Joseph Biden personally put a stop to the FBI’s use of Phantom, and the congressional intelligence committees assumed that that was the end of it.

Yet, last week, when reporters revealed the results of Freedom of Information Act requests for memos and court documents pertaining to Phantom, a different story emerged. The documents that the FBI furnished show a vast determination by FBI management to showcase and deploy Phantom to FBI agents and other federal law enforcement personnel.

The procedures under which the House and Senate Intelligence Committees operate require that secrets be kept secret. Thus, when the FBI director testifies before those committees, the representatives and senators who hear the testimony may not reveal what they heard to the press or even to their congressional colleagues. Wyden has apparently had enough of law enforcement deception and secrecy. Hence his complaints in letters to Wray – letters that more or less tell us what’s going on.

All of this leaves us with an FBI out of control and run by a director who has been credibly accused of misleading Congress while under oath – a felony – and whose agents have been credibly accused of conspiracy to engage in computer hacking – also a felony. Who knows what other liberty-assaulting widgets the FBI has in its unconstitutional toolbox about which Wyden and his investigators have yet to learn?

When Daniel Ellsberg courageously removed the Pentagon Papers from his office and gave them to reporters from The New York Times and The Washington Post, he was charged with espionage. The papers revealed that Pentagon generals were lying to President Lyndon B. Johnson and Johnson was lying to the public about the Vietnam war.

During Ellsberg’s trial, FBI agents broke into the office of his psychiatrist and stole his medical records so as to use them at the trial. The federal judge presiding at the trial was so outraged at the FBI’s misconduct that he dismissed the indictment against Ellsberg, and the government did not appeal the dismissal.

The Ellsberg break-in took the FBI a few hours and was destructive and dangerous.

Today’s FBI could have done the Ellsberg heist remotely in a few minutes. Today’s FBI has agents who are the bad guys they have warned us about. Today’s FBI has morphed from crime fighting to crime anticipating. Today’s FBI is effectively a domestic spying operation nowhere sanctioned in the Constitution. It should be defunded and disbanded.

Be the first to comment on "The FBI and Zero-Click"