To a Technocrat, efficiency is like catnip is to a cat – it cannot be resisted even to the point of creating automated killing machines. Why get your hands dirty, anyway? And if you make a mistake and kill the wrong person? Well, just write that off to occasional collateral damage or friendly fire. This arms race cannot be stopped at this point. — Technocracy News & Trends Editor Patrick Wood

A new drone from Israel’s Elbit Systems called Lanius combines a number of technologies that put it at the forefront of how drones are transforming war.

At the same time, reports about the drone may raise questions about how this technology may make war more controversial as “robots” play a larger role in it.

The more armies and defense companies invest in new technology that enables combat to take place remotely — without soldiers interacting with civilians, for instance — the more it seems like “robot wars.”

Elbit Systems has said that Lanius is “part of the Legion-X robotic and autonomous combat solution.” Elbit is one of Israel’s three largest defense companies and is at the forefront of defense technology.

Its website says the drone “is a highly maneuverable and versatile drone-based loitering munition designed for short-range operation in the urban environment.”

The drone can scout and map buildings, flying around small corridors and through doorways. This means it can help a user find “points of interest for possible threats, detecting, classifying and syncing to Elbit Systems’ Legion-X solutions. Lanius can carry lethal or non-lethal payloads, capable of performing a broad spectrum of mission profiles for special forces, military, law enforcement, and HLS.” 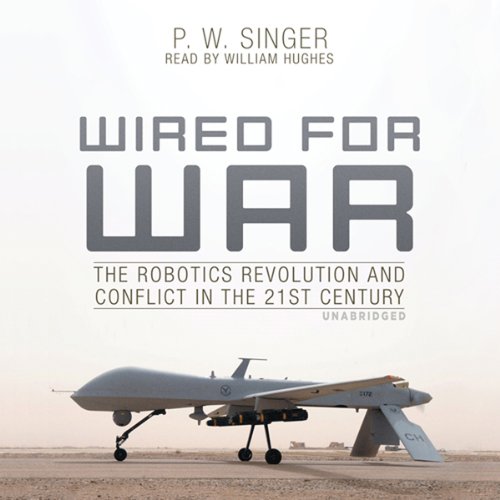 Wired for War: The Robotics Revolution and Conflict in the 21st Century

The small drone has an interesting appearance that differentiates it from the other types of small quadcopter-style drones. While it uses small rotors, it also has a large bug-like head full of optics, presumably helping it “see” better and aiding it in missions that involve mapping indoors.

Quadcopter drones were developed for commercial use but militaries have quickly adapted these small “tactical” style drones for use with troops in the field.

Usually, small drones don’t have a long range and they can’t operate for long periods. However, as militaries adopt them they must be ruggedized and be able to operate in heat and cold, unlike their commercial cousins that may overheat easily in a desert environment.

Once militaries and defense companies got around the intrinsic problem that these drones could be easily damaged, such as when rotors run into branches of trees, the issue became how to make them not only survive missions but also do what soldiers need them to do.

THE LANIUS has both surveillance and “attack” capabilities, another added function that modern drones need.