While investors continue to await a possible Federal Reserve pivot toward monetary easing, the pivot has already occurred in major asset markets, including precious metals.

The collapse of major cryptocurrency exchange FTX could lead to the demise of other platforms and the digital tokens that trade on them.

Despite the crypto carnage, the U.S. stock market put in one of its best weeks since coming off the 2020 pandemic bottom. The battered bond market also showed signs of potentially reaching a major turning point.

The Federal Reserve Note dollar, which had been showing relentless strength versus foreign currencies all year into October, suffered a major technical breakdown last week. This may be the most important chart of the moment: 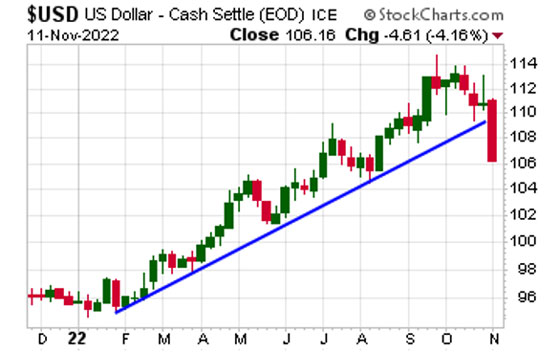 The uptrend for the U.S. Dollar Index appears to have ended in dramatic fashion.

As the fiat currency suffered its worst weekly pounding of the year, the gold market experienced its best weekly gain – advancing 5.3% to a three-month high of $1,779/oz.

Traders are betting that the Fed’s resolve to fight the inflation it created has peaked.

Central bankers have finally achieved a small deceleration in price level increases, with the latest Consumer Price Index coming in at 7.7% annualized – still dramatically above target but below the worst levels seen earlier in the year.

Fed officials are also likely alarmed by recent signs of trouble in the housing market and reports of large corporations laying off thousands of employees.

The warning signs of a severe economic downturn in 2023 are building, and by this time next year the Fed could be aggressively cutting rates to try to dig the economy out of recession.

Such a scenario would imply a continued decline in the dollar’s exchange rate over the next year – and potentially a big run up in gold and silver prices.

A precious metals bull market could also be bolstered by a flight from collapsing crypto-related assets.

Cryptocurrency promoters have specifically touted their digital tokens as being superior to gold.

For example, Grayscale began running expensive television commercials in early 2019 urging investors to “drop gold” and buy its exchange-traded Bitcoin instrument. Since then, however, Bitcoin has dropped in value while gold has gained.

Nobody knows whether cryptocurrencies will ever return to their glory days after having lost 75%-100% of their market value since peaking. But for a large number of crypto holders, it’s now starting to sink in that they were sold on hype rather than substance.

Many folks fell for celebrity-endorsed crypto pitches that turned out to be “pump and dump” schemes.

They believed that fast-talking crypto entrepreneurs like disgraced FTX owner Sam Bankman-Fried were the real deal. After all, his confidence game worked to convince members of Congress, mainstream financial journalists, and professional sports leagues that his operation was sound… until, suddenly, everyone lost confidence all at once.

The only currency that doesn’t depend on confidence in promises made by individuals, institutions, or governments is physical gold (and silver).