Americans are moving to Mexico at the highest pace since the stats first became available in 2010 — with requests for temporary-resident status skyrocketing 85% above 2019 levels.

Mexico granted 8,412 such permits over the first three quarters of this year, compared to 4,550 in the same period of 2019. Over the same period, Mexican grants of permanent residency are up 48%, reaching 5,418.

“What started off as a pandemic escape for Americans seeking affordable destinations with few Covid-19 restrictions seems to have staying power,” reports Bloomberg. This isn’t just retirees looking for warm breezes and a low cost of living. The increase is also driven in part by the remote working trend, which the Mexican government has encouraged.

Mexico makes it easy for Americans to work south of the border. A tourist visa lets you work there for up to six months, so long as you receive payment outside Mexico. Many Americans repeatedly extend that timeframe by simply returning to the United States and then re-entering Mexico on a new visa, restarting the 180-day clock.

Given that framework, the temporary residence permits represent only a fraction of the actual number of Americans living indefinite stretches in Mexico. The US State Department puts the number at 1.6 million. 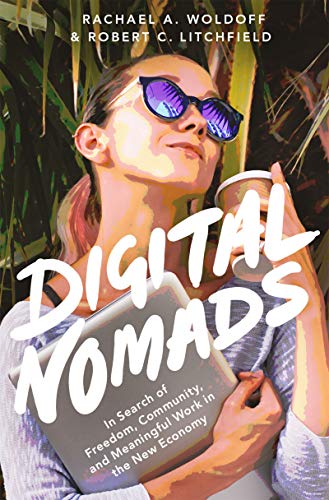 Digital Nomads: In Search of Freedom, Community, and Meaningful Work in the New Economy

Mexico City is the top destination, and that’s a cause for controversy in the city that’s more populous than New York and holds a whopping one-fifth of the country’s entire population:

“The rise in Americans staying longer troubles some locals concerned about the cost of living, especially in some of the historic neighborhoods that are their prime destinations in Mexico City. Social media is rife with complaints about the so-called digital nomads and their supposed impact on rising rents.”– Bloomberg

The Mexico City government, however, is embracing the influx of spenders with open arms. Last week, city officials announced an initiative with Airbnb to promote the city as a great place for remote workers.

“We want now to promote it even more,” said Mexico City Mayor Claudia Sheinbaum, who tried to allay fears that the stream of Americans were nudging rents higher.

Most digital nomads favor expensive neighborhoods, Sheinbaum argued, such as Condesa, Roma and Polanco. Rents in Condesa, which the UK Evening Standard dubbed “Mexico City’s coolest neighbourhood,” rose 32% over the first half of 2022.

One such American nomad was profiled in a recent CNN report on the trend. Erik Rodriguez, a 37-year-old economic development analyst for a US-based agency who speaks little Spanish, moved to Mexico City to save money and enjoy the lifestyle.

In doing so, he moved from a studio apartment in San Diego to a one-bedroom apartment in Mexico City — and slashed his rent from $2,500 to $800.

On the other side of the coin, the same report told the story of a family restaurant that was priced out of the trendy Roma neighborhood after being a fixture there for 54 years.

“Prices are much higher,” said one of five siblings who’d taken over the business from their father. “It’s difficult because a lot of these foreigners come, and they have a bunch of money to be able to spend on these apartments and rents.”

Others complain that the latest waves of Americans make little effort to learn Spanish and expect the employees at the restaurants and shops they patronize to speak English. “It’s not as though there’s an interest to participate and understand the local culture here,” one local told CNN.

Despite the discontent, don’t expect the Mexican government to start building its own wall anytime soon: Americans in Mexico generated $11.5 billion in revenue for the country in the first five months of this year alone.

Meanwhile, the continued splintering of American society will have many more gringos casting their wandering eyes south of the border.