Last week, the government announced that it does not want to try Khalid Shaikh Mohammed and four of his colleagues whom it claims are the remaining conspirators of the attacks on 9/11.

All five are awaiting trial at the U.S. Naval Base in Guantanamo Bay, Cuba. The allegations are that these five conspired to commit mass murder, a capital offense. Even though conspiracy is not a war crime, the feds are planning to try these defendants before a military tribunal under the rules utilized in federal criminal trials.

All five were detained from around 2003 to 2006 at CIA black sites, where they were kept in solitary confinement and egregiously tortured. After the CIA torture was concluded, the five were transferred to military custody at Gitmo in 2006.

There, the tortures resumed until FBI agents arrived to interrogate them. For all of its faults in other cases, the FBI put a stop to the military torture and solitary confinement.

The decisions to have the CIA torture these detainees, not to charge them with capital offenses in federal district courts in the U.S. as the Constitution mandates, to implement military torture, to charge these folks with crimes not recognized under the laws of war before military tribunals, to scuttle the constitutionally mandated jury system, and to keep the Department of Justice out of these cases were all made by the legally ignorant, Constitution-defying President George W. Bush.

After 12 years of litigation and numerous changes in the prosecution teams and the judges hearing the case, as a result of Bush’s profound incompetence, the feds are giving up on trying these men.

Here is the backstory.

The guarantee of due process in the Bill of Rights protects persons, not just Americans. The only exception to this principle is for crimes against the laws of war. If the United States is at war with the government of a foreign country and its agents or troops harm American civilians, even then, basic due process applies, yet treaties to which the U.S. is a party permit military tribunals as the venue for the trials of war crimes.

If crimes are committed by foreign civilians against American civilians in America, the venue for the prosecution of the foreign civilians is the federal district court that is physically nearest to the scenes of the crimes. In the case of 9/11, that would be Manhattan for the World Trade Towers; Arlington, Virginia, for the Pentagon; and central Pennsylvania for the crash in Shanksville. 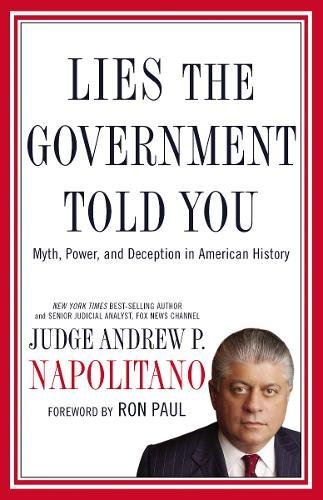 Lies the Government Told You: Myth, Power, and Deception in American History

But Bush would have none of this. He must have been terrified that he’d be called to account for his failures on 9/11, hence his belligerence in Afghanistan and Iraq, his orders for criminal torture and his firm determination that the 9/11 detainees not get fair jury trials, but rather military tribunals, where, to his primitive way of thinking, the detainees were more likely to be convicted quickly and sentenced to die.

Last week, the military judge presiding over these cases — the only cases at Gitmo involving 9/11 — adjourned all pre-trial hearings and the trial date pending plea negotiations. The government, which seeks the death penalty and has not yet publicly shown its hand, claims that the evidence of the guilt of these defendants is overwhelming.

If the government’s claims are truthful, then why the adjournment for plea negotiations?

Enter Majid Khan. Khan is a Pakistani-born and American-raised young man who was tortured by the CIA for three years and then brought to Gitmo. The charge against him was delivery of cash to colleagues in Indonesia who used the money to destroy a hotel in Jakarta at which some Americans were killed. Rather than contest the charges against him, Khan pleaded guilty.

Because the government had charged him with a capital offense — accomplice to murder — he was entitled to a hearing before a jury that would sentence him.

At Khan’s sentencing hearing, he recounted to his military jury the horrific tortures visited upon him by the CIA at one of its foreign black sites. The government presented no evidence to contradict Khan’s testimony. This may have been the first time in American history where a criminal defendant claimed the government tortured him and the government did not challenge those claims.

Now, back to Khalid Shaikh Mohammed. He was tortured for four years during which the CIA and the military used the same techniques on him as they did on Khan. The government fears that Mohammed, who is now fluent in English, will be able to relate to his jury and to the public and press at his trial the horrors visited upon him by the government.

The government also fears Mohammed’s articulation of a necessity defense, which would enable him and his expert witnesses to show all the wrongs the U.S. government committed upon innocents in the Middle East, going back to the CIA’s overthrow of a popularly elected secular leader in Iran during the Eisenhower administration.

Look at what George W. Bush has wrought! President Joe Biden has a Hobson’s choice: accept a plea with life imprisonment or permit a trial at which American foreign policy will be trashed. Bush’s unfathomable ignorance of the basic principles of law, his schoolyard determination to appear tough, and his willingness to torture and slaughter in order to divert the eyes of history from his own failure to see 9/11 coming have brought about monumental injustices at his $10 billion Devil’s Island.

Gitmo should be razed, Bush should be tried for war crimes, and the rule of law should be returned to all prosecutions.

Andrew P. Napolitano [send him mail], a former judge of the Superior Court of New Jersey, is the senior judicial analyst at Fox News Channel. Judge Napolitano has written seven books on the U.S. Constitution. The most recent is Theodore and Woodrow: How Two American Presidents Destroyed Constitutional Freedom. To find out more about Judge Napolitano and to read features by other Creators Syndicate writers and cartoonists, visit creators.com.

Be the first to comment on "Bush, Guantanamo and the Rule of Law"