Akron, OH — Before he was filled with taxpayer-funded bullets in July 2022, Jayland Walker, 25, was a standout wrestler at Buchtel High School, where he graduated in 2015. According to his family, he worked for Amazon, took a job driving for DoorDash and was set to get married. All of this is over now, however, after multiple officers decided to dump more than a dozen rounds each into Walker’s body after he fled a traffic stop for a simple violation.

Now, despite the fact that these officers executed — in firing-squad fashion — an unarmed man on video, they are all quietly going back to work. Akron Police Chief Steve Mylett says he needs the killer cops back on the force because the department is understaffed.

“I need as many people as I can muster so I don’t have to cut services to the community,” Mylett said. “So much so that I consider it a crisis—staffing levels in our police department—to the point where I’m being put in a position where I may end up having to decide to cut some services that we provide to the community because we just don’t have enough people. And that’s certainly something I do not want to do.”

Mylett said the officers — although they are coming back on duty — will be on administrative leave, internally. They will handle administrative work inside the department instead of being on patrol, where they fill unarmed young men with dozens of bullet holes.

“I believe it will make a significant difference because every call that an officer is able to handle over the telephone is one less response by a field officer, and that keeps officers in the neighborhood and free to answer other 911 calls, higher priority calls. I have looked to my deputy chiefs to assign the officers appropriately. And they’re doing that,” he said.

Mylett says dozens of officers have left the department this year, and he anticipates there will likely be more. Upon the news of the unnamed officers returning to work, Ken Abbarno and Bobby DiCello, the attorneys for the Walker family, released the following statement:

The planning behind the decision to reinstate the police officers involved in this summer’s tragic killing of Jayland Walker is callous and ignores the Walker family’s needs for a fair process.

The decision to reinstate these officers – even to desk duty – fails to take into account a pending investigation into their actions that culminated in Jayland’s brutal shooting and unjustifiable death resulting from a barrage of more than 90 bullets. This decision undermines the legitimacy of the investigative process the Walker family has been asked to follow and which BCI has led to this point. On behalf of the Walker family, we call on the City of Akron to do the right thing and place the officers back on leave until the investigation has been completed.

As we reported at the time, days after he was killed, officials released the body-camera footage from Walker’s killing and the chief himself admitted that it was hard to determine what provoked the officers to fire their weapons. 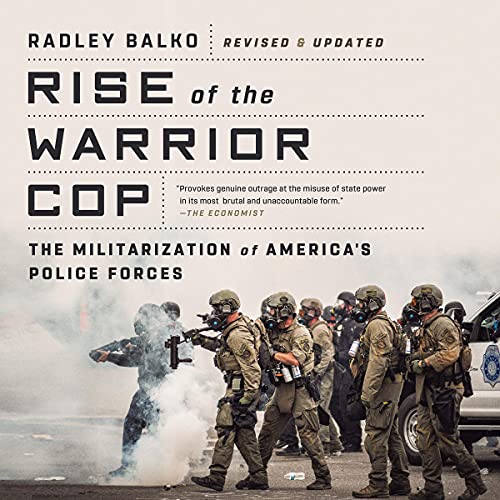 Rise of the Warrior Cop: The Militarization of America’s Police Forces

Chief Mylett said in still photos of the footage, it appears Walker was reaching down to his waist but admitted Walker did not have a gun on him when he was killed.

Laughably, the Fraternal Order of Police in Akron described the shooting as being “consistent with the use of force protocols and officers’ training.”

According to DiCello, the lead attorney for the Walker family, prior to fleeing the traffic stop that night, Walker had no criminal record.

“Jayland, not one time in his life, and you can search this city, this state and this country— never offended or bothered a soul. And how these events took place leaves us with many, many questions,” said DiCello at a press conference after the body cam footage was released. “Our job, by doing this press conference, is to remind the police department for the city of Akron that we are here for accountability.”

According to police, an officer attempted to pull over Walker around 12:30 a.m. on Monday for a “traffic equipment violation” but for some reason he refused to stop. A chase ensued and would last four and a half minutes. Video from traffic cameras shows that in this short time, the single cruiser following Walker multiplied into a whopping 10 cruisers.

Police would claim that Walker fired a gun from his vehicle during the pursuit and a gun and spent round were found inside. Captain Dave Laughlin, of the Akron Police Department, told the press that officers didn’t see a weapon but heard a gunshot or multiple gunshots from the car on the entrance ramp of Route 8.

Police claim Walker then came to a stop before exiting the vehicle and fleeing on foot. That’s when he was chased down by cops and executed.

“Actions by the suspect caused the officers to perceive he posed a deadly threat to them. In response to this threat, officers discharged their firearms, striking the suspect,” the police statement said prior to the footage being released.

“We know that no police officer ever wants to discharge their service weapon in the line of duty,” the mayor and chief said in a joint statement. “And anytime they must, it’s a dark day for our city, for the families of those involved, as well as for the officers.”

However, officers who don’t want to fire their weapons won’t dump 60 rounds into a person who was unarmed.

“I know a lot of people like to say that their loved ones are good,” said Lajuana Walker-Dawkins, whom Walker called “Aunt Mini.” “But it’s the truth.

“We want you to know who Jayland was. We don’t want him to be portrayed as some thug,” the aunt said of the “skinny little nephew” she misses dearly.

Should Walker have fled police? No. Should he have run? No. Did he deserve to die for these acts? No.

Be the first to comment on "8 Cops Who Shot Fleeing Unarmed Man 46 Times, All Quietly Return to Work Because Dept. “Understaffed”"