Americans get fed a lot of BS when it comes to price inflation. Prices in the U.S. are rising faster than they were in the late 1970s when gasoline shortages triggered an economic crisis.

Meanwhile, there has been a dramatic rise in dishonesty amongst politicians, bankers, and the corporate press on this subject. They hide the truth on inflation for a couple of reasons.

For starters, the establishment doesn’t want people alarmed to the point of dumping dollars and fixed-rate debt such as U.S. Treasuries. Officials need strong demand for both, because the supply they are producing is so massive.

U.S. debts and obligations are much too large to be honored – at least in today’s Federal Reserve Note “dollars.” The politically expedient option is a default through currency debasement – lessening the real burden of debt and entitlement obligations.

The key is to keep Americans docile, holding onto Federal Reserve Notes and Treasury debt, and getting gradually poorer.

The same is true in other nations as well. Andrew Bailey, Governor of Britain’s central bank, said the quiet part out loud last week:

“In the sense of saying, we do need to see a moderation of wage rises. Now that’s painful. I don’t want to, in any sense, sugar that… it is painful. But we need to see that in order to get through this problem more quickly,”

He wants the British to stand there and take it. It didn’t go over too well.

He probably won’t slip up and tell the truth again. Officials certainly do not want people angry about rising prices.

President Biden is feeling some heat of his own. It would be much worse if people knew the truth, but most don’t.

The modern Consumer Price Index (CPI) is a form of deception. The chart below shows the difference between the heavily managed CPI number published by the BLS versus the 1980 method. We covered the tricks officials have been using to disguise the rapid decline of the dollar last week. 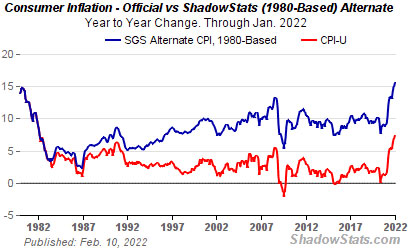 Most Americans would be surprised to know if price inflation was calculated using the same methodology the Bureau of Labor Statistics used during the 1980 peak, inflation would officially be worse now than it was then.

Rigging the data isn’t the only way officials mislead people. In Joseph Goebbels style, a good part of the strategy is telling good, old-fashioned lies so often people will accept them as truth.

Here are a couple examples of the lies:

Today’s mounting inflation crisis is very different from the one forty years ago. Fed bankers have nowhere near the leeway to hike interest rates and bring surging prices back under control.

The equity markets cannot stomach rates above the low single digits. Markedly higher interest rates would also blow up the federal budget as well as destroy the U.S. banking system.

People should simply expect more of the inflation disinformation campaign and invest as if prices are rising twice as fast as they are being told.