Register for free for the Uncensored Crypto docuseries. You have a chance to win $5,000 in Free Bitcoin just for watching! Episode 0 will be available until 7:30 PM EST on Sunday, January 16. What Made BTC The Most Popular Cryptocurrency Of 2021?

The free Amazon Prime videos below are an easy, fun way to learn a lot about bitcoin quickly.

The Rise and Rise of Bitcoin compares the blockchain and bitcoin to the rise of the internet. It is a must-see film which shows that the technology behind bitcoin can revolutionize much more than money. The 2019 Cryptocurrency Explained is one of the quickest introductions.

Cryptopia: Bitcoin, Blockchains, and The Future of the Internet is a 2020 film which says the blockchain on which bitcoin is built is bigger than the internet, the Iron Age, the Renaissance, and the Industrial Revolution! It describes bitcoin as one of the most exciting inventions in history. It says, “If you don’t think bitcoin is already changing the world’s concept of money, you haven’t been paying attention.” The film discusses some of the problems with “alt coins” – cryptocurrencies other than bitcoin.

Bitcoin Beyond The Bubble says that the blockchain and bitcoin are going to change everything including voting. It says the technology is really going to revolutionize Latin America, Africa, South East Asia, etc.

The Bitcoin Story discusses the clash of ideals as bitcoin goes mainstream. Bitcoin Gospel asks: “Is bitcoin the blueprint for a bankless currency? It exists, and some people consider it to be the digital version of gold: bitcoin.”

Mastering Bitcoin For Beginners is a free 2018 series with 10 Episodes in Season 1 on Amazon Prime.

How To Buy, Store, and Use Bitcoin

The number of Americans invested in cryptocurrencies almost doubled from 7.95% in 2018 to 14.4% in 2019, an increase of 81% in one year. The easiest way to get started is to ask someone who has invested in bitcoin for help. It’s remarkable how easy it is then. Finder’s Guide to Cryptocurrencies provides key terms. The free 7-day online Bitcoin Crash Course continues to provide information after the first week.

You need a “wallet” to buy, store, and sell your bitcoins and there are several kinds of wallets. Coinbase is an exchange that provides an easy wallet to start with. If you buy $100 of bitcoins with this link, you will get $10 in bitcoins. However, your funds will not be as secure online as in a hardware wallet. In 2019, a record-breaking $4 billion was stolen from cryptocurrency exchanges, underscoring just how critical it is for you to control your own assets.

11 Best Cryptocurrency Wallet Apps explains the importance of choosing the right wallet for your goals. A top recommendation for cold storage is the Ledger Nano X hardware wallet. It is the most secure wallet and allows you to trade on the go. See How To Use A Bitcoin Hardware Wallet: Ledger Nano X and the unboxing tutorials. A back-up pack provides extra security. The videos stress the importance of buying from Ledger. Amazon also sells a case for the Nano S which is also good for storing the Nano X.

After you get a wallet, you can buy cryptocurrencies. It is not necessary to buy a whole bitcoin – which costs about $43,000 now. See the current price at CoinMarketCap. The satoshi is the smallest unit of the bitcoin recorded on the blockchain. It is a one hundred millionth of a bitcoin (0.00000001 BTC). So, one bitcoin is 100,000,000 satoshis. The unit was named for Satoshi Nakamoto who is credited with creating the blockchain and introducing bitcoin in 2009.

If you use a private online wallet like Jaxx.io, secure your 12-word Back Up Phrase! If you lose it, you will lose all your cryptocurrencies in that wallet! There will be no way to recover your password or your money! So, keep a printed copy in your safe or another secure place you will remember. Jaxx Wallet Beginner’s Guide. DeFi vs CeFi: How DeFi Measures Up discusses some of the risks.

Christopher Giancarlo, the former chairman of the Commodity Futures Trading Commission (CFTC) who goes by the name “Crypto Dad”, provides very helpful YouTube videos on the use of Coinbase and the Ledger hardware wallets to store bitcoin. His Crypto Basics Live Q&A Hour is on YouTube every Tuesday morning from 9-10 AM ET. The Wall Street Journal reports: “J. Christopher Giancarlo, who stepped down as chairman of the Commodity Futures Trading Commission last year, said he was creating the nonprofit Digital Dollar Foundation to study converting the dollar into a fully electronic currency based on blockchain, the technology that underpins bitcoin.” The article contains a very informative video about how cryptocurrencies are changing the world now.

The purse.io site offers a 5-10% discount for purchases on Amazon made with bitcoin (BTC) or bitcoin cash (BCH). When you sign up, you get $5 in bitcoins with your first purchase of $100. How To Invest in a Bitcoin IRA: The 5 Best Crypto IRAs says you can shelter up to $7,000 tax-free in a bitcoin IRA each year.  You can use Coin Stats to track your portfolio. Join the Counter Markets Newsletter to keep up-to-date with the crypto world. You save 40% if you pay with a cryptocurrency.

You can also visit the Education section of our partner site Coinivore to read comprehensive reports and guides about getting started.

Quick Introduction To The Blockchain Revolution

When home computers were introduced in the late 1990s, they were just for geeks – until email was available. That was the “killer app” that made a home PC a must-have for millions of Americans and people around the world. During Internet 1.0, newspapers were beginning to go online. With Internet 2.0 came laptops, cellphones, social media, and the sharing economy.

We have gotten used to many technological “revolutions” in the last 20 years. However, we are on the verge of an even greater shift now. Yet, the blockchain revolution is under the radar for most people. Fortunately, now is a good time to take some steps to understand how it is already transforming our world in multiple key ways.

In October 2008, after the collapse of Lehman Brothers, Satoshi Nakamoto published his paper “Bitcoin: A Peer-to-Peer Electronic Cash System” which describes Bitcoin, a digital cryptocurrency. Nakamoto also devised the first blockchain database. “Satoshi Nakamoto” is a pseudonym used by a person or group. So, the real founder of Bitcoin remains a mystery.

People began hearing about the blockchain with the introduction of Bitcoin in 2009. However, few understand how it can be used in the real world. What problems can it solve? The level of change that blockchain technology is bringing to a wide variety of sectors of the economy is something most people are still not aware of.  However, blockchain technology is more disruptive than social media, robotics, or AI. It is the next stage in the internet and holds vast promise for every person, company, and society.

When Bitcoin was introduced in 2009, some people jumped at the opportunity and many became rich. Some lost fortunes. However, many people are still having trouble figuring out how to access the cryptocurrencies.

The chart below shows that the Web grew from 250,000 websites in 1996 to 800 million by 2016. During that time, the amount of user-generated content steadily grew and the direction of published content reversed. Web 1.0 was built on mainframe computers. Web 2.0 used client-server architecture and the cloud. Web 3.0 (the blockchain) uses a decentralized autonomous peer-to-peer (P2P) network. The blockchain now is about where the internet was in the 1990s when newspapers were just figuring out how to put their information online. The Intranet 2.0 introduced many new features. The Blockchain is creating many more.

JP Morgan Chase is America’s largest bank with over $2.62 trillion in assets and is one of the largest banks in the world. In February 2019, J.P. Morgan became the first U.S. bank to create and successfully test a digital coin representing a fiat currency. The JPM Coin is based on blockchain-based technology enabling the instantaneous transfer of payments between institutional clients.JPMorgan has seen an increased interest from global customers in the potential benefits of the bank’s digital coin project which was revealed in mid-February 2019. JPMorgan clients in the U.S., Europe, and Japan have expressed interest in JPM Coin’s ability to speed up securities and bond transactions. The bank’s digital coin has a potential to enable “instant” delivery of bonds via the blockchain.

JPMorgan CEO Jamie Dimon once called bitcoin a “fraud”, but now he’s leading Wall Street’s push into digital currencies. JPM Coins are worth a dollar each and are used to speed up transactions, settlements, and treasury services, Umar Farooq, head of JPMorgan’s blockchain projects, told CNBC. “So anything that currently exists in the world, as that moves onto the blockchain, this would be the payment leg for that transaction,” Farooq told the outlet.

Jamie Dimon has gone from a bitcoin skeptic to a pusher

In the TEDx talk How Blockchain can transform India, Jaspreet Bindra explains that you cannot have a blockchain without a cryptocurrency (or a digital one). Cryptocurrencies are the reward for “mining” which maintains the accuracy of the blockchain. JPM Coin is used simply to facilitate payments.

There are three types of alternative currencies:

Financial Services Revolution: How Blockchain is Transforming Money, Markets, and Banking by Alan Tapscott published in February 2020 is very helpful. 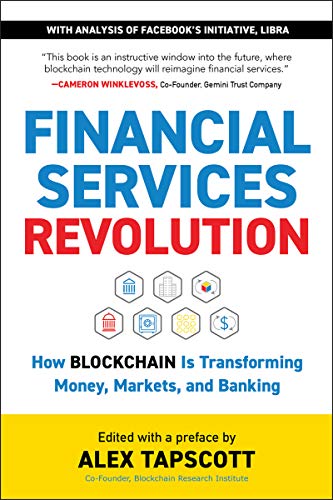 This book offers readers a startling view of how blockchain technology will transform the financial industry in profound ways. Some of the world’s top thinkers in blockchain have contributed chapters that survey the coming digital storm—how it will level the playing field, give individuals more financial power, and create greater transparency in operations.

Written for the educated financial reader, it reveals how blockchain can create a token-based incentive system that aligns the interests of participants in large-scale initiatives, as well as the rewiring of global payment networks and innovative financing methods such as initial coin offerings to fund infrastructure development. The transition for the financial industry is bound to be complicated, but it presents enormous opportunity for those who understand the storm as it’s brewing.

Blockchain is Eating Wall Street is a 2016 TEDx talk by Alex Tapscott.

Disclaimer: This information should not be interpreted as an endorsement of cryptocurrency or any specific provider, service or offering. It is not a recommendation to trade. Cryptocurrencies are speculative, complex, and involve significant risks – they are highly volatile and sensitive to secondary activity. Performance is unpredictable and past performance is no guarantee of future performance. Consider your own circumstances, and obtain your own advice, before relying on this information. You should also verify the nature of any product or service (including its legal status and relevant regulatory requirements) and consult the relevant Regulators’ websites before making any decision. The author may have holdings in the cryptocurrencies discussed