Historically, dealing only with violent, law-breaking criminals, the FBI has tragically morphed into a domestic terror organization under the control of a radical leftist federal administration. This police-state tactic of lawless intimidation must be stopped immediately, first by constitutional sheriffs forbidding the FBI from entering their jurisdictions and, secondly, by Congressional defunding of the agency.

The controllers behind this lawless act are the Great Reset Technocrats who want to crush dissent and all protesters who are bucking their narrative. This attack on a Colorado family is perhaps the most direct attack against Free Speech and the First Amendment in modern times, especially remembering the recent FBI invasion of Project Veritas employees. ⁃ Technocracy News & Trends Editor Patrick Wood

An FBI SWAT team raided the home of an activist mother of three in Colorado on Tuesday, Nov. 16, knocking down her door, bursting into the house and handcuffing her while she was homeschooling her children.

This is the first known case of the federal government making good on its promise to not only intimidate but actually carry out a raid on a mom who was involved in her local school board politics, said Brannon Howse, who interviewed Sheronna Bishop on his live broadcast at Lindell TV Wednesday night. Sheronna broke the story on Lindell-TV an hour earlier on the Lindell Report with host Mike Lindell and co-host Brannon Howse. Howse invited Sheronna to stay over for another thirty minutes and go deeper into her story on his live broadcast.

The U.S. Department of Justice and Attorney General Merrick Garland issued an Oct. 4 memorandum directing federal, state and local law enforcement to look for parents to prosecute nationwide who may have made “threats” and made “harassing” phone calls to school board members nationwide, equating such parents to domestic terrorists.

Now a mother, Sheronna Bishop of Grand Junction, Colorado, has felt the brute force of the FBI’s heavily armed SWAT unit used against her family.

She was at home with her three children Tuesday morning when she heard someone pounding on the front door. She said the officers “manhandled” her 18-year-old daughter, pulling her up the stairs by her hoodie, while another officer put her in handcuffs. They proceeded to search the entire house.

She was at home with her three children Tuesday morning when she heard someone pounding on the front door. She said the officers “manhandled” her 18-year-old daughter, pulling her up the stairs by her hoodie, while another officer put her in handcuffs. They proceeded to search the entire house. 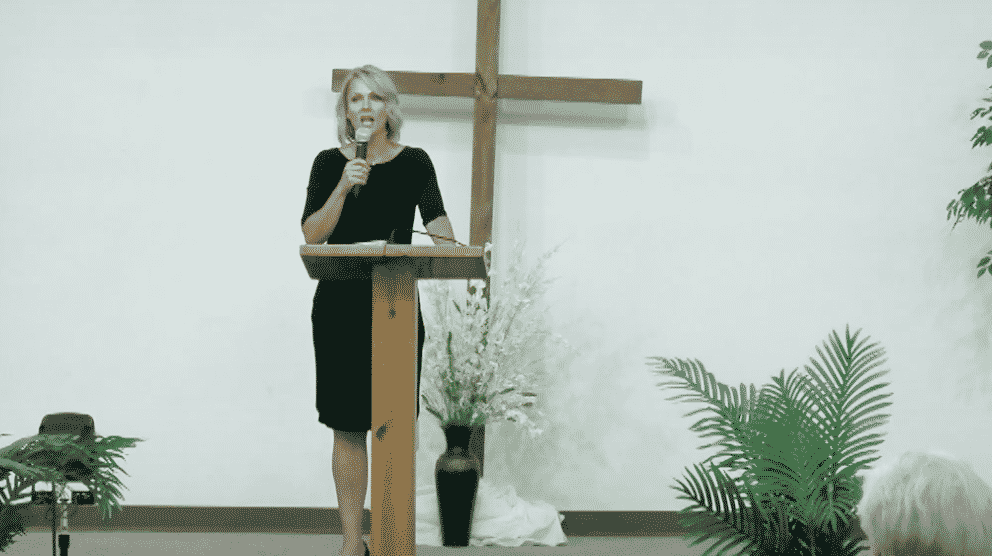 Besides being a frequent attendee at her local school board meetings, Bishop has also been active in the voter integrity movement in her state and locality. She runs the website Americasmom.net, and on that site she features an article and video under the title We the Parents: How Did We Get Here?

She said she has not been guilty of anything but speaking her mind in accordance with her First Amendment rights.

“This is still the United States of America, where we are able to state what we think and we believe,” she told Howse. “There was some pounding on my door. I didn’t really know what to think, I thought at first it might be some neighbor kids. They were pounding profusely, and then it hit me it was the FBI. I took my kids to their bedrooms. They used a battering ram to bash down my door, they cuffed me. And then proceeded to search and go through my whole home.”

“I don’t know anything about this. They couldn’t explain any of this,” she said. “I will tell you why: they were at my home to intimidate me, to shut me up, because I was using my First Amendment rights to advocate for [Mesa County Clerk] Tina Peters on the issue of Dominion [voting machines] and the damage done in our election. And they’ll never be held accountable. Instead they will criminalize this woman who has stood up.”

“I know people will say, well Sheronna, why don’t you just shut your mouth… That’s exactly what they hope you will do. I can open my mouth and say whatever I want to say and that is not a criminal action. This is about their desire to shut you down and stop you from saying it.”

“I’m a law abiding citizen, I’m very supportive of law enforcement,” she continued. “I love the Constitution. And what happened yesterday, what happened is something I never imagined I would experience in America.”

Bishop said she uses her website, AmericasMom.net, to educate and inform parents and moms regarding their children’s education.

“And since then we’ve gotten involved in school board races. I love my state. I’m a fourth generation Coloradan. Most recently I’ve been a very vocal advocate of a candidate [Peters]… She’s had to fight for her own life, and a guess now I’ll have to fight for mine.”

Bishop has been part of a group of parents that have been successful in fighting the teaching of critical race theory and school mask mandates.

“Colorado was able to flip nine school boards this year. We were able to get one of our leftists to resign and we also flipped our school board in the election,” Bishop said. “And people like me are considered domestic terrorists now, because we don’t stand for the policies that have been forced upon our children.”

Howse said history will be kind to Bishop.

Bishop said she has always made a point of being transparent.

“I have always made myself available, I’ve never tried to hide from anything and now for them to bash my door down, manhandle my daughter… I think the timing is really interesting, because we don’t want people to be silent because of what happened to me. If anything I want people to be more vocal,… because this is still America and you still have the right to stand up for yourself and your family.”

“I believe elections have consequences, and in this case this illegitimate regime is having serious consequences for all of America.”

Howse asked if she ever thought she would be targeted in this way by her own government.

“No I never thought in America that a suburban housewife and mom would have her door bashed in by the FBI,” she said.

He asked about her three children.

“My kids are very resilient. And part of schooling them has been to teach them the proper role of government and the proper role of law enforcement and I can’t convince them now that the FBI are good guys. And I really have my own doubts about that now. You cannot just say ‘I followed orders’ to go bash someone’s door down. They are responsible for what they are doing.”

Howse had just concluded a series of interviews with a panel of four retired FBI agents just days before the raid in which they had described similar raids against non-violent patriotic Americans over the last few years, starting with Gen. Michael Flynn in 2016, followed by the pre-dawn raid on author and Trump ally Roger Stone in 2019 and then the violent entering of journalist James O’Keefe of Project Veritas just last week.

“I was on the [FBI] SWAT team for several years,” said Brian Shepard, appearing with three other retired FBI agents at a symposium aired by WVW TV on Nov. 16. “And I can tell you from my experience, and I think all others of the bureau agents here would echo what I’m going to say. We never conducted a search or conducted an arrest of someone who was not a violent offender. And the thought when I heard about what happened with Roger Stone, just outraged me so much that, it just rose up inside me.”

Now, an activist mom has been targeted, raising the question: Has the FBI become the political shock troops for the White House, seeking to harass and intimidate anyone who speaks out against its policies?

Howse said it was obvious that Shepard became emotional when he began talking about how the bureau, he gave the better part of his life to serve, had now taken to bashing down the doors of non-violent American patriots.

“Brian’s reaction is very typical of men in that generation who served in the FBI, and many of those men have responded the same way, because they gave the best years of their lives to the agency, and upheld what they believed were the values of the agency, bravery, integrity and fidelity, and they become emotional when they saw how this has been discarded. They are beside themselves. It happened to others and now it happens to you, within days of our filming [of the panel].”

Bishop said the timing was not lost on her.

“I can’t explain it. I can’t explain being a target, for an agency that typically takes down the cartel, human trafficking, and now I’ve had my children traumatized and if this can happen to me, they’ll come for you too.”

“I made myself completely transparent to them and yet they chose to break down my door, terrorize my kids and try to intimidate me.”

She said the agents took her phone and other devices and kept her handcuffed for at least 30 minutes.

“No, I never had any access to any voting machines. They know I am just a voice, an advocate. We must have been effective. I know the people here, they’re not going to back down, and we’re not going to stop. In times past they never would have moved forward on this, but the narrative in America right now is one that is pushing a progressive narrative of communism. Now you can stay in your home and talk about it privately but you dare not come out and talk about it publicly …or they will send the FBI to your door because according to this regime you are a domestic terrorist.”

“We’ve got to stick together and we can’t let these thugs put us into fear and intimidation.”

Howse said he was shocked by the news of Bishop’s experience.

“I could see them moving against someone like me, or Mike Lindell. It is hard to see them coming after someone like you, to come after a mom, who is working at the school board level and the election level, and to bust your door down? This is totally unprecedented by the agency in how they conducted themselves. So even for someone who has studied communism and a color revolution, the way they are doing it and the pace at which they’re doing it, I never anticipated it to move this fast.”

Be the first to comment on "It Begins: FBI SWATS Mom Who Protested Colorado School Board, Terrorizes Family"