The investigative work of Janet Phelan has long been an integral part of the information readers can expect at Activist Post, particularly in the area of bioweapons. As I detailed in my review of her previous book, Exile, her work has consistently put her in the crosshairs of an establishment that has been more than resistant to her line of questioning. Exile recounted her literal flight, which she was compelled to take in order to continue presenting her findings to the world. Under alarming “person of interest” protocols over the ensuing 7 years, we are fortunate that Ms. Phelan has successfully completed and released a new book which is sure to turn over new rocks and expose further grave misdeeds to the light.

Ms. Phelan presents us with a stunning book centered on the confluence between historical corruption and the seemingly disparate development of a novel coronavirus and its many ongoing variants. As readers will see, it’s imperative to continuously re-examine the past if we are to have any chance at understanding our present and future direction.

At The Breaking Point of History: How Decades of U.S. Duplicity Enabled the Pandemic was released by TrineDay on September 15, 2021. It is a book that contains both a compilation of Janet Phelan’s many pertinent articles offering historical context, as well as a new synthesis that helps us to better read current headlines and extract their darker meaning.

At the heart of Ms. Phelan’s new book is an inquiry into the core structure of the national and international legal agreements to which the U.S. claims it adheres. Rather than placing universal restrictions upon the world’s most powerful warmongers and their mad science divisions of bioweapons and genetic chemical assault, however, the documented history that Janet reveals is one of selective enforcement, at best; with deliberate misapplication and cover-up at worst.

How is it, for example, that Janet Phelan can open her book with this emphatic declaration?

“Shortly after the events of September 2001, it became clear to me that a pandemic would be launched.”

It is precisely because she has been tracking not only the “news” as it has been delivered to us by the consortium of politically controlled outlets, but because she has been diving deep into primary source materials, legal developments, treaties and the all-important funding of an interconnected web that far surpasses the power of elected representatives. Janet’s travels to Geneva, Switzerland’s Biological Weapons Convention have put her in a unique position to examine first hand the operations (and operators) behind the deceit foisted upon the public that world leaders have only our best interests at heart.

Instead, as we traverse the landscape of many decades of research presented in Janet’s articles, we can begin to see a much wider singular plan emerge from the shadows. It is a plan detailed over five sections of her invesigative reporting which chronicle the history of bioweapons programs, genetic engineering, torturous human experimentation, vaccination programs, industrial chemicals, rewritten (and ignored) human rights agreements, and the emergence of full-throttle scientific warfare. Janet’s most explosive revelations – the potential use of the water supply as a vector for new attacks – force us into an uncomfortable examination of the nature of historical genocide and its relevance to current events.

After all that we have seen pass over the previous years of the COVID era, now is the perfect time for Ms. Phelan to have released her findings to the many new readers who have had the veil of disbelief lifted. After global lockdowns, mandates and open tyranny has erupted across Western democracies, forcing economies to collapse and countless millions to enter poverty and worse, can we be so sure that this wasn’t the plan all along?

With exhaustive documentation and visual exhibits, At The Breaking Point of History helps make sense of the chaos and apparently nonsensical “science” that has become a primary tool of enslavement. By offering a detailed blueprint of past events, Janet Phelan’s warnings about what might be coming can help us better prepare and positively contribute to a history that has yet to be fully written.

At The Breaking Point of History: How Decades of U.S. Duplicity Enabled the Pandemic is also available on Amazon. 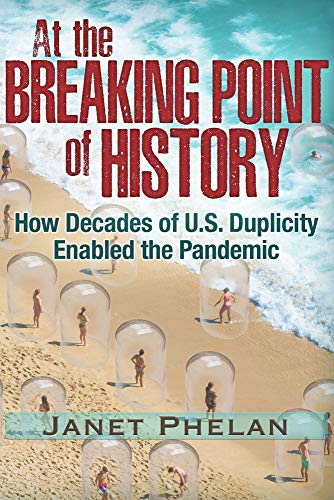 Be the first to comment on "Book Review: “At The Breaking Point of History”"