Internet of Things (IoT) technology has been described as the “Internet of Vulnerable Things” for good reason.  So far its vulnerability has compromised hundreds of millions of critical devices and infrastructure (see 1, 2, 3, 4).

Thanks to Threatpost for reporting another unfortunate situation.

A remote attacker could exploit a critical vulnerability to eavesdrop on live audio & video or take control. The bug is in ThroughTek’s Kalay network, used in 83m devices.

Security researchers have discovered a critical flaw that affects tens of millions of internet-of-things (IoT) devices – one that exposes live video and audio streams to eavesdropping threat actors and which could enable attackers to take over control of devices, including security webcams and connected baby monitors.

The alarm was sounded on Tuesday by Mandiant, in coordination with the Cybersecurity and Infrastructure Security Agency (CISA) and ThroughTek. Mandiant’s Red Team discovered the vulnerability in late 2020.

“CVE-2021-28372 poses a huge risk to an end user’s security and privacy and should be mitigated appropriately,” according to Mandiant’s post. “Unprotected devices, such as IoT cameras, can be compromised remotely with access to a UID and further attacks are possible depending on the functionality exposed by a device.”

The world has already been inundated with tales of what can happen when these kind of devices are misconfigured or riddled with vulnerabilities, and this just adds to the growing pile of scary headlines. For example, in February, a vulnerability affecting multiple baby monitors was found to expose hundreds of thousands of live devices, potentially allowing someone to drop in and view a camera’s video stream.

As Mandiant explained, the flaw would enable adversaries “to remotely compromise victim IoT devices, resulting in the ability to listen to live audio, watch real time video data, and compromise device credentials for further attacks based on exposed device functionality. These further attacks could include actions that would allow an adversary to remotely control affected devices.”

In a Tuesday post, researchers Jake Valletta, Erik Barzdukas and Dillon Franke – who discovered the bug – explained that it’s impossible to compile a comprehensive list of companies and products affected, given how the Kalay protocol is integrated by manufacturers and resellers before devices reach consumers. Though they couldn’t come up with a definitive list of affected companies and products that implement the Kalay platform, they strongly advised users of IoT devices “to keep device software and applications up to date and use complex, unique passwords for any accounts associated with these devices.”

According to ThroughTek, “Kalay” is an indigenous Dawu word that means “handshake,” “symbolizing the universal link in an interconnected world.”

The researchers provided an illustration that gives an example of how it works: The figure below shows a typical device registration process and client connection on the Kalay network. In this example, a user remotely accesses their home network’s Kalay-enabled camera on a mobile app from a remote network: for example, a user would view their home camera’s feed while in a coffee shop or on a mobile phone network 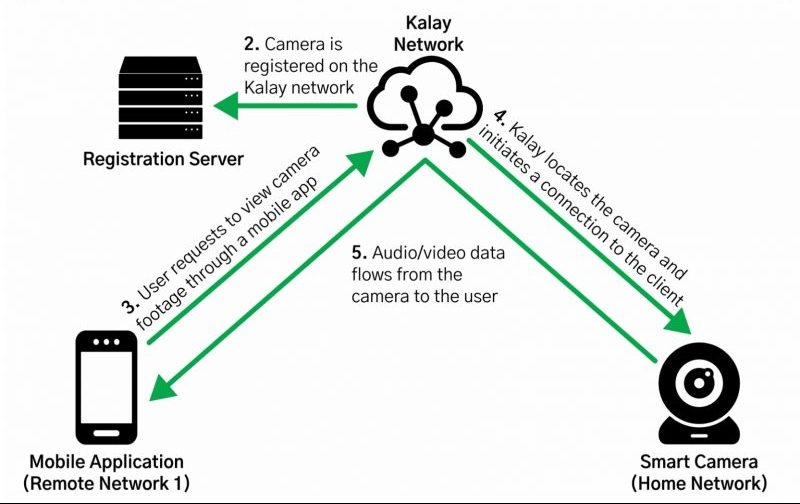 How Many Devices Are Affected? Impossible to Say

To get a high-level view of the scope of potentially affected products and companies, researchers pointed to ThroughTek’s advertising, which boasts of supporting upwards of 83 million active devices and more than 1.1 billion monthly connections on the platform. ThroughTek also supports 250 systems-on-a-chip (SOCs): the microchips that contain all the necessary electronic circuits and parts for small consumer electronic devices, such as smartphones or wearable computers.

Researchers noted that this ThroughTek bug is worse than the critical Nozomi Networks vulnerability disclosed in May: a bug that was already quite severe in that it laid open millions of connected cameras, leaving them prey to having remote attackers get at camera feeds. But besides eavesdropping, this latest Kalay vulnerability means that devices could be remotely controlled by people who have no business tinkering with other people’s baby monitors, webcams or other IoT gadgets, Mandiant said.

“This latest vulnerability allows attackers to communicate with devices remotely,” researchers explained. “As a result, further attacks could include actions that would allow an adversary to remotely control affected devices and could potentially lead to remote code execution.”

How the Bug Works…

Despite all of the above, IoT applications along with 5G are still being installed in U.S. communities and around the world (see 1, 2, 3, 4).  Crazy, right?

Activist Post reports regularly about IoT, 5G, and other unsafe technology.  For more information visit our archives and the following websites:

Be the first to comment on "Webcams, Baby Monitors, and More: Flaw on 83 Million Devices Allows Hackers to Eavesdrop and Take Over Devices"