By Matthew Guariglia and Adam Schwartz

The Chicago Office of the Inspector General (OIG) has released a highly critical report on the Chicago Police Department’s use of ShotSpotter, a surveillance technology that relies on a combination of artificial intelligence and human “acoustic experts” to purportedly identify and locate gunshots based on a network of high-powered microphones located on some of the city’s streets. The OIG report finds that “police responses to ShotSpotter alerts rarely produce evidence of a gun-related crime, rarely give rise to investigatory stops, and even less frequently lead to the recovery of gun crime-related evidence during an investigatory stop.” This indicates that the technology is ineffective at fighting gun crime and inaccurate. This finding is based on the OIG’s quantitative analysis of more than 50,000 records over a 17-month period from the Chicago Police Department (CPD) and the city’s 911 dispatch center.

Even worse, the OIG report finds a pattern of CPD officers detaining and frisking civilians—a dangerous and humiliating intrusion on bodily autonomy and freedom of movement—based at least in part on “aggregate results of the ShotSpotter system.” This is police harassment of Chicago’s already over-policed Black community, and the erosion of the presumption of innocence for people who live in areas where ShotSpotter sensors are active. This finding is based on the OIG’s qualitative analysis of a random sample of officer-written investigatory stop reports (ISRs).

The scathing report comes just days after the AP reported that a 65-year-old Chicago man named Michael Williams was held for 11 months in pre-trial detention based on scant evidence produced by ShotSpotter. Williams’ case was dismissed two months after his defense attorney subpoenaed ShotSpotter. This and another recent report also show how ShotSpotter company officials have changed the projected location and designation of supposed gun shots in a way that makes them more consistent with police narratives.

There are more reasons why EFF opposes police use of ShotSpotter. The technology is all too often over-deployed in majority Black and Latinx neighborhoods. Also, people in public places—for example, having a quiet conversation on a deserted street—are often entitled to a reasonable expectation of privacy, without microphones unexpectedly recording their conversations. But in at least two criminal trials, one in Massachusetts and one in California, prosecutors tried to introduce audio of voices from these high-powered microphones. In the California case, People v. Johnson, the court admitted it into evidence. In the Massachusetts case, Commonwealth v. Denison, the court did not, ruling that a recording of “oral communication” is prohibited “interception” under the Massachusetts Wiretap Act.

Most disturbingly, ShotSpotter endangers the lives and physical safety of people who live in the neighborhoods to which police are dispatched based on false reports of a gunshot. Because of the uneven deployment of ShotSpotter sensors, these residents are disproportionately Black and Latinx. An officer expecting a civilian with a gun is more likely to draw and fire their own gun, even if there was in fact no gunshot. In the words of the Chicago OIG: “there are real and potential costs associated with use of the system, including … the risk that CPD members dispatched as a result of a ShotSpotter alert may respond to incidents with little contextual information about what they will find there—raising the specter of poorly informed decision-making by responding members.”

The Chicago OIG report is also significant because it signals growing municipal skepticism of ShotSpotter technology. We hope more cities will join Charlotte, North Carolina, and San Antonio, Texas, in canceling their contracts with ShotSpotter—which is currently deployed in over 100 U.S. cities. Chicago itself has just renewed its ShotSpotter contract, which cost the city $33 million between August 20, 2018 and August 19, 2021. 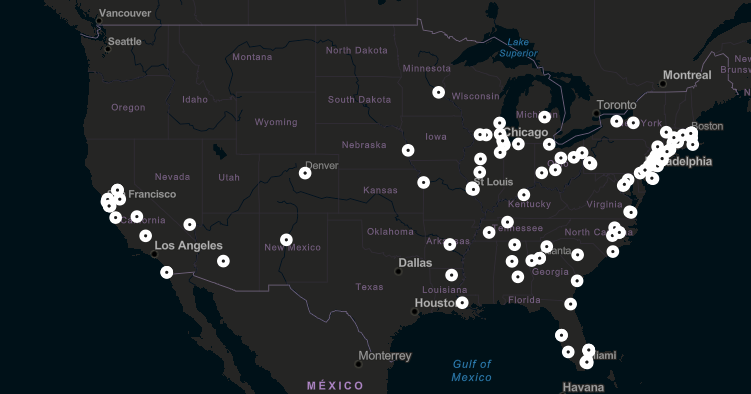 According to EFF’s Atlas of Surveillance, at least 100 cities in the United States use some kind of acoustic gunshot detection, including ShotSpotter.

The Technology Is Not Effective at Fighting Gun Violence

The OIG report’s findings are very clear. Despite what the ShotSpotter marketing team would have you believe about their technology’s effectiveness, the vast majority of ShotSpotter alerts cannot be connected with any verifiable shooting incident. According to the OIG, just 9% of ShotSpotter alerts with a reported disposition (4,556 of 41,830) indicate evidence of a gun-related criminal offense. Similarly, just 2% of all Shotspotter alerts (1,056 of 50,176) correlate to an officer-written ISR.

Likewise, a 2021 report by the MacArthur Justice Center, quoted by the OIG, found that 86% of incidents in which CPD officers responded to a ShotSpotter alert did not result in the completion of a case report. In only 9% of CPD responses to ShotSpotter alerts is there any indication that a gun-related criminal offense occurred.

As Deputy Inspector General for Public Safety Deborah Witzburg said about this report, “It’s not about technological accuracy, it’s about operational value.” She added:

“If the Department is to continue to invest in technology which sends CPD members into potentially dangerous situations with little information––and about which there are important community concerns–– it should be able to demonstrate the benefit of its use in combatting violent crime. The data we analyzed plainly doesn’t do that. Meanwhile, the very presence of this technology is changing the way CPD members interact with members of Chicago’s communities. We hope that this analysis will equip stakeholders to make well-informed decisions about the ongoing use of ShotSpotter technology.”

Cross referencing the officer-written ISRs with ShotSpotter alerts, the OIG found a pattern of police conducting stop-and-frisks of civilians based at least in part on aggregate ShotSpotter data. This means police are deciding who to stop based on their supposed proximity to large numbers of alerts. Even when there are no specific alerts the police are responding to, the concentration of previous alerts in a specific area often works its way into police justification for stopping and searching a person.

The Fourth Amendment limits police stop-and-frisks. In Terry v. Ohio (1968), the Supreme Court held that police need “reasonable suspicion” of crime to initiate a brief investigative detention of a suspect, and need reasonable suspicion of weapon possession to conduct a pat-down frisk of that suspect. One judicially-approved factor that can give rise to reasonable suspicion, in conjunction with other factors, is a suspect’s presence in a so-called “high crime area.”

In light of the OIG and MacArthur reports, which show that the overwhelming majority of ShotSpotter “alerts” do not lead to any evidence of a gun, aggregate ShotSpotter data cannot reasonably be used as evidence that an area is high in crime. Therefore, courts should hold that it violates the Fourth Amendment for police to stop or frisk a civilian based on any consideration of aggregate ShotSpotter alerts in the area.

Specific cases highlighted in the OIG report demonstrate the way that aggregate ShotSpotter data, used as a blank check for stops and searches, erodes civil liberties and the presumption of innocence. In one case, for example, police wrongly used the prevalence of ShotSpotter alerts in the area, plus a bulge in a person’s hoodie pocket, to stop and pat them down, after they practiced their First Amendment right to give police the middle finger.

Far too often, police departments spend tens of millions of dollars on surveillance technologies that endanger civilians, disparately burden BIPOC, and invade everyone’s privacy. Some departments hope to look proactive and innovative when assuaging public fears of crime. Others seek to justify the way they are already policing, by “tech washing” practices and deployments that result in racial discrimination. Like predictive policing, police departments use ShotSpotter and its aura as a “cutting-edge” Silicon Valley company to claim their failed age-old tactics are actually new and innovative. All the while, no one is getting any safer.

The Chicago OIG report demonstrates that ShotSpotter “alerts” are unreliable and contribute to wrongful stop-and-frisks. It may not recommend that cities stop using ShotSpotter—but EFF certainly will, and we think that is the ultimate lesson that can be learned from this report.

Be the first to comment on "Chicago Inspector General: Police Use ShotSpotter to Justify Illegal Stop-and-Frisks"