By Matthew Guariglia and Karen Gullo

In March 2016, “smart” doorbell camera maker Ring was a growing company attempting to market its wireless smart security camera when it received an email from an officer in the Los Angeles Police Department (LAPD) Gang and Narcotics Division, who was interested in purchasing a slew of devices.

The Los Angeles detective wanted 20 cameras, consisting of 10 doorbell cameras and 10 “stick up” cameras, which retailed for nearly $3,000. Ring, headquartered in nearby Santa Monica, first offered a discount but quickly sweetened the deal: “I’d be happy to send you those units free of charge,” a Ring employee told the officer, according to emails released in response to California Public Records Act (CPRA) requests filed by EFF and NBC’s Clark Fouraker. These emails are also the subject of a detailed new report from the Los Angeles Times.

Ring offered nearly $3,000 worth of camera equipment to the LAPD in 2016, to aid in an investigation.

A few months later, in July 2016, Ring was working with an LAPD officer to distribute a discount code that would allow officers to purchase Ring cameras for $50 off. As a growing number of people used his discount code, Ring offered the officer more and more free equipment. 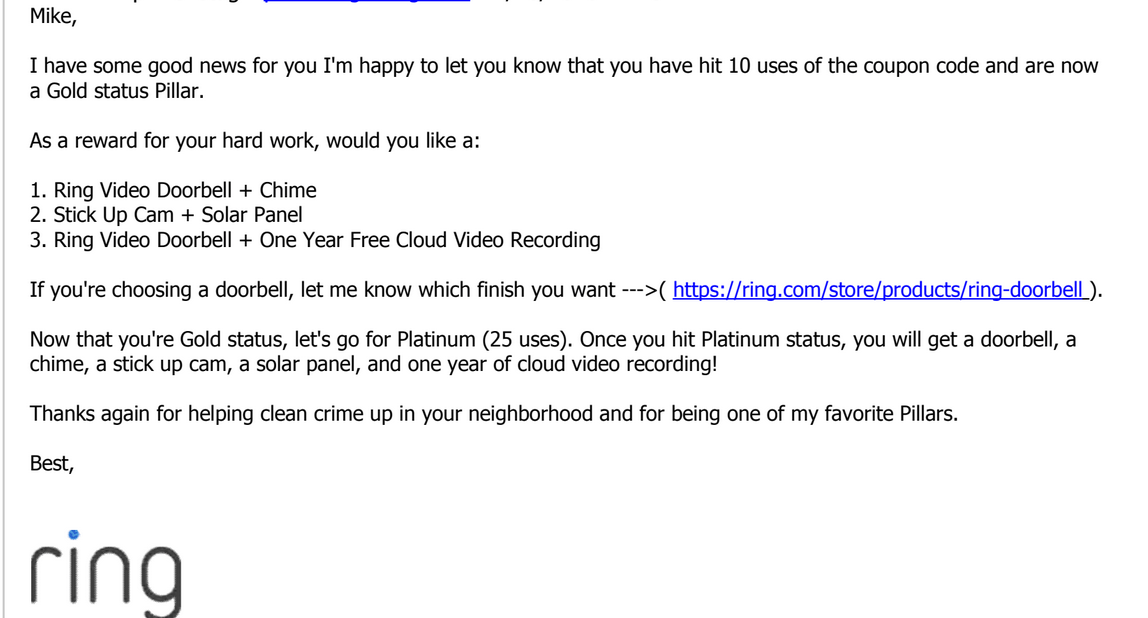 Officers were offered rewards based on how many people had used their personal coupon codes to order products.

These officers receiving free equipment, either for an investigation or for their “hard work” helping to promote the sale of Ring through discount codes, were not isolated incidents. Across the LAPD—from the gang division in Downtown to community policing units in East Los Angeles and Brentwood—Ring offered, or officers requested, thousands of dollars’ worth of free products in exchange for officers’ promotion of Ring products to fellow officers and the larger community, seemingly in violation of department prohibitions on both accepting gifts from vendors and endorsing products.

In another incident, the LAPD asked Ring for cameras to aid in an investigation involving a slew of church break-ins. Ring offered to send the police a number of cameras free of charge, but not without recognizing a marketing opportunity: “If the church sees value in the devices, perhaps it’s something that they can talk about with their members. Let’s talk more about this on the phone, but for now, I’ll get those devices sent out ASAP.”

While offering free cameras to aid in a string of church robberies, a Ring representative suggested marketing the cameras to the church’s members.

The LAPD released over 3,000 pages of emails from 2016 between Ring representatives and LAPD personnel in response to the CPRA requests. The records show that leading up to Ring’s official launch of partnerships with police departments—which now number almost 150 in California and over 2000 across the country—Ring worked steadily with Los Angeles police officers to provide free or discounted cameras for official and personal use, and in return, the LAPD worked to encourage the spread of Ring’s products throughout the community. The emails show officers were ready to tout the Ring camera as a device they used themselves, one they “love,” “completely believe in,” and “support.”

In an email, an employee of the LAPD says they recommend Ring’s doorbell camera to everyone they meet.

For over a year, EFF has been sounding the alarm about Ring and its police partnerships, which have in effect created neighborhood-wide surveillance networks without public input or debate. As part of these partnerships, Ring controls when and how police speak about Ring—with the company often requiring final say over statements and admonishing police departments who stray from the script.

Racial justice and civil liberties advocates have continually pointed out how Ring enables racial profiling. Rather than making people feel safer in their own homes, Ring cameras can often have the reverse effect. By having a supposed crime-fighting tool alert a user every time a person approaches their home, the user can easily get the impression that their home is under siege. This paranoia can turn public neighborhoods filled with innocent pedestrians and workers into de facto police states where Ring owners can report “suspicious” people to their neighbors via Ring’s Neighbors social media platform, or the police. In a recent investigation, VICE found that a vast majority of people labeled “suspicious” were people of color. Ring, with its motion detection alerts, gives residents a digitally aided way of enforcing who does and does not belong in their neighborhood based on their own biases and prejudices.

These emails further add to these concerns, as they point to a scheme in which public servants have used their positions for private gain and contributed to an environment of fear and suspicion in communities already deeply divided.

When confronted by police encouraging residents to mount security cameras, people should not have to decide whether their local police are operating out of a real concern over safety—or whether they are motivated by the prospect of receiving free equipment.

EFF has submitted a letter raising these concerns and calling on the California Attorney General to initiate a public integrity investigation into the relationship between Ring and the LAPD. The public has a right to know whether officers in their communities have received or are receiving benefits from Ring, and whether those profits have influenced when and if police have encouraged communities to buy and use Ring cameras. Although the incidents recorded in these emails occurred primarily in 2016, Ring’s police partnerships and influence have only spread in the resulting years. It’s time for the California Department of Justice to step in and use its authority to investigate if and when Ring wielded inappropriate influence over California’s police and sheriff’s departments.

EFF’s Letter to the California Department of Justice on the relationship between the LAPD and Ring:
https://www.eff.org/document/eff-letter-ca-ag-lapdring